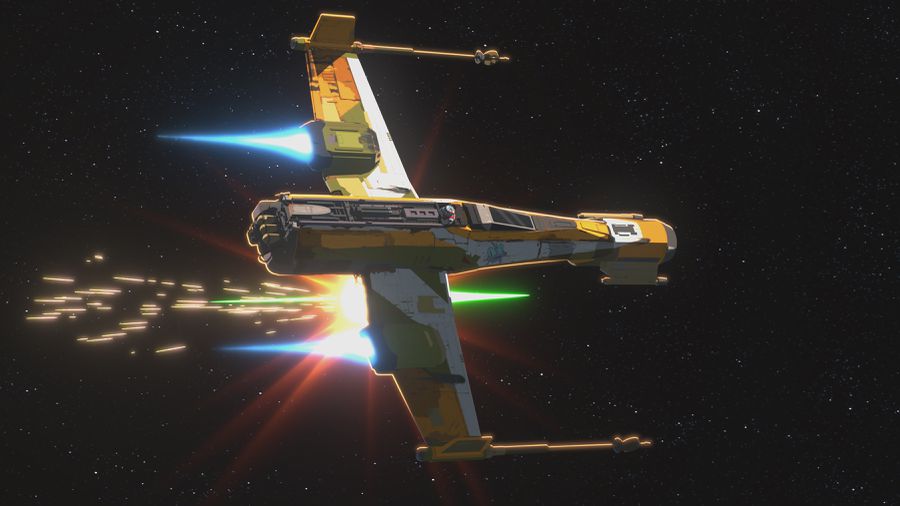 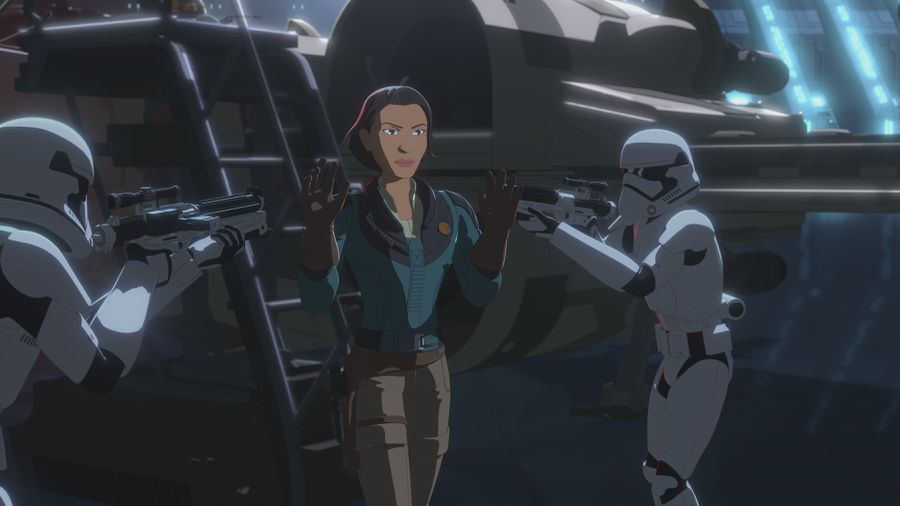 We start off in the middle of a dogfight, as the station is under attack from a Star Destroyer and a squadron of TIE Fighters.

They are waiting for the say so from Doza before they can leave but they are getting outmatched and are in trouble. On the bridge, 4D informs them their shields are just about spent and Doza mutters to himself, where is she?

So, its clear they are supposed to meet someone at this rendezvous point but probably werent expecting the First Order. Torra tells Doza they cant wait for her any longer so he gives the order to leave.

The second they leave an X-Wing comes out of hyperspace and a woman pilot is surprised to see the First Order as well. Shes quite skilled and manages to take out a couple of TIEs before being caught in the Star Destroyers tractor beam. Accepting her fate, her and her droid devise a plan.

Shes greeted in the hangar by Agent Tierny and some Troopers but refuses to give up any information. They try to hack her droid and ship, but she has deactivated them both, sabotaging the files. Tierny has her taken to the detention bay to extract more information.

Back at the Aces lounge, theyre frustrated about getting whipped again and are confused by Dozas decision to give away their position for no good reason. Torra gets angry and defends her father saying, you have no idea what my family has given up protecting this platform. She storms out.

On the Star Destroyer, as the X-Wing pilot is being led away, they run into Tam and Jace in the hallway. Jace is stirring the pot again, telling Tam that Doza was probably lying to them the entire time, a member of the Resistance from the beginning. As the two groups pass each other, Tam recognizes the pilot but tells Jace not to say anything.

Back at the station, Kaz and Neeku are in the hangar and Kaz is concerned about the way Torra is acting, saying its out of character. Neeku tells Kaz that they act this way the same day each year. Every year on this exact date they would leave Castilon to an undisclosed location.

Kaz notices these trips started six years ago, the same time General Organa formed the Resistance. He runs off to find Doza.

In his office, Torra is concerned about the X-Wing pilot who isnt responding to her commlink. She wants to return to the rendezvous point but Doza forbids it, saying its too dangerous.

Kaz runs in saying that hes figured out they are trying to contact the Resistance, and that he can help since hes a part of that group. Torra tells him theyre not actually looking for all the Resistance, just one member, her mother! Thats right, were finally getting to meet Torras mother and Dozas wife!

Yeager pulls Kaz aside and swears him to secrecy. He tells Kaz that he and Venisa (Tasia Valenza) go way back, having been pilots for the Rebellion, and that it was she that got Doza to defect. He got out before the First Order came to power, not wanting to participate in another war, but she was determined to fight. Yeager tells Kaz that shes as fearless as they come. 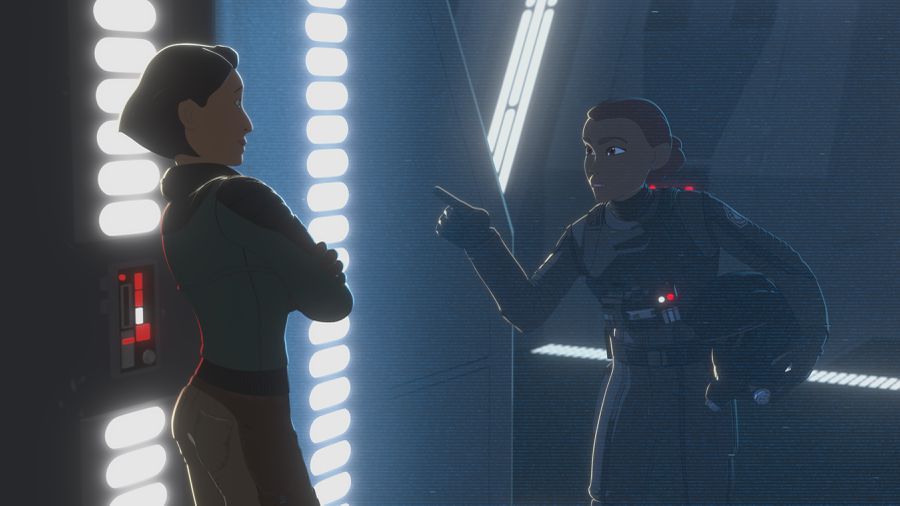 Back at the holding cells, Tam goes to visit Venisa, and asks if theyve ever met before. Venisa gets her to remove her helmet and asks her name. Tam responds with DT-533 and Venisa tells her its not too late, to leave the First Order and start anew. She also tells her to watch her back since the First Order doesnt like individuality and all they want is power.

Tam says she has everything she needs and has no reason to leave, that the First Order is helping her achieve everything she always wanted. Venisa asks what that is; Tam has no answer.

She calls her Tamara revealing that she does know who she is and reveals her name, Venisa Doza. As Tam realizes the truth, Venisas droid Torch, who we thought was deactivated, zaps Tam unconscious. Turns out Torch was just in sleep mode and that this was part of the plan we spoke of earlier.

On Colossus, Torra sneaks into the hangar but is caught by Kaz. He knows shes going to find her mother and he offers to help. She explains to him that its more than just rescuing her, its her birthday and she misses her terribly, the one day a year when she gets to see her.

So, part of Venisas plan includes using Tam as a hostage. She also wants Tam to come with her, but she is still resistant. Just then they are caught by Jace, who has a blaster pointed at them. Venisa uses Tam as a human shield.
Jace cant pull the trigger and they have a philosophical debate while Torch closes and seals the door between them. The alarm sounds.

As they make their way to the hangar, Tam tells her that if she cared about Torra at all, she would give up. This comment pisses off Torch who threatens to zap Tam again. Awesome.

Venisa explains that leaving behind her daughter wasnt easy, but ultimately, she did it for her, for a peaceful galaxy.
They make it to the hangar and devise a plan, something they did on Terex that involves stealing a TIE Fighter and planting explosives around the hangar.

As Torch puts the plan into action, more and more Troopers head for the hangar including Agent Tierny. During this time, Venisa continues to work on Tam, trying to get her to see the light, but Tam is resilient, bending very little. She does tell Venisa to get out of there before its too late, unwilling to try and stop her. Venisa frees Tam of her bindings and stuns her for good measure.

Tierny tells the Troopers the explosions are a diversion and to stop the TIE that is taking off. This allows Venisa to jump in her X-Wing as Torch flies the TIE, drawing the fire away. Tam wakes up and yells for them to stop shooting, something Tierny witnesses.

Under fire, the TIE eventually explodes just outside as Torch ejects, triggering the final detonators in the hangar, allowing Venisa to take off in her X-Wing unchallenged. She picks up Torch in space and they take off.

Agent Tierny interrogates Tam in the hangar, but Tam reveals nothing, covering for Venisa. Tierny tells her the First Order has eyes everywhere and sends Tam to security for a debriefing, expecting her full corporation.

Back at the station and having never left, the group plans a surprise birthday party for Torra with a Gorg birthday cake, which is a jello-type cake. The Gorg eats his way out and they all have a good laugh.

Heres the reality. If the Republic continues to ignore the threat of the First Order, we need to be ready...Torra to.
Shes a gifted pilot Emanuel, training her is the best way to protect her. You know how strong willed she is.

Look, the futures uncertain. But well face whatever comes out way, no matter how far apart we are, or how often we see one another.

Whats important is were a family, and nothing can change that.

Torra walks in and they miss her together, sharing a nice father/daughter moment. 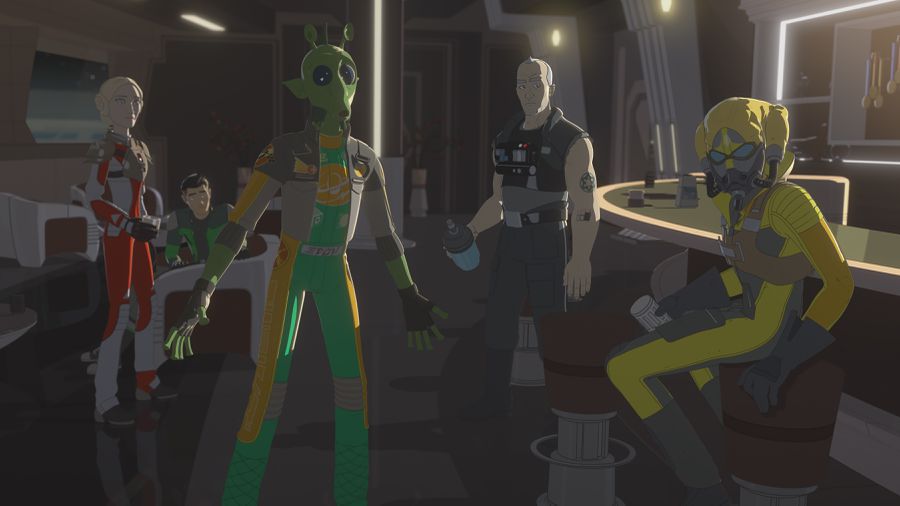 Jennifer Corbett wrote a good one here and Tasia Valenza is wonderful as momma Doza. Great to have her back in the Star Wars universe. Cant wait for more from both these talents.

Obviously, this is a huge amount of backstory for Imanuel and Torra Doza, and its great to finally see it. We suspected all along that it was love of family that drove Doza from the bad guys and toward Castilon, and now we finally have the proof.

A bit of a bummer we didnt get to see them reunite by the end of the episode and now I wonder if it will happen anytime soon? The tone suggests later, perhaps at the end of the season, after the war?

Venisa isnt leaving the Resistance thats for sure so after her mission is complete and the galaxy is peaceful for her daughter, then shell come back, that would be my guess. After shes fulfilled her oath.

Yeah! Tam is back! Im so happy I can end the Tam Watch, it was too long for my liking.

Great to pair her up with Venisa, someone intimate but just far enough outside her circle that shell heed her advice. Whether she takes it or not is another matter, but you can see by Tams actions at the end, not turning her over, shes on her way back to the light.

But Agent Tierny isnt a quitter and is usually one step ahead so if it happens, it wont be without a fight. And the line from Tierny about the First Order having spies everywhere, something tells me they have a plant on Colossus. Well see.
Great stuff from the animation department in this episode and big shootout to our new droid, Torch!

Next week weve got The Voxx Vortexx Blue 5000

Hype takes the Aces to race at Vrankis Casino, run by Vranki the Blue (John DiMaggio).

Obviously, they dont have the pleasure of recreational activities so this race must be a means to an end. Either they desperately need credits and Hype convinces them he can win, or, its a quid pro quo of sorts, this for that.

Well see but its crazy were getting new characters almost every episode this season but continue to ignore most of the folks on Colossus. Im confident theres a method to the madness.