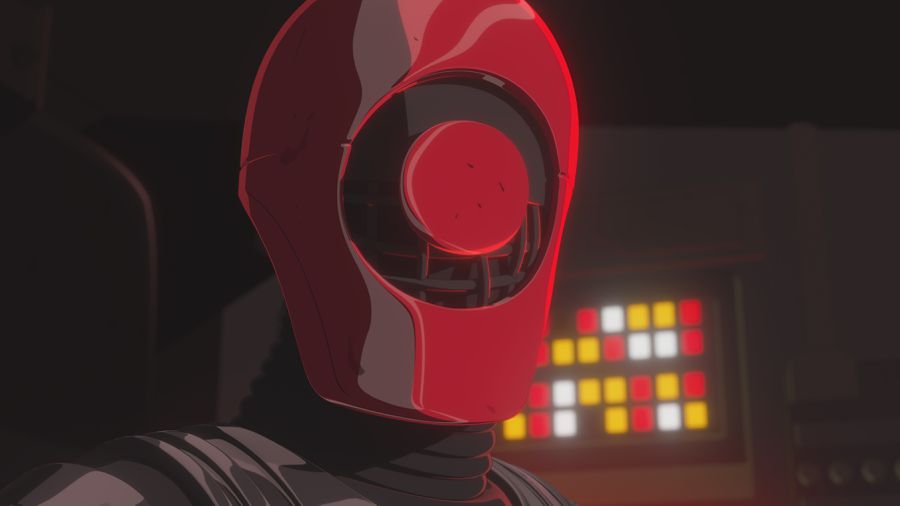 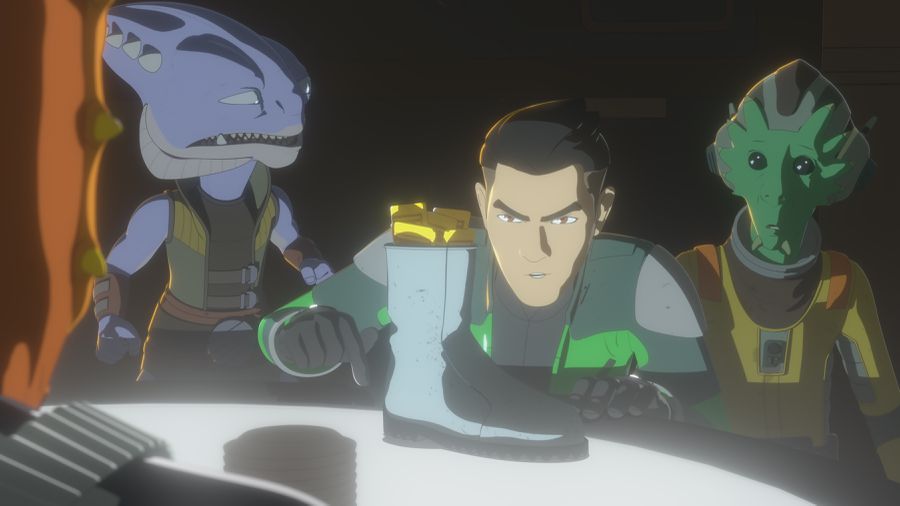 Things seem more relaxed than ever as the Colossus makes its way towards just about the thickest asteroid field youve ever seen. In Aunt Zs, Kaz and the pirates are gambling (I thought they were low on credits?) and generally having a good time.

Theyre playing some form of craps and Kaz is on a winning streak, mostly at the expense of Leoz. The pirate has had enough of Kaz taking his money, so he puts a curse on Kaz in anger.

Neeku, who believes in those sorts of things (isn't he an engineer?), is frightened for Kaz, who is much more skeptical. As they make their way around the station, strange occurrences and coincidences begin to happen, lending some weight the curse theory. Kaz appears nervous but is still denying that there's such a thing as "curse's"

We catch up with Mika Gray who has set up a fortune teller type business on the station, charging 50 credits per reading. She overhears Kaz and Neeku talking about the curse and has a strange look on her face.

Neeku and Kaz are called to the tower where Yeager is asking the Aces to head out ahead of them and scout the asteroid field. They have a second problem as the asteroid field also happens to be Guavian Death Gang territory. So, not only do they have to avoid smashing into any large asteroids, but arousing suspicion as well.

Soon into their mission, Kaz is spotted by a Guavian scout as the unexplained troubles keep happening. He loses the scout in the field and is starting to acknowledge that while it may not be a curse per se, something strange is going on.

Back on the station, Neeku convinces Kaz to ask Leoz to reverse the curse. Leoz pretends to go along with it, covering Kazs face with spit in the process, but ultimately gives him a double curse. Kaz leaves with everyone laughing at him.

Neeku convinces Kaz to go see Mika who he thinks has magic powers. She tells him a curse is only as powerful as how much belief you put into it. She presents to him a talisman, a lucky charm, something that can ward off evil energy. If Kaz believes it will protect him from a curse, then it will, thats the premise. 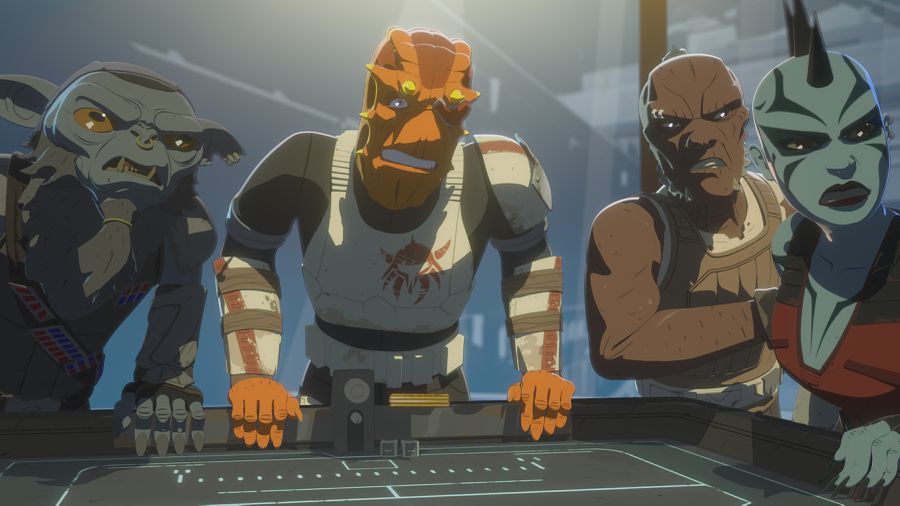 Just then, the station comes under attack from the Guavian who spotted Kaz earlier, only this time hes not alone. They are asking for one million credits in order to pass through the territory or surrender the Colossus. If they dont pay up, they will take the station by force and turn them over to the First Order.

They cant jump to hyperspace until they are clear of the asteroid field, so the Aces are deployed to buy them some time. Kaz, armed with talisman, is feeling confident again and free of the curse.

Hes about to fire on some Guavians when his canons malfunction, he panics when he realizes hes left his talisman on the station. Taking Mikas advice, he talks himself into feeling not cursed and starts to take out Guavians. So, after incurring zero losses again somehow, the Colossus manages to break free of the asteroid field and take off into hyperspace.

Back in the hangar, Neeku and Kaz surmise that hes no longer cursed go to see Leoz. He gives him the talisman, only telling him after its a gift from Mika Gray and that it is cursed as well. Leoz freaks out and throws it away.

As Kaz is approaching Mikas tent, we seen Opeepit leaving and Mika with credits in her hand. So, our maintenance friend got his fortune told by the looks of things. Kaz tells her hes free of the curse and that her advice helped.

As hes walking away, Mika comments about the superstitious nature of pilots while the power flickers, implying theres more going on. 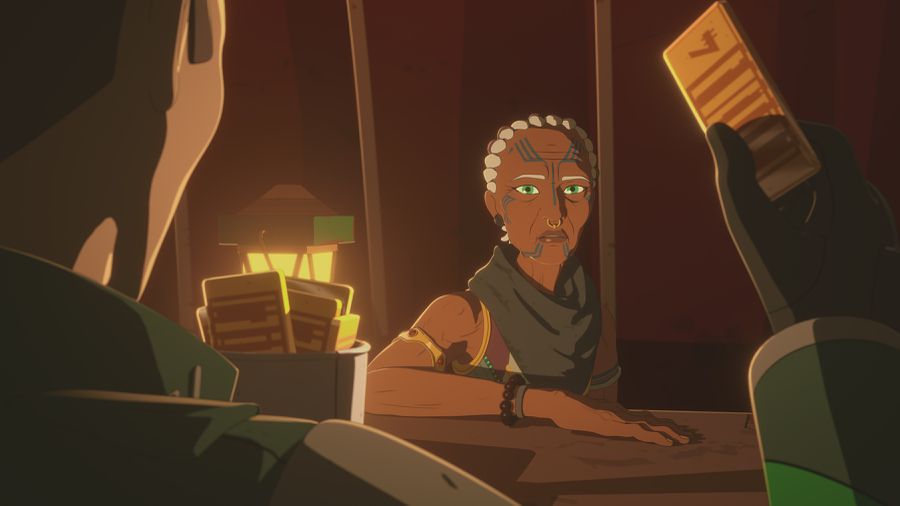 I have mostly the same issue this week as I did last. In a short two season series, theres simply no room for episodes where next to nothing significant happens.

The Mandalorian is experiencing a bit of this right now, being accused of filler episodes, but this my friends, is the real deal when it comes to filler episodes.

The overall plot isnt served in any meaningful way and important new characters are used as props in foolish fashion. This curse plot is nonsensical and making Mika look like a charlatan, even a huckster, is disappointing.

Even the Guavians were wasted, providing next to no threat level, heck, the asteroids were more dangerous. And all we really learned was that Neeku, Kaz, and many others are superstitious, not a real shocker since most pilots are.

Heres hoping the Guavians play spoiler and inform the First Order about their skirmish, and that helps them locate the Colossus.

Next week weve got Station to Station

Kaz and Neeku sneak onto a First Order refueling station in order to take an important piece of tech. Plans go awry when they run into Tam and General Hux.

Okay, this is more like it. Not only do we get more Tam, something Ive been desperate for, but General Hux as well!

Dont know what this tech is, but its obviously vitally important if its worth sneaking onto a First Order refuelling station. I very much look forward to Kaz, Neeku, and Tam running in to each other after so long. Especially Neeku, who was an ardent defender of Tam and never stopped believing in her.

Will Tam help them get away? How long can she keep this up for? Perhaps well get our first real indication of which way things are going to go for Tamara.