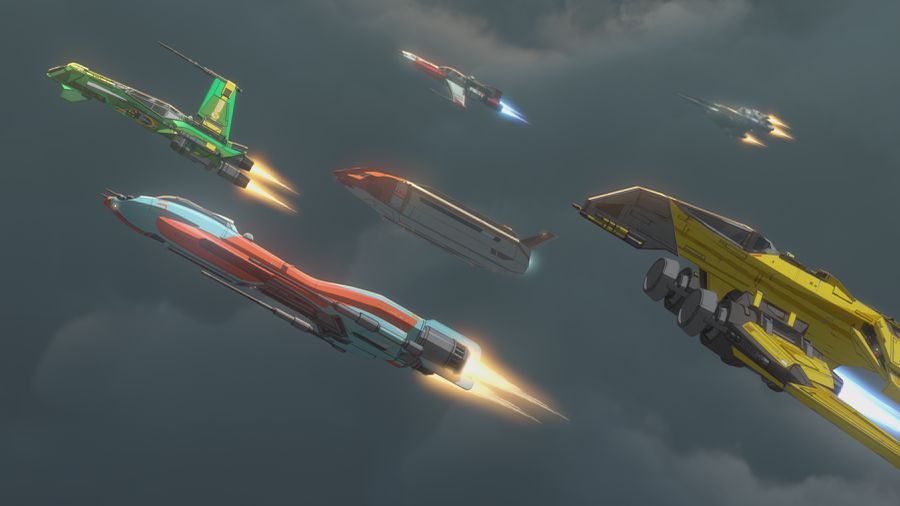 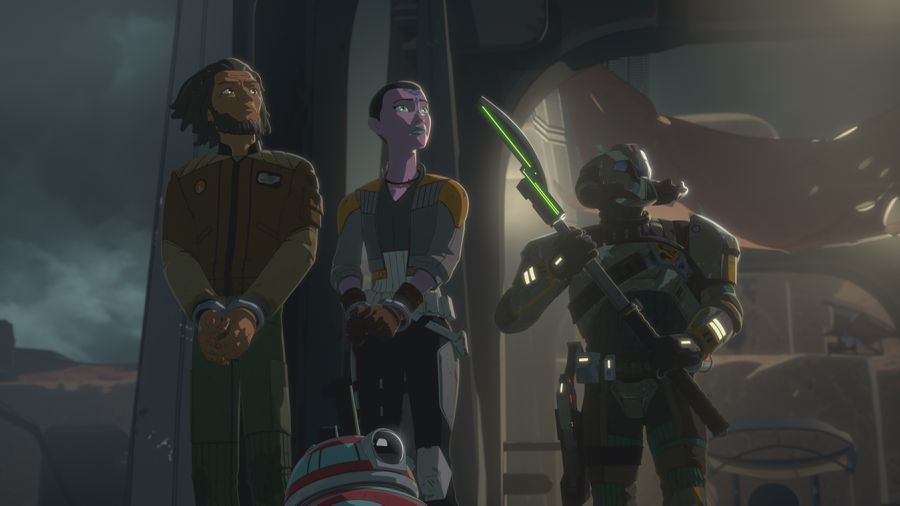 Okay, when we left off last week, our friends were in trouble both above Varkana and on the ground. The First Order showed up and sent a squad to the surface to rendezvous with bounty hunter Ax Tagrin, who has Yeager, Synara, and CB-23 captive.

Kaz and fellow Resistance spy Norath Kev were able to get away and are hiding out in the nearby spaceport. With the Colossus exposed and Commander Pyre headed for the surface, how would everyone manage to make it out alive? Lets find out!

Ax turns over his prisoners to Commander Pyre and Agent Tierny who are a little peeved, they were promised Resistance spies. Ax promises to deliver Kaz and Norath only if they hold up their end of the bargain, meaning lots of credits.

Off-planet, Doza has moved the Colossus to a nearby gas cloud that has a lot of electrical interference, hiding their presence. He radios Kaz and tells him if they are spotted by the First Order hell be forced to jump to hyperspace, leaving them behind on the planet. Kaz understands and assures Doza hell make back in time with the rest of the crew.

With Stormtroopers everywhere now, Kaz comes up with an idea. He and Norath knock out a couple of troopers and steal their armour which allows them to move around with ease.

Meanwhile, Pyre is attempting to extract intel from a defenseless CB-23 and Tierny is using electrical shocks to interrogate Synara and Yeager, who are strapped to some tables. 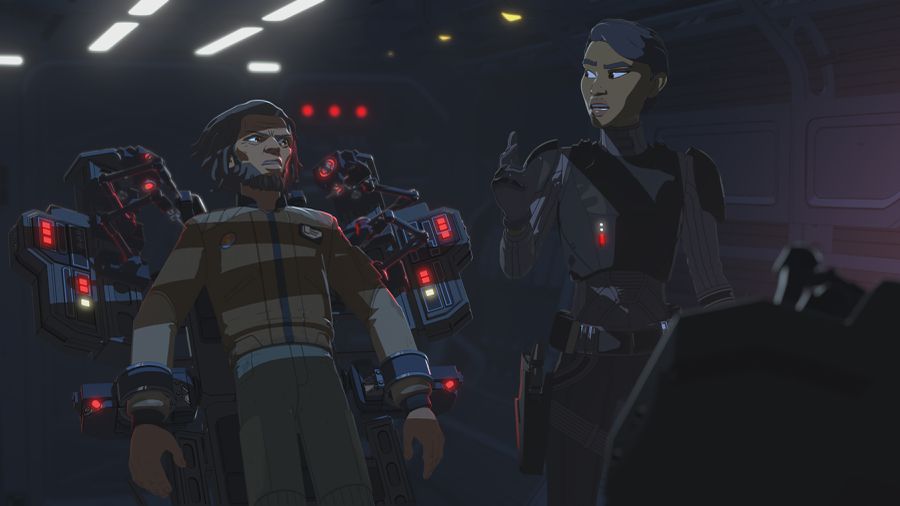 Tierny is getting frustrated with Yeager, who really has no information about the Resistance. She mentions Tam, trying to use her as leverage, but Yeager is too smart for that, telling her that her days are numbered. Tierny gets called away and Synara and Yeager try to figure a way out of their predicament.

As Kaz and Norath are sneaking around, Ax overhears their conversation, discussing their plan of attack which reveals the location of their shuttle. It doesnt take him long to find it and breaks in accordingly. He uses the shuttle comms to send a fake transmission to the Colossus, pinpointing their position, which he immediately reports to Commander Pyre.

Pyre relays the coordinates to a waiting Lieutenant Galek who moves the Star Destroyer into attack position. Before they can engage the tractor beam and the canons, the Colossus takes off into hyperspace, leaving Kaz and the rest behind.

Speaking of Kaz, him and Norath make it to the hangar where they think Yeager and Synara are. They run into Pyre, who they stun quickly and hide his body.

Remember CB? Well, shes been getting roughed up horribly and they plan on destroying her once theyve gotten every bit of intel from her banks. But shes smarter than they are, and when given the opportunity, stuns the guard and manages to kill the power.

Tierny who is nearby, goes to investigate and is knocked unconscious by CB who uses her body as a wrecking ball, swinging into Tierny. At the same time, Kaz and Norath have found Yeager and Synara and get them unstrapped. CB joins them and they all make their way to the shuttle, radioing Doza along the way, who of course, isnt there to respond.

They arrive to find Ax Tagrin waiting for them, and a fight breaks out, forcing them off the shuttle. CB, who managed to sneak on board, flies the shuttle into Ax and fires the thrusters at him, knocking him out.

Kaz and rest board the shuttle and they take off as a now awake Pyre and some troopers show up, firing at them. He radios Galek, ordering her to launch some TIEs and attack the shuttle, she does.

The shuttle is in trouble, taking damage, and not going to make it, but they are saved by Torra and the Aces! Turns out while the Colossus may have jumped, the Aces launched and have been hiding, waiting to strike.

They are escorting the shuttle deeper into space but still have the Destroyer in their path, who has launched another squad of TIE Fighters. As the two squads are headed straight for each other, the Colossus appears out of nowhere and comes out of hyperspace directly in between the two sides.

The TIEs crash into the broad side of the station, which is also shielding the Aces, taking blows from the Destroyer. The Aces make it to their hangars and the Colossus blasts off into hyperspace, safe once again.

In the hangar, they are all together, happy to be alive. Norath thanks Doza for the rescue, for helping the Resistance, to which he smarmily responds, I didnt do it for the Resistance, I did it for my people.

Norath thanks Kaz and asks him to come with him, to join the Resistance. Kaz considers it for a moment but then tells Norath hes not ready to leave, yet, and they all go to Aunt Zs for a drink. 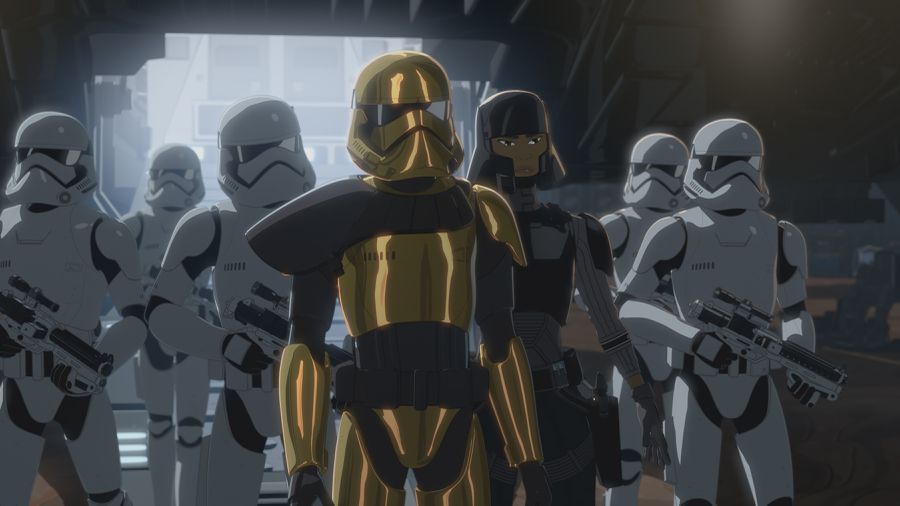 So, this is the second half of the bounty hunter special which of course started last week, and it was a good conclusion overall. I think I liked part one The Missing Agent better than this episode but put them together and youve got a really fun 45-minutes of TV.

Dozas grumpiness remains and his curt response to Noraths praise at the end likely is setting up something down the road. Dozas attitude towards the Resistance is understandable, its taken his wife, Torras mother, away from him. And having Kaz around has been a considerable pain in the butt.

Norath asking Kaz to join him was a nice touch and Kazs answer was a tad revealing as well. Hes not quite ready to leave his Colossus family and join the Resistance, but will he ever? We know now from The Rise of Skywalker what ultimately happens in the war, but will Kaz get a piece of that action before the seasons end?

I very much like Yeagers comments about Tam, clearly, hes not given up on her and still beams with pride in her abilities. Thats the reunion we all want to see and Im very much looking forward to it.

Obviously, they must get Norath back to the Resistance so looks like hes on the station for the time being. And what about Ax Tagrin?

Kragan buys a secret weapon to capture the Colossus and take over. When Synara discovers this plan, she tries to warn Kaz and crew, but it may be too late.

Okay, this has been in the cards since day one and if you go back and re-read any reviews, Kragans face turn has been seen coming a mile away. It looks like weve come to that point and I think I know what secret weapon the description is referring to. I wont say it here but if you read The Rise of Skywalker Visual Dictionary, you might find what youre looking for. Maybe.

Nice to see Synara choosing the station over the pirates and hopefully this will finally place her on the right side.