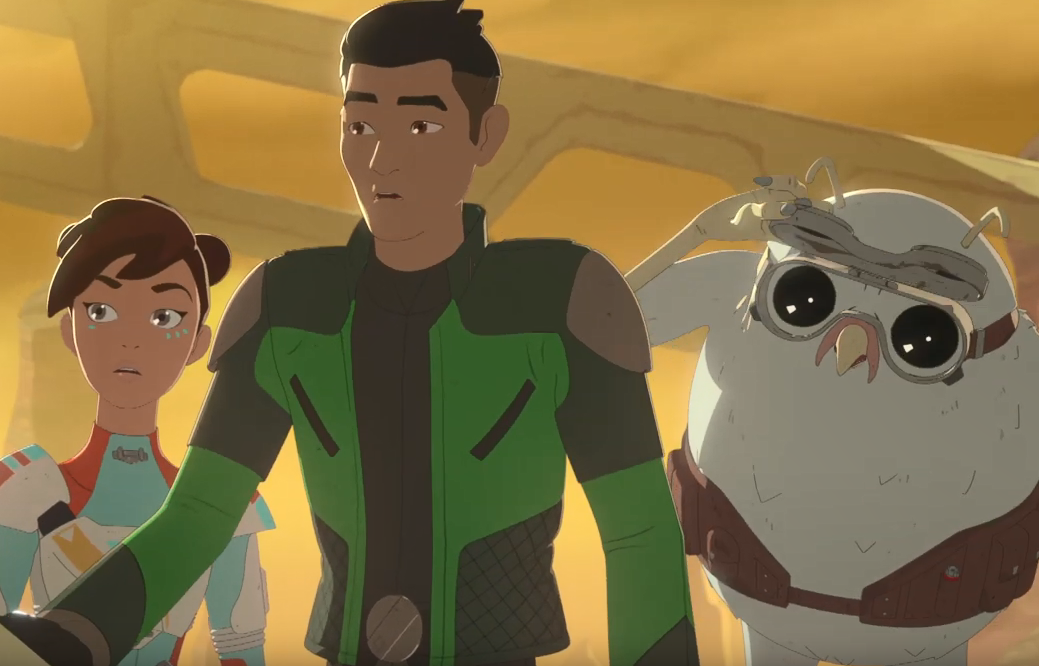 Star Wars Resistance - "From Beneath" Review 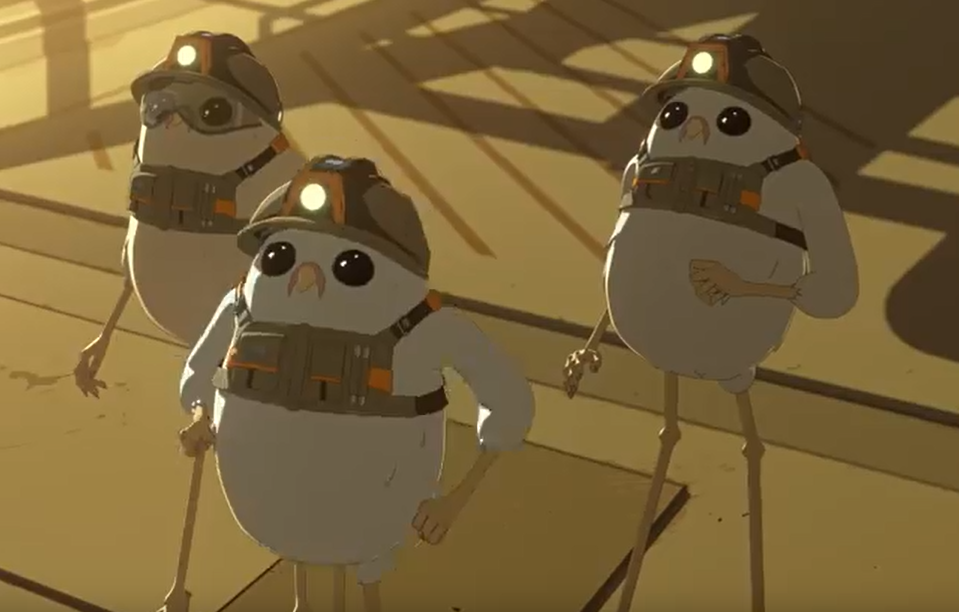 Okay, last week was, for me, one of the best episodes this show has produced in its short existence, so how would this week fare?

Well, we get off to a pretty good start with Kaz, Torra, Orka, Flix, and CB leaving the Colossus, heading towards Drahgor III. Just about out of fuel, they are headed to a fuelling refinery on the planet which is owned by Flixs uncle and cousins.

Its a bumpy ride as they encounter massive electrical storms in the planets atmosphere, something that seems to be getting worse according to Flix. But thats not what has him stressed out, hes experiencing some anxiety and fear over the way things were left years ago with his family. Orka is trying to reassure him but its not working.

Its a bit of a roller coaster ride but they manage to make it to a landing pad.

Free, isnt in the Gozzo vocabulary

Once out of the ship they encounter Filxs cousins, Fleck (John Ennis), Flanx (Paul F. Tompkins), Flobb and Fleez (both Pete Holmes). Flix doesnt get a warm welcome from his cousin Flex who chastises him for leaving them in the first place, thinking hes better then the rest of his flock.

Flix tells them he needs fuel which hes entitled to as a member of the flock, but They accuse him of coming back only for the money, after hearing about how theyve struck it rich with deep-core drilling.

Flix gets angry, telling them the dangers of deep-core drilling and almost on cue we hear the roar of what sounds like a dragon, or so Flix thinks so. But they assure them thats just the sound of their drill breaking down.

Kaz makes them a deal, if he can fix their drill, then they must give them fuel in exchange. They all agree and head down on the mine-shaft elevator.

While en route, Flix tells them all the legend of a race of majestic dragons which lives deep underground. The old Gozzo flocks warned them that if they drilled too deep, they would unleash the beasts below! Think Mines of Moria and youve got the right idea.

Again, almost of cue, Kaz and Torra see something very big in the fog and they stop the elevator. We see a blurry image of something that knocks some rocks loose, hitting the elevator. The elevator goes into a free fall and they all grab on for dear life, screaming. Flix hits the emergency brake and they stop.

Torra tells everyone to grab onto the track but only her and Orka make it as the brake gives out. The rest fall in the elevator but at the last second jump off as the elevator crashes not the ground deep below.

Torra and Orka decide to keep climbing up the track to get to the shuttle, while the rest will stay below and fix the drill as promised. Flanx still doesnt believe in the dragon, not having seen it earlier.

When they jumped off the elevator, Kaz got separated from CB, Flix and Flanx so hes taking the long way to the drill. Kaz literally comes face to face with the dragon at last, but the giant beast doesnt see him, so it appears the dragons vision isnt that great for still objects. 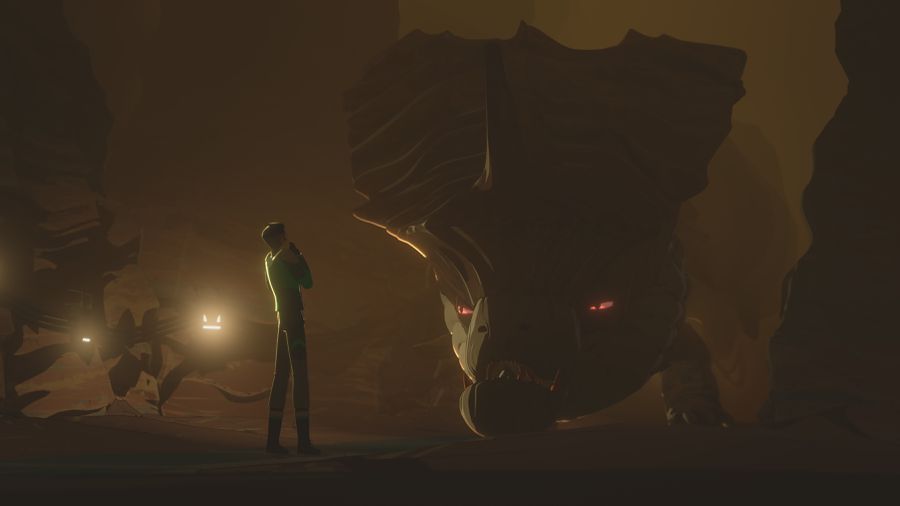 Flix and Flanx and arguing about the existence of the dragon by the drill when Kaz comes running toward them, screaming about having seen the dragon. Flanx still doesnt believe and laughs at him. Kaz is determined to fix the drill and get out of there.

We cut to Orka and Torra who are still making their way up the very long track. Orka is struggling and wants to quit so Torra has to give him a bit of a pep talk. She appeals to his affection for Flix, which seems to work as he says, I love the guy Ugh, heart growing!

Back at the drill, they get it working but then the dragon shows up and Flanx finally sees the beast for the first time. They all run off in different directions as the dragon goes after them. CB-23 finds a blaster for Kaz to shoot the beast with as it gets a hold of one of Flanxs legs. CB then shines a bright light in the dragons eye which seems to startle the beast and it takes off down a tunnel. Seriously, without CB-23, everyone would have been dead ages ago.

We cut to Torra and Orka who have finally made it to the surface, but the remaining cousins want answers as to where Flanx and the others are. As they confer with one another, Orka looses his cool and yells at Flixs cousins, saying theyre taking the shuttle and that they are going to help him with the fuel. They respect Orkas sudden demeaner and take-charge attitude and all agree Flix has found himself a good partner!

Flix, Kaz and CB head deeper into the tunnel to find Flex and the dragon, and its not too long before they do just that. Kaz blasts the dragon and that allows Flex to get out of his mouth and they all take off running.

Back in the main drilling area, it turns out there are a family of dragons, three to be exact. They turn on the large lights stationed around the work area which only temporarily does the trick. But just before they get eaten, Torra and Orka show up with the shuttle and scare them off with more focused lights.

They use the drill to collapse the tunnel, sealing in the dragons once and for good. Flanx apologizes to Flix for not believing him and they hug.

Back up top, Flanx informs the others that the dragons are real, and they will no longer be deep-core drilling. They load up the shuttle with as much fuel as they can carry, and they head back to the station, having healed old family wounds. 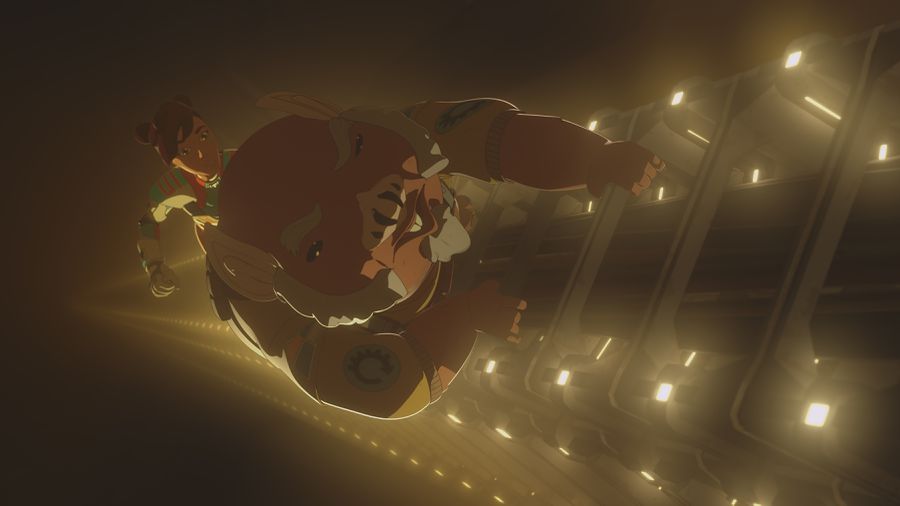 Whats with Torra and Kaz getting all the large beast duties lately? Anyways, theyre a good team and work well together so it makes sense.

This episode felt like a bit of a lost opportunity for me, with regards to Flixs family. I wouldve welcomed a little less dragon action, and a little more Orka/Gozzo parlaying but it is what it is. Still an enjoyable episode though and what little we did get of Flixs family was great.

Bobby Moynihan and Jim Rash are always fun to listen to whenever Orka and Flix are in an episode but finding things for them to do in the future will be probably tricky. We havent seen the Office of Acquisitions in a long time, so perhaps its time for a revisit?

John Ennis, Paul F. Tompkins, and Pete Holmes were great as the Gozzo cousins and although its unlikely, I would very much like to see them again.

The MVPs of this series continues to be CB-23, and the animation department. This show just looks so damned good all the time and I hope after this season ends; they use this style of cell-shading in the future.

And finally, this marks the third episode in a row where we havent seen Tam, they need to remedy that. 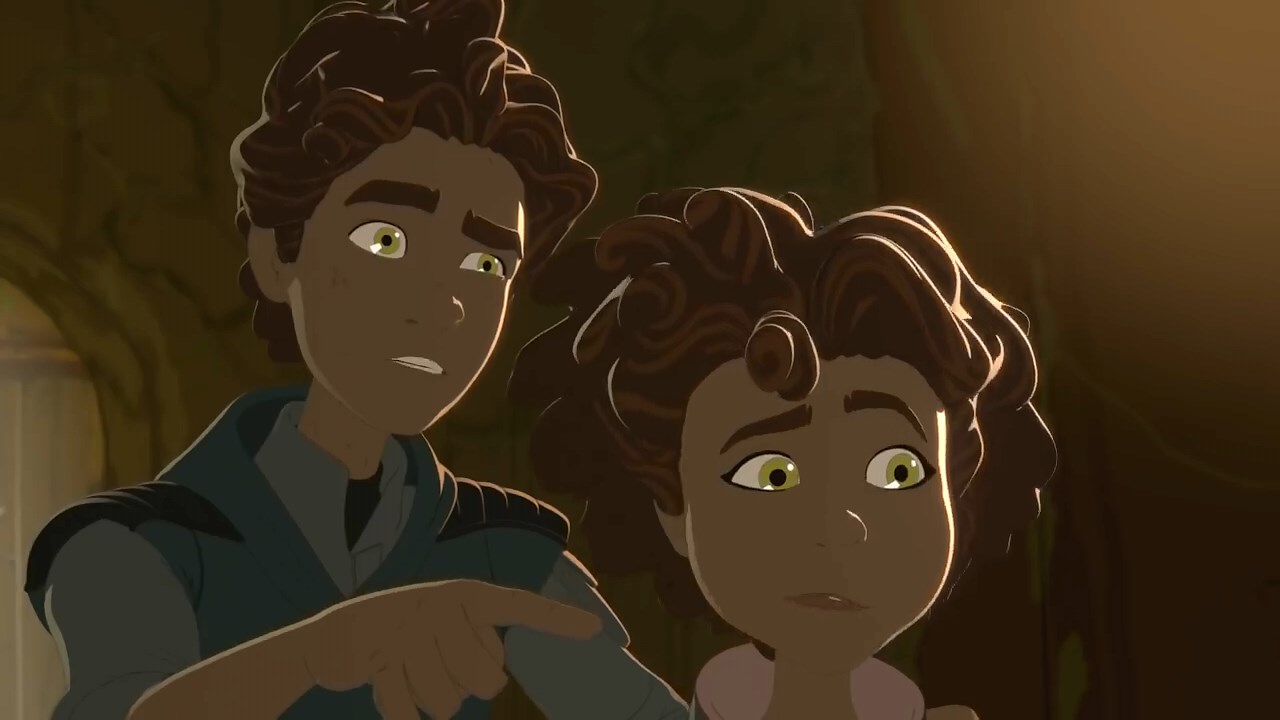 As for next week, weve got The Relic Raiders

When Kaz and the team arrive on a mysterious planet to buy supplies, they find the outpost has been abandoned and a secret Sith Temple has been raised.

If youve seen the trailer, then you know the bits where we se Kel and Eila (Tehar kids) are from this episode. Weve known all along they have a strange connection to the Force, or at least their home planet did, so maybe well finally get some answers. Plus, it seems the strange symbol they wear around their necks will finally reveal itself.

Either way, it does look like this might be our first opportunity this season to tap into some Kylo Ren action, at least a mentioning anyways.