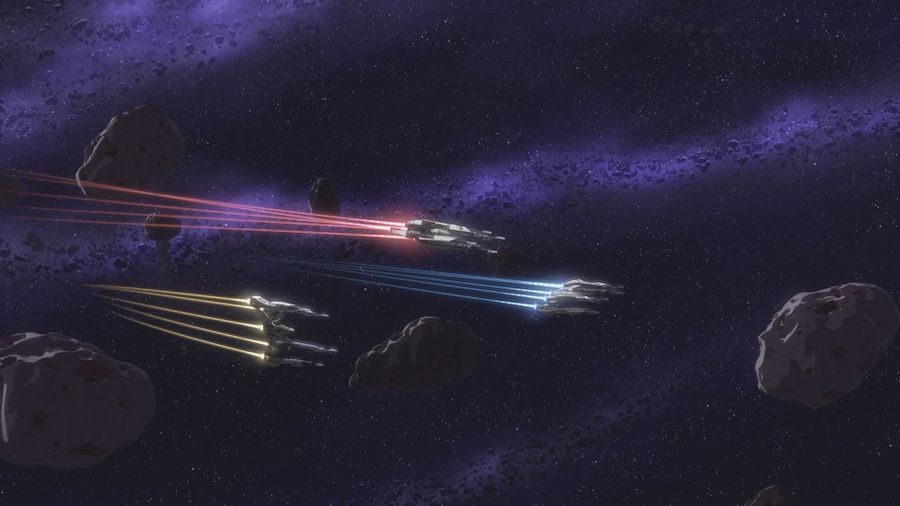 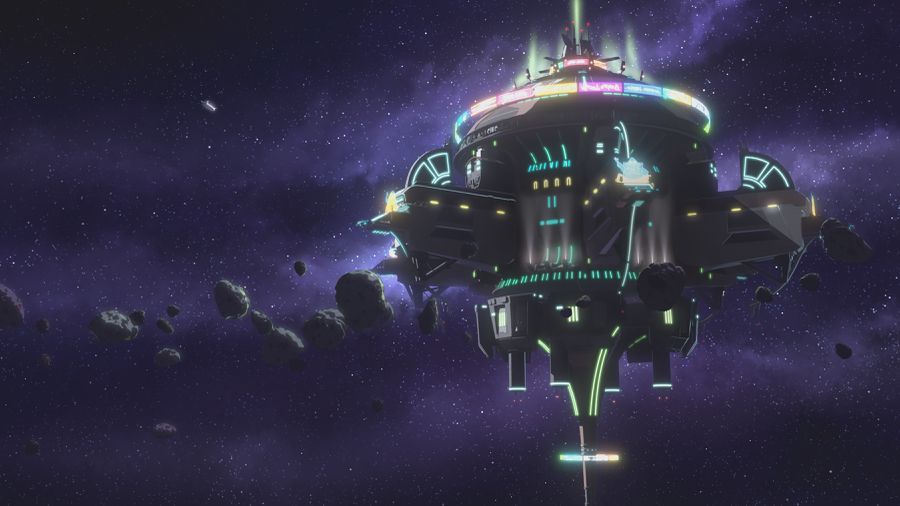 Racers need to racethat pretty much sums up this weeks new episode of Star Wars Resistance, The Voxx Vortex 5000

We start off with the Aces in the lounge who are young and restless. Theres not much to do when youre hiding in the middle of nowhere so some of them have even resorted to wrestling with each other.

Its worth remembering that these pilots didnt sign up for any war. They were full-time racers who were occasionally asked to defend the Colossus when it was firmly anchored on Castilon. The only action they saw was the occasional pirate attack, which they easily thwarted most of the time. The First Order is a different animal entirely.

Having left the First Order behind for the moment, they have encountered a new enemy, boredom. Their second problem is that theyre broke, having nearly run out of credits. Turns out leaving Castilon, while necessary, was extremely bad for business.

So, Hype thinks he can kill two birds with one stone by visiting a nearby Casino which hosts high stakes racing events. They get to scratch their racing itch and make a quick buck at the same time. Old-man Doza doesnt like the idea at first, but Hype convinces him anyways, and off they go to the Voxx Cluster.

Hype receives a warm welcome from Vranki who was his very first sponsor back in the day. They seem to have done well by each other before Hype left for greener pastures. Whats concerning is that the once bustling casino is now mostly deserted. Vranki blames the lack of patronage on the war, with most people choosing to go to Canto Bight instead.

Doza proposes a race, telling Vranki they were hoping to make a little money while passing through the system. Vranki wants Hype to come back and makes a deal that if he loses, he has to stay and race for Vranki again, full-time. Doza doesnt like it, but Hype assures him he knows this course better than anybody, he cant lose.

Hypes overconfidence is warranted as hes a pretty good racer, but Vranki is crafty and stacks the deck (sorry) in his favor. Turns out, Hype isnt racing a person, hes racing a droid, and this droid doesnt make decisions based on fear of asteroids. Plus, Vranki has programmed the droid ships to cheat which causes Hype to lose the race.

Hype and Doza are furious and refuse to honor the bet, but Vrankis security, a pair of Kowakian Ape Lizards, are blocking the way. These are the same Kowakians we saw back in Season One, in an episode called Signal from Sector Six

Meanwhile, Neeku, with nothing else to do, notices a bank of stand-up holo-games, his favorite, and begins to play. It isnt long before they realize the games share a similar pattern with the droid racers and the course itself. They think the holo-games and droids are connected somehow and must share a common algorithm or brain core And if this is the case then the system could be hacked to gain an advantage. 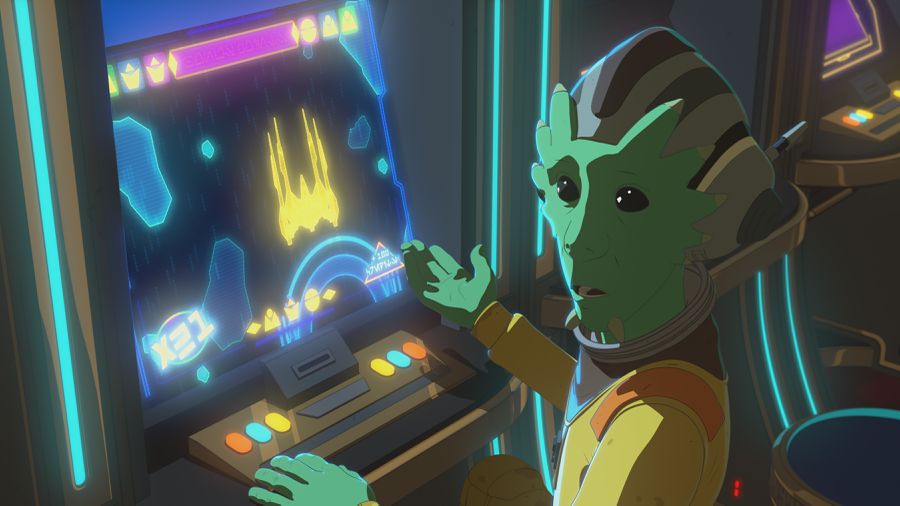 They present the idea to Doza, and with Neekus help are more confident. Doza bets the farm, all the Aces and their ships for the return of Hype.

Each Ace successively loses his or her race however as Vranki breaks the rules each time, using mines one moment, and asteroid-mounted canons the next. Neeku isnt able to predict these obstacles quick enough.

So, what started out with just Hype, Doza now has lost his entire Ace lineup, minus Torra and Kaz.

With one last shot, Torra and Kaz get the idea to do a relay race, feeling their combined talents, plus the help of Neeku, should be enough. So, Doza wagers every pilot, ship, and even the Colossus against $500,000 in credits and the safe return of everything hes lost. This is too much for Vranki to turn down and the race begins!

Torra holds her own but falls behind when Vranki has canons fire on her as soon as she takes the lead. This causes Kaz to start from behind after the baton is passed at the halfway point.

Meanwhile, Neeku is fighting with two Kowakian Monkey Lizards, who spotted him earlier trying to affect the race. Its because of this he wasnt able to warn Torra about the canons or any other obstacles in her way.

So, Kaz has no choice but to outmaneuver and outfly the droid ship until Neeku can shake the monkeys loose. Kaz spots a shortcut, which he takes, but since Vrankis done nothing but cheat the entire time, theres not much he can say about it.

And just when the droid ship and Vranki are about to turn the tables on Kaz, Neeku breaks free of the monkeys and is able to shut them down. Kaz cruises to finish line with ease.

Vranki begrudgingly pays up and they leave with all their pilots, their ships, the Colossus, and $500,000 in credits. Its more than theyd hoped for, and it nearly cost them everything, but in the end, a worthwhile stop. 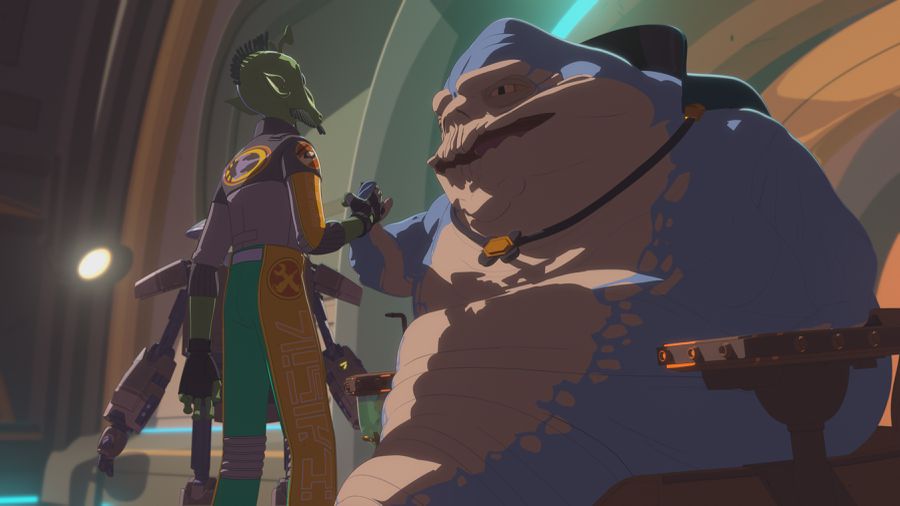 Not sure how I feel about this one, but the current run of great episodes has definitely come to an end. This friends, is whats called a filler episode.

Resistance does many things well, but one thing it doesnt is carry emotional weight from week to week, unless the episodes are specifically connected. So the emotional high of last week has been snuffed out.

This is a serial series that doesnt really follow the rules of a serial series. The shows running plot, hiding from the First Order with no real destination as we head towards The Rise of Skywalker, doesnt always unfold in meaningful ways. And occasionally, which is the case with this episode, not at all.

The case of the week format only survives if the main story arc, mentioned above, reveals itself little by little. From where Im sitting, this episode didnt accomplish that. Maybe I missed something but recycling the jacked up Kowakian Ape Lizards from Season One just doesnt do it.

So, ultimately, for me this is a throwaway episode, which is a shame since the season, and the series, is nearly complete. This is an episode that would be a mid-season blip in a show that is in the throes of a five or six season marathon, not a shortened two season race.

One issue continues to be their management of a bloated cast. Simply put, they need to find a way to get more people involved, or drop them off somewhere safe; we cant just pretend a commodity like Synara isnt there.

As always, the show continues to look and sound great, especially when the Aces are involved. The look and design of the casino and the droid ships were really effective. And I really enjoyed TC-G3 and the work that Grey Griffin put in voicing her; she played great opposite to John DiMaggios Vranki.

Anyways, thats enough of that. Next week weve got Kazs Curse

Its nice to see Mika back already. She made a marvelous debut back in The Relic Raiders and obviously with her returning so quickly, has a larger part to play.

One thing this show has done, time and time again, is introduce a character then wipe them from memory just as fast, so her inclusion next week bodes well for Mikas long-term prospects.

And who is this Leoz character voiced by vet Steve Blum? Is he/she this pirate that curses Kaz? And why is Kaz being cursed at all? He has a way of irritating people so Im sure its tied to that somehow.

Were halfway through the season now so its all downhill from here. As in Season One, I would expect the show to kick into high-gear and go on a good run to finish us out.