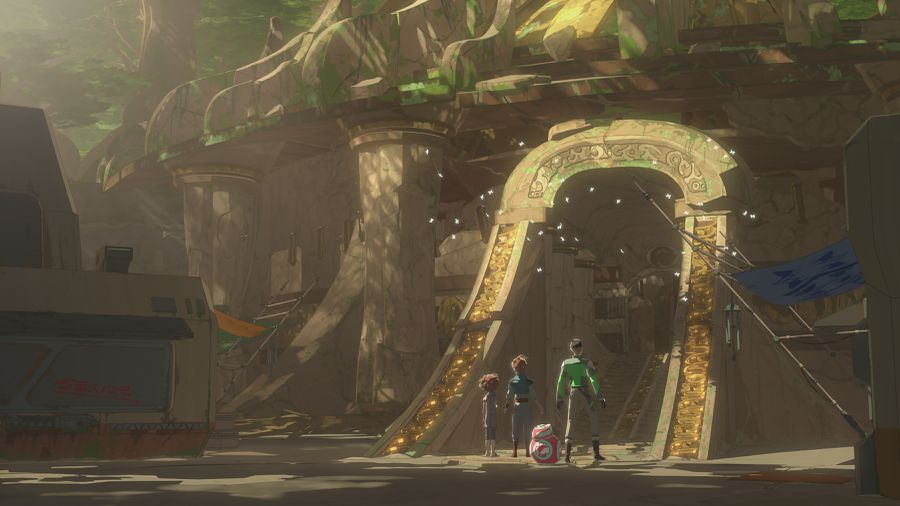 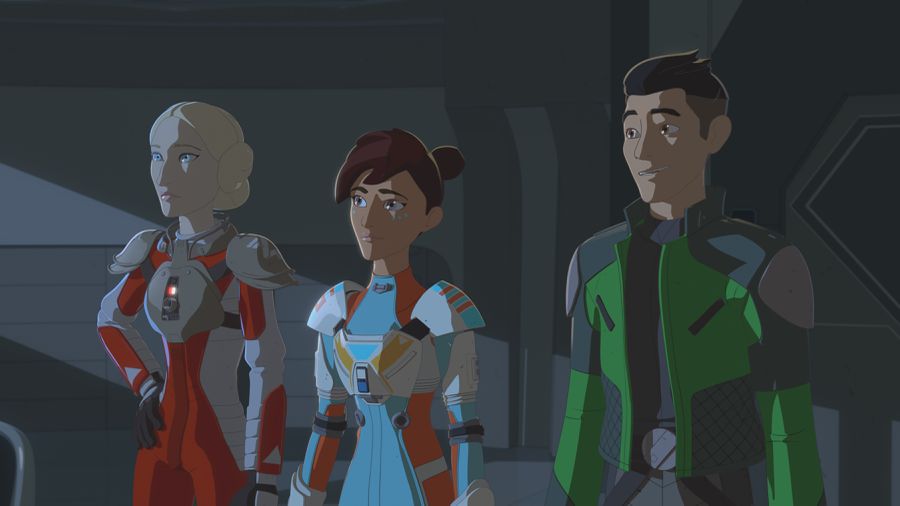 Thanks to Flix, the team was able to get their hands on some hyperfuel last week, something they were in desperate need of. They are still running low on just about everything else however, including credits.

Luckily, they happen to be near a trading outpost on Ashes Ring and Doza gets the urge to go shopping. He sends Torra, Freya, and Kaz to the planet to buy as much as they can with what little money they have.

As Kaz readies the shuttle he is startled by siblings Kel and Eila who ask to tag along on the mission, citing extreme boredom. Kaz doesnt like the idea, but sympathizes with them and lets them stow away.

They arrive at the outpost finding it deserted with no obvious explanation. However, they do find graffiti on the walls that says things like beware get away and evil This is unnerving, but they decide to gather what they can and leave in one hour.

While Torra and Freya go off salvaging, Kaz goes to the shuttle to get Kel and Eila who have promptly taken off. They are keen to explore and wander around, checking out the sights.

Fearing for their safety, and him getting in trouble, Kaz and CB-23 go looking for them. When he does find them eventually, they are standing outside of a giant temple. Before Kaz is able to stop them, they excitedly run in, hes forced to follow.

Once inside, they say it reminds them of their temple back home but dont recognize any of the symbols, which they think could be Jedi in nature.

When Kaz says he doesnt really believe in the Force or the Jedi, Eilas not having any of it saying, Just because you cant see something doesnt mean its not real Kaz Point taken.

Its easy to forget that Kaz hasnt spent any time at all with the Resistance or General Organa, so his experience with the Force would be practically zero.

At some point, off in the distance, they begin to hear a womans voice coming from a lower part of the temple. They follow the voice through a doorway which leads them down further into the lower levels. The look of the temple changes the further they descend, going from a friendly Jedi like atmosphere to a more sinister Sith-type thing.

The kids pull just ahead of Kaz into a room when he steps on a footswitch causing a door to close, cutting them off from each other. Kaz tells them to stay put while he finds another way around.

With the voice getting louder and seemingly closer, CB picks up a nearby lifeform reading and rolls off. Kaz, thinking the kids are fine, follows, stepping on another footswitch in the process. This time, instead of a door closing, he gets zapped with red electrical energy, leaving him in a drunken state, both dizzy and disorientated.

They enter a room where the womans voice is loud and clear, warning them not to touch anything. At the center of the room is a relic sitting atop an altar of sorts and Kaz, still drunk, ignores her pleas and touches it immediately. It was a trap, as portions of the floor open up, causing him to fall below. In the dark, he yells up to CB to go find Kel and Eila for help. 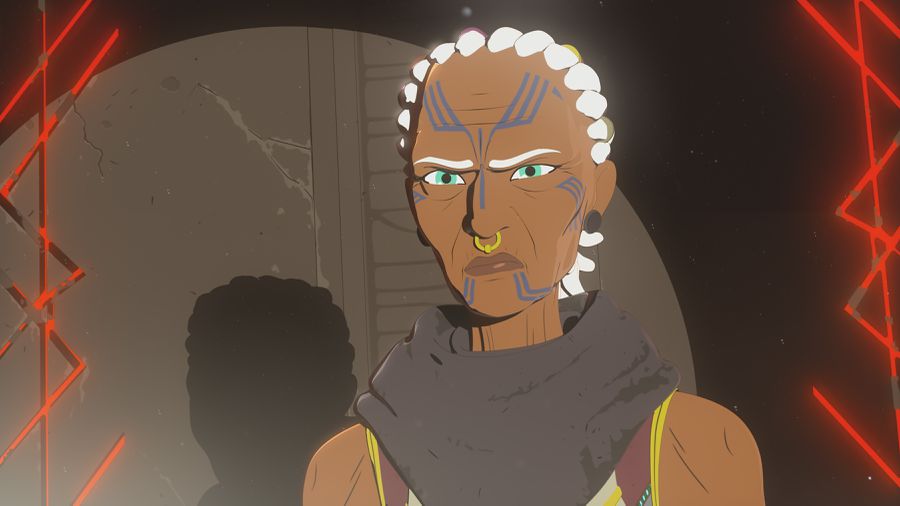 Kaz is in some type of darkened inescapable room and its in here we meet the source of the voice. Shes an older woman with dark skin and blue markings on her face.

The woman is angry at Kaz for the touching the relic, which triggered the trap door. She asks him if he works for the First Order and he explains hes just lost, looking for his crew.

A quick cut to Torra and Freya who are loading supplies onto the shuttle when they get alerted on their radar. There are ships approaching that didnt come from Colossus and Torra is frantically trying to get a hold of Kaz.

Back inside the temple, Kaz is thoroughly confused so the woman explains to him that they are in an ancient Sith Temple. And that sometimes they bury them beneath Jedi Temples in a process called purification of suppression She herself raised the temple to reveal an access way to the Sith temple.

Shes been trapped down there for two days after first raising the temple, which scared off the villagers, who were concerned about evil forces being unleashed.

He offers to help her even though she told him to stay still, but he doesnt listen and activates yet another footswitch. The entire room begins to spin at dangerous speeds and the two of them are thrown aside. The immense pressure is forcing them to the sides of the room, preventing them from moving. Think a Gravitron from an amusement park and youll get the idea.

Up top, CB has found Kel and Eila and they yell down to Kaz. The woman tells the kids to look for Sith hieroglyphics on the walls and to press them at the same time. They do and the device slows to a stop, Kaz and the woman narrowly avoid death.

They climb out and the woman puts the relic in her backpack, saying she can now complete her quest, which is to make sure no one else gets it. Kaz once again fumbles and puts his hand on a symbol, causing the room to start collapsing around them. They make a run for it and exit the temple just in time as it collapses behind them, sealing the entrance to the Sith portion.

Once outside, they see Torra and Freya under guard from some what we learn are Relic Troopers. They are trying to find out who else is with them but Torra and Freya are defiant. The old woman makes a comment about having thought lost the bucketheads on Vargos-9. She explains to Kaz that they arent regular stormtroopers, but First Order Raiders, who hunt down relics for their leader

She decides they should head for her ship but soon discover it has been destroyed by the First Order. So, Kaz comes up with a new plan.

He wants Kel and Eila to distract the troopers while he and creepy old lady rescue Torra and Freya. But when he looks around, he sees that the old woman has disappeared.

They figure if they lay low and keep a low profile they wont be spotted, but then of course, theyre spotted. They are grouped in with Torra and Freya, and Agent Raith (Tom Taylorson), the leader of the Raiders, wants to know what they found inside the Temple.

Just then, the old woman appears high above them holding the relic in her hands. They recognize her and Raith demands she hand over the relic immediately. She mocks them for not being able to find her and that theyre in big trouble should their precious Supreme Leader find out they came back empty handed. I must assume she still means Snoke, based on this point in the timeline.

Raith threatens to harm the children so the woman activates the relic and throws it at them, which emits a massive amount of red energy, electrocuting the First Order raiders. The others were able to avoid the blast by running just inside the Temple.

They emerge after the dust settles and the old woman explains shes being looking for the relic for over two years, and expresses regret that she met Kaz, who essentially ruined everything. Kel asks if the relic was a weapon, she responds

Some kind, yes. A power source from an ancient time. One beyond all of your reckoning.

Because her ship was destroyed, she has no way to get off the planet so Eila suggests they come with them to Colossus. She agrees but uses the opportunity to throw another dig Kazs way, inferring hes extremely incompetent. Torra finally asks the womans name to which she responds, Mika Grey

Eila tells her the Colossus is a safe and wonderful place and leads her away. Freya expresses concern that she could be trouble but Kaz thinks perhaps they can learn something from her.

On the shuttle, the kids apologize to Kaz for causing so much trouble, but the affable Kaz says its fine as long as they dont do it again. Eila approaches Mika and asks her about the Force, who claims to know a bit. She says shes neither a Jedi nor Sith, but explains

The Force doesnt belong to any ONE person. It is something that is inside all of us, we just find it in different ways.

The camera focuses back on Kazs, who has been listening, and seems to be pondering what Mika is saying as they make their way back to the station. 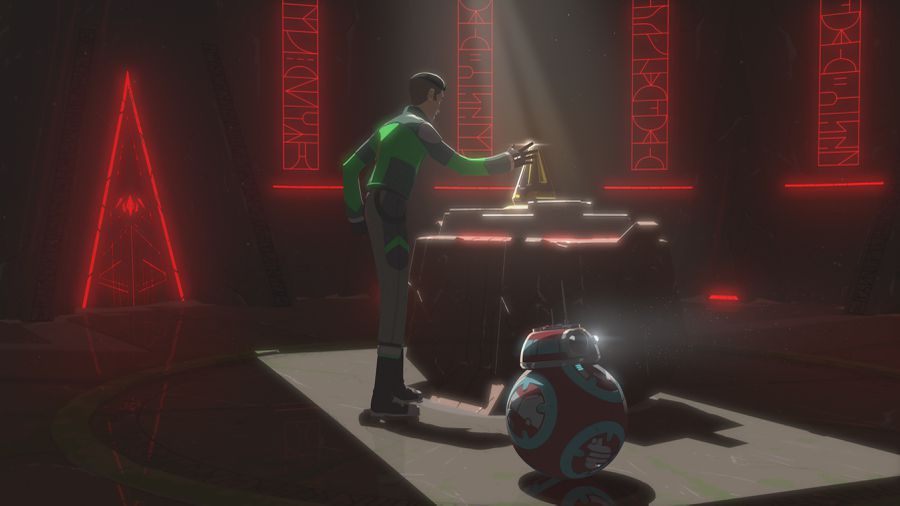 So, weve known since last season that the siblings, Kel and Eila, are attuned to the Force in some way, especially Eila who has demonstrated some latent abilities. And it appears she may be the one who turns Kaz around on the subject. Itll be interesting to see as things get stickier, if Eila is unleashed and taps into something more powerful, in a key or opportune moment.

Mika, voiced by Tudi Roche, is an interesting, sort of sage like presence on the group. I like her grumpy no BS demeanor and it should play well against some of the folks on Colossus. And its incredibly convenient and fortunate for the station that the people they continue to run into have a beef with the First Order. Even Nena, the Nikto engineer, is now an enemy of the First Order so count her as one of the good guys now.

Ultimately means more mouths to feed but as we approach The Rise of Skywalker, theyll need all the help they can get.

Theses First Order Raiders are very cool and hopefully we learn more about their missions, searching the galaxy for relics on behalf of Snoke. Now, was Snoke looking for these relics to use as weapons or just to collect? And will this tie-in to the films at all?

It was nice to see Freya thrown in for good measure, although it feels like a role normally reserved for Synara so, just trying to spread out the work I suppose.

Theyre running into some bad habits here however and this routine with Kaz, especially in the last few episodes, requires some retooling, I think. Equally troubling, the Tam watch continues, and we now have four episodes in a row without her.

A lot of focus was spent showing Kaz fumble his way through yet another mission, and achieving success in spite of him. Mika herself emphasizes this much in her lessons learned lesson.

This episode has been compared to Raiders of the Lost Ark (rightfully so), and that is compounded by the fact that Kaz, like Indiana Jones, plays no big role in determining the outcome.

Kaz isnt as strong and confident as he was at the end of Season One, heres hoping theres a return to form soon for our hero.
Some of these issues look to be resolved in next weeks Rendezvous Point

Doza attempts to meet a Resistance pilot from his past. Meanwhile, the pilot has been captured by the First Order.

So, what does this mean then? Is it going to be a rescue mission or defection that reunites Doza with this pilot? And, is this pilot known to us already or someone new?
Well find out next week!