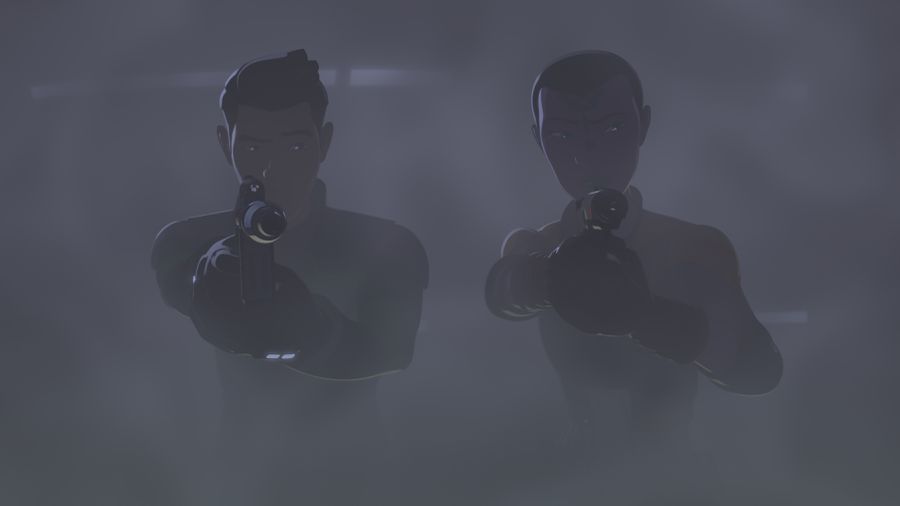 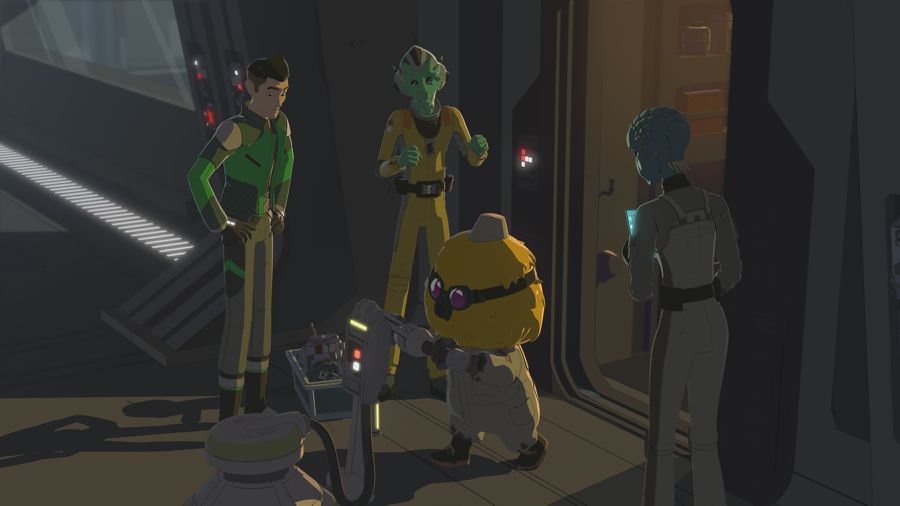 Last week, we spent most of the episode on Celsor 3 dealing with jakoosks, snow, and parkas. This week were back in space as we start off on the bridge where Neeku and Kaz are busy trying repair vital station systems damaged by the First Order. Why theyve waited so long to fix these, well, youre guess is as good as mine.

Theyre making minor progress when a distress call comes in. There is a nearby stranded ship that was apparently attacked by the First Order. They acknowledge its risky but decide to go, so Kaz volunteers to check it out while Neeku stays behind to continue fixing the Colossus. Yeager demands that someone accompany Kaz, someone whos better with a blaster than he is.

So, Kaz and Synara go to check out the stranded ship and while en route Synara gets Kaz to admit that shes a better shot than he is and expresses her concern that this could be a trap.

They find the ship with a lone occupant, a Nitko engineer named Nena (Meghan Malone), and she claims the First Order attacked her home world and she barely made it out alive. She accuses them of being pirates, something she seems wary of. Synaras guard is up and treats Nena with trepidation.

Kaz offers a little quid pro quo, if she accompanies them back to the station to help their overworked engineer fix the station, theyll offer her space and resources on Colossus to repair her own ship. She agrees.

Back on the bridge she meets Doza, Yeager, and Neeku, who of course likes her immediately, and they get to work repairing the station, something Nena seems exceptionally good at.

They make their way around the station, checking repair items off the list in quick fashion, with Nena working with a real purpose. They even get our old friend Opeepit back in the game when they repair his floor cleaning machine.

While in Aunt Zs, after repairing the garbage vaporizer and getting free drinks from Z, the pirates ask for assistance with a problem their having in their hangar. Nena is less than tepid around the pirates and doesnt trust them at all, but Neeku assures her they are friends and common allies against the First Order.

Kragan is deeply offended, even for a pirate, and threatens to teach Nena a lesson Nena doesnt back down and the two are face-to-face. A convenient power outage, killing the lights, gives Nena and Neeku the opportunity to get out of there. Theres a quick cut to Synara who is milling around, listening from afar with an inquisitive look on her face.

Back on the bridge, Nena tells Doza and Yeager about their discovery and Doza wants the pirates off his ship immediately. Yeager warns everyone that Kragan wont go without a fight, so rather than create violence, Kaz offers to investigate and fix it so that they cant steal anymore power.

That night, while the pirates are sleeping, Kaz creeps around their hangar with CB-23, hes about to unplug some large power couplings which he suspects is the cause of the power drain, when hes caught by Synara. He tells her he knows the pirates are stealing power, but she tells him she installed the couplings herself so thats impossible. Kaz is now confused and doesnt know what to think.

Synara mentions the only one whos been fiddling with the power has been Nena and states the obvious, if shes such a good engineer, why couldnt she fix her own ship? Kaz admits he really doesnt know anything about her and agrees to check out Nenas ship with Synara and see what they can find out.

Meanwhile, Nena and Neeku are installing regulators which will prevent ANYONE from rerouting power in the future. They begin to open up to one another about their pasts, and we learn that Neekus parents were Bantha Herder! And although they werent crazy about the idea of their son not being a farmer, they sold their prize Bantha calf just so he could be an engineer. Hes enjoying the conversation, noting that he doesnt often get to talk about himself, certainly not with Kaz around who does most of the talking, mainly about himself.

Nena reveals that she was captured by pirates as young girl and sold to a Hutt Clan, where she worked as a slave for many years. She was somehow able to escape, but this is the reason for her antagonism towards the pirates.

She begins to tell Neeku about the real reason why shes there but Neeku dismisses her, blinded by his affection towards her and doesnt want to hear it. She tells him I didnt come here to fix things but he has already moved on, so they continue to work on the list.

So, back at Nenas ship, Kaz and Synara are poking around trying to find a clue as to her true intentions. Synara cracks into her encrypted flight data where they learn that not only has Nena been tracking them for days, but shes been doing it on behalf of the Fist Order! 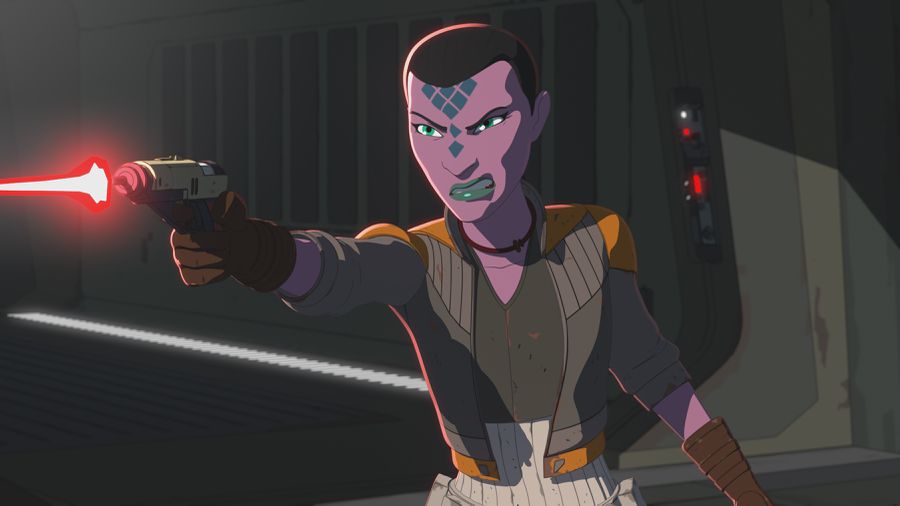 Synara offers to stay with the ship so Nena cant escape while Kaz goes to warn everyone. He finds Nena and Neeku in engineering where they are having a good time bonding.

Kaz pulls Neeku aside and tells him Nena is working for the First Order. Neeku thinks Kaz is just jealous of his new relationship and that hes being replaced as Neekus best friend. The power goes out again and Nena takes off running, using a data pad to power up her ship, we learn that the First Order has received her coordinates and are on their way.

Kaz and Neeku chase after her but they are stopped by Nena in the corridor who has a blaster and fires, telling them its too late and that the First Order are on their way. We learn that this whole time shes been supposedly fixing the station, shes been prepping the station for the First Order, making it vulnerable to an attack.

Neeku steps out in front and confronts her, accusing her of lying to him about everything, even her personal story. She admits she wasnt lying about the pirates kidnapping her and it was that experience that made her strong. He pleads with her to stay and join their fight against the First Order.

She refuses, instead asking Neeku to join her, saying shes never wanted a partner before but hes different. He refuses, saying he cant leave his friends. CB-23 uses the opportunity to sneak around Nena and disarm her. She takes off running, accusing Neeku of tricking her.

Almost on cue, a Star Destroyer comes out of hyperspace, Commander Pyre and the First Order have arrived, the surprise of everyone on the bridge.

In the hangar, Nena is somehow able to get past a waiting Synara and makes it on board her ship. Kaz and Neeku show up but its too late, Nena takes off. Synara gives Kaz a little I told you so shot in the arm.

We cut to Nena telling Commander Pyre that the Colossus is vulnerable and ready to be destroyed. Pyre congratulates her and that her payment has been placed in her account. Before she takes off into hyperspace, she expresses regret about the way things ended with Neeku. Tierny walks in and Pyre tells her he had his doubts about the saboteur but is glad to see its working out. Tierny responds coldly, saying

Its nice of you to admit that Im right. Youll learn to regret ever doubting me.

As the station is taking fire from some TIE Fighters, Neeku and Kaz are making their way around the platform repairing vital systems before they are destroyed. To get that final bit of power they need, Kaz asks the pirates for help who agree to shut down their Galleon power supply. And when Neeku removes the case bline from the main control station panel, the first thing Nena installed, the Colossus is fully restored, and they take off into hyperspace.

Pyre and Tierny discuss Nenas failure to complete her mission, and agree that the next time they see her, she is to be executed! Kind of on the nose and strongly indicates this isnt the last weve seen of Nena.

Back on the platform, Kaz and Neeku are walking through the market discussing the days events and Kaz expresses his regret over Neeku losing Nena as a friend. Neeku is a little forlorn, questioning if his general demeanor makes him vulnerable to heartbreak. Kaz insists that hes a good person and shouldnt change, cheering him up. Neeku perks up and tells Kaz that hes his bestest friend, which is better than best friend Theres also a small Bibo shout out as Neeku wonders aloud what hes up to. 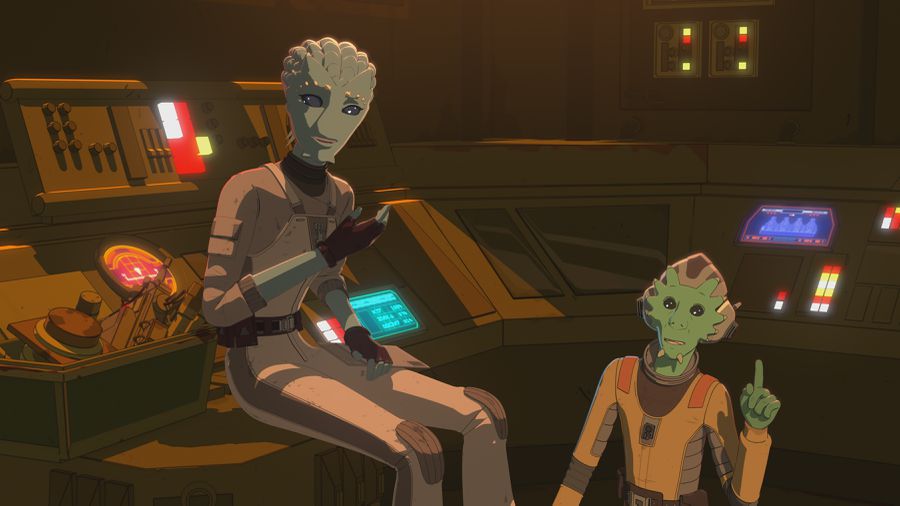 After last weeks middling episode, this week the show not only returns to form, but cranked out one of the best episodes this team has produced. Looking at it from a serial framework, it was damn near perfect television. It executed the case of the week motif extremely well all while keeping the overall narrative going in a steady forward motion.

Nena seems like a great new character, voiced by Meghan Falcone, who we probably havent seen the last of. Her backstory is complicated, something that clearly goes beyond simply working for credits. And now that shes drawn the ire of the First Order, shell be looking for friends wherever she can find them. Since Kaz and the rest are big on second chances, expect to see her back on the station at some point, needing their help.

The performances, particularly Josh Brener (Neeku) and Christopher Sean (Kaz), really highlighted a great script by the writing team of Sarah Carbiener and Erica Rosbe. It was punchy, quick, and vitally entertaining, something unfortunately last week just didnt do for me. Hopefully we get more from these two clearly talented folks.

The sequence where Nena and Neeku are making their way around the station, repairing various systems, was brilliant and really had a classic TV approach to it.

A little disappointed we didnt see Tam flying one of those Tie Fighters, but with her and Jace still at the cadet stage, its understandable.

Great episode and heres hoping they can keep the ball rolling and back this up with another strong episode.

Speaking of, next week weve got From Beneath

Flix takes Kaz and crew to his homeworld to acquire fuel from his family's refinery, only to discover the family's drilling has awoken something monstrous.

More Orka and Flix is never a bad thing and getting to visit Flixs homeworld of Drahgor III should prove to be a lot of fun. Hoping for some funny exchanges between Flixs family and Orka, bet on that happening.

Glad to see theyre finally addressing the fuel situation, something Ive been wondering about, and as far as what this monstrous thing they awake is, well see.