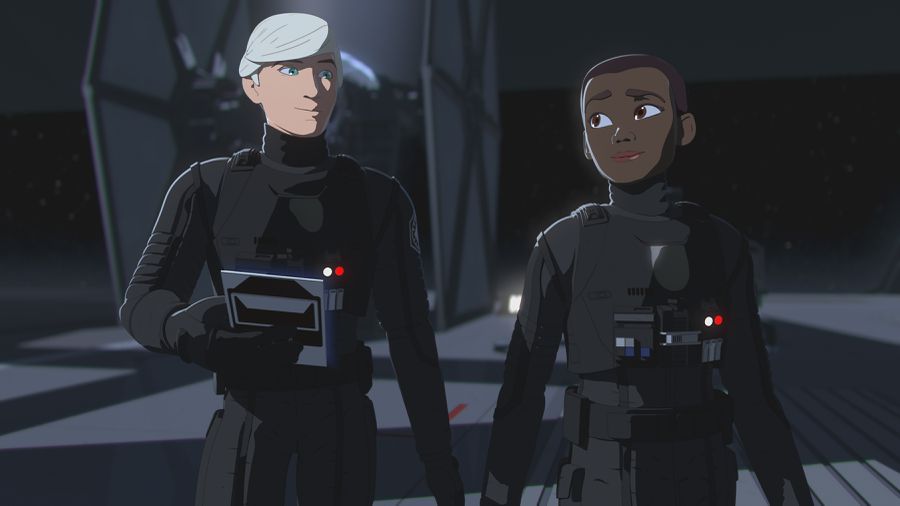 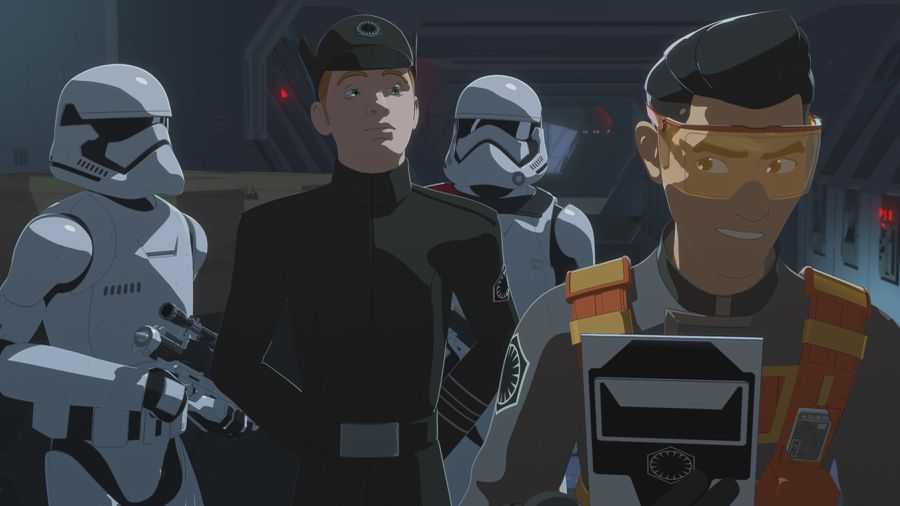 We start off in the hangar of the Star Destroyer where Jace and Tam are refuelling TIEs and complaining about the monotony of their jobs. Tam recalls having much more fun in Yeagers garage than their current lot in life. Lieutenant Galek interrupts their bemoaning with a supply run for them.

Theyre mission takes them to the Titan, a refuelling station that looks exactly like the Colossus, which is why they were chosen for this assignment. Once on board, Tam thinks she recognizes one of the technicians as Kaz which throws her off her game. Jace asks her whats going on, but she brushes him off.

Turns out that technician was Kaz who has snuck aboard the Titan along with Neeku and a painted CB-23. They are disguised as technicians (think Matt the radar tech) and are looking for a trans-binary deflector, something they desperately need. They have only 2 hours to sneak aboard, find what theyre looking for, and get back to the Colossus.

Kaz is spotted by some stormtroopers who want them to escort General Hux (Ben Prendergast) to the control toweryes, that General Hux! Neeku, who wasnt spotted, stays behind and hides. Kaz is disguising his voice from some reason?

Anyways, things go from bad to worse when the lift doors open to reveal Commander Pyre waiting for their arrival.
Turns out Hux is there by order of the Supreme Leader to get a sense of how many refuelling stations are in their possession. Pyre makes mention of the Colossus and the difficulty theyve had with it, promising to quell the Resistance onboard.

Jace and Tam make it to supply where Tam reminisces about the Office of Acquisitions back on the Colossus, saying she misses it. Jace thinks shes crazy for missing that trash heap

Neeku is still looking for the part they need when hes hassled by some troopers. Kaz shows up and gets him out of trouble, informing Neeku about Commander Pyre being onboard.

The part they need is in the hyperdrive chamber, but they first need to shut down the system in order to remove it safely. They head for the engine room to do so. 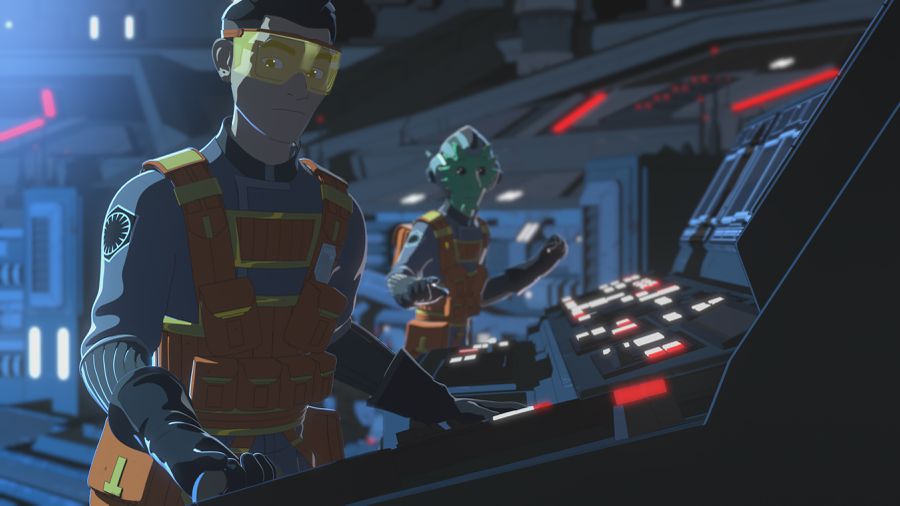 As Jace and Tam are leaving with what they came for, she overhears two troopers talking about the technicians, one being a Nikto Tam suspects its Neeku and gives Jace an excuse to go looking for them.

Jace spots CB-23 who he recognizes and follows her straight to Neeku and Kaz, who have found the hyperdrive chamber.

CB-23 goes to prep the shuttle while Neeku and Kaz do what they need to do to remove the trans-binary deflector. Just before they can, Jace breaks in and calls security on them. Kaz tries to plead with him but it doesnt work, Jace tells them theyve chosen the wrong side. He seals them in.

As alarms go off, Kaz and Neeku grab the deflector and try to override the controls on the door. Tam, who overhears whats going on, stops by a nearby terminal and sees a video feed of Neeku and Kaz. She sees the dilemma theyre in and decides to help them by unlocking the door.

Some troopers show up, but Tam sends them in the opposite direction as Kaz and Neeku make for the hangar. They must blast some troopers and narrowly avoid Commander Pyre, who along with Hux, is responding to the emergency.
Thanks to CB, Kaz and Neeku are able to make it to the hangar and eventually to their transport, despite Troopers everywhere.

Under fire, they leave the hanger in their transport and take off into hyperspace as Tam watches. Jace brags to her, thinking hes going to get a promotion out of this.

Hux is furious that they were able to escape and gives Pyre a dressing down. Pyre takes his lumps then contacts Agent Tierny, telling her that Kazuda Xiono was spotted. She asks him whether Tam was involved and sees this as an opportunity to finally destroy the Colossus, although she doesnt reveal how.

On their way back to the Destroyer, Jace is noting that the Colossus must be quite desperate to attempt a stunt like that. Tam responds in sympathetic agreement. 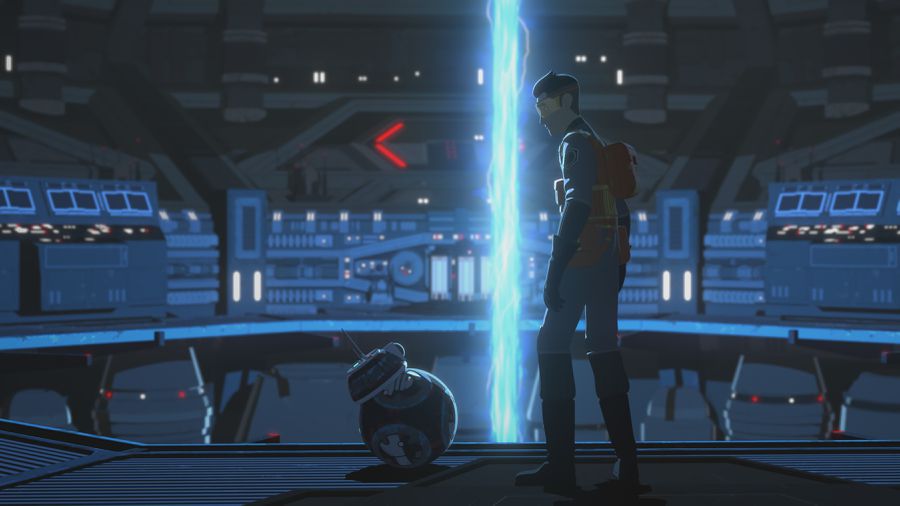 Great episode, especially after the last couple which have been subpar in my opinion. Theres no coincidence that every time the Tam scenario is involved, the show shines bright. This is not exclusive of course, but damn close.

This is the show operating on a high level with all the departments in near perfect unison. Great script, great acting, always great visuals and sounds, and it progresses not one, but two storylines.

The only slight is that Kaz, Neeku and Tam didnt interact at all, but that is more wishful thinking on my part. Not entirely practical when it comes to the plot of this episode. Kaz, Neeku, and CB disguised was pretty fun and fans of the Matt the Radar Technician should be thrilled now that the orange utility vest is now canon. Not sure why Kaz was disguising his voice but it was a nice fit with the glasses et al.

Nice little cameo by Hux, even though its mostly unnecessary and irrelevant. All it does is inform us that the re-fuelling stations are important to the success of the Fist Order, and that its reached the highest levels. He could have done that remotely, but his presence does reinforce the importance of these stations.

Having the Colossus not be unique is an interesting tidbit and obviously fills in that gap of why the First Order wants it so badly, they want the whole set!

I will say that Ben Prendergast does a really great job voicing Hux. In fact, kudos to the cast all-around in this one, who were great from start to finish. Suzie McGrath just kills Tam each time, even Elijah Wood shines bright as that snake, Jace Rucklin. Christine Dunfords Galek is great as the crabby, no frills Lieutenant and Im always wanting more of her.

Im so happy Tam is back, and Ive made it no secret the show suffers when shes not around. And as we inch closer to the end, Im wondering how far they plan on taking this? Shes obviously going to revert but when and at what cost?

As for next week weve got The Missing Agent

Kaz, Yeager and Synara trace a distress call to a planet where a Resistance agent has gone missing.

New characters this late in the game? Im good with whatever as long as Synara San is involved.

With Norath in the following episode as well, hes obviously playing an important role, or this serves as a mid season two-parter.

Hard to believe but theres only eight episodes left!