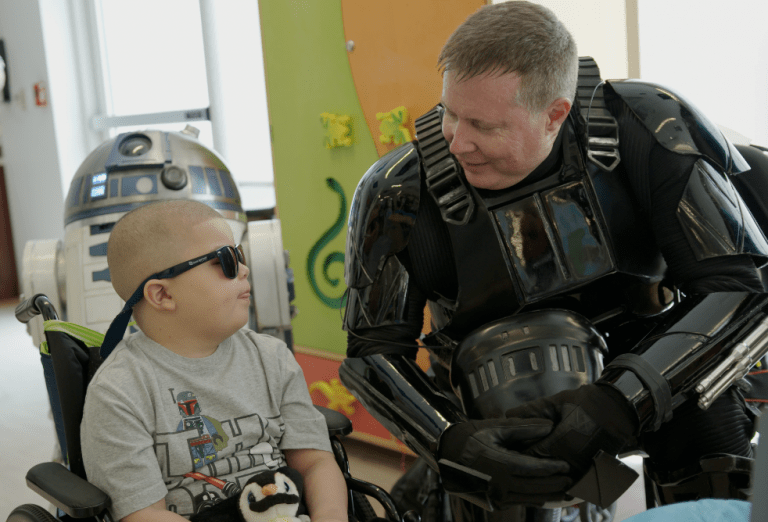 I had the honor of meeting Andrew McClary at Star Wars Celebration Chicago. In November of 2018, he lost his son Nicholas McClary to cancer and is dedicated to raising awareness for bone marrow donors. Below is his story. Get more information at his website Caring Like Nicholas.

Mission Number One  Bone Marrow Donor Awareness
Caring Like Nicholass first mission is an education and awareness campaign to bring the spotlight on the need for more people to register to donate bone marrow. This mission will be conducted by partnering with various groups, organizations, and celebrities and producing viral videos that these groups can distribute throughout their social networks to bring awareness to the problem and its solution. This mission will continue until either a cure for cancer is found or the donor registry has grown to such a size that finding a match is no longer an issue.

In November of 2018, Nicholas McClary, a very bright and caring teenager lost his life after battling cancer for three years. Despite beating cancer after two years of treatment, his lungs began being destroyed by a condition of his bone marrow transplant called GVHD, or Graft Vs. Host Disease. This happened because Nicholass doctors were unable to find a perfect bone marrow match in the national or international registry and the doctors were forced to use the next best thing, a haploid donor or donor who is a parent and by nature is at least a 50% match, his mother.

Only 2% of the population in the United States is even registered as a donors, yet over 2,000 kids lose their lives just like Nicholas because they are unable to find a perfect match. Part of the reason the registration numbers are so low is that most people do not understand what a bone marrow donation means, and how easy it is to donate to save someones life. Caring Like Nicholas is taking on the mission to educate the public on this need and increase the number of potential donors so less of these kids die every year.


About The 501st Legion
The 501st Legions members visit hospitals all over the world cheering up sick children. They can't cure cancer, but they can tell you a way that we all can help thousands of children world wide have a fighting chance.

Produced in partnership with the 501st Legion.

The 501st Legion is a worldwide Star Wars costuming organization comprised of and operated by Star Wars fans. While it is not sponsored by Lucasfilm Ltd., it follows generally accepted ground rules for Star Wars fan groups. Star Wars, its characters, costumes, and all associated items are the intellectual property of Lucasfilm. © &  Lucasfilm Ltd. All rights reserved. Used under authorization.