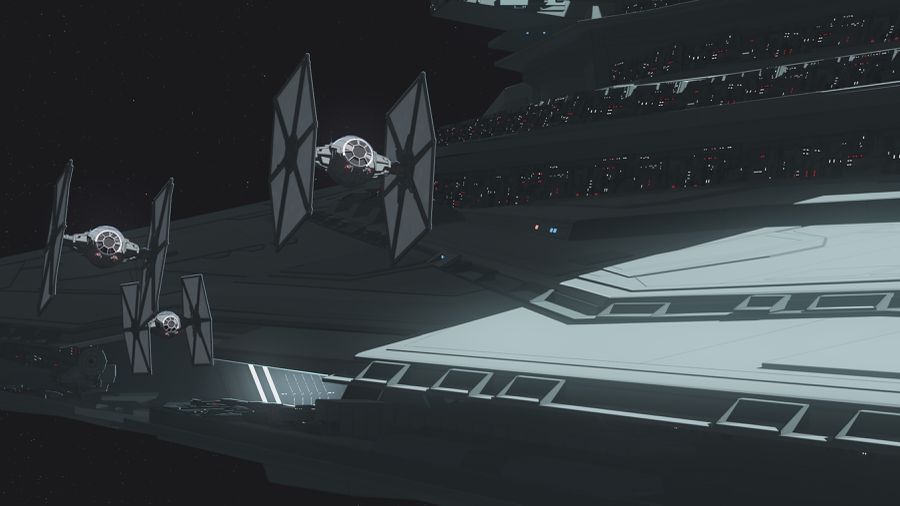 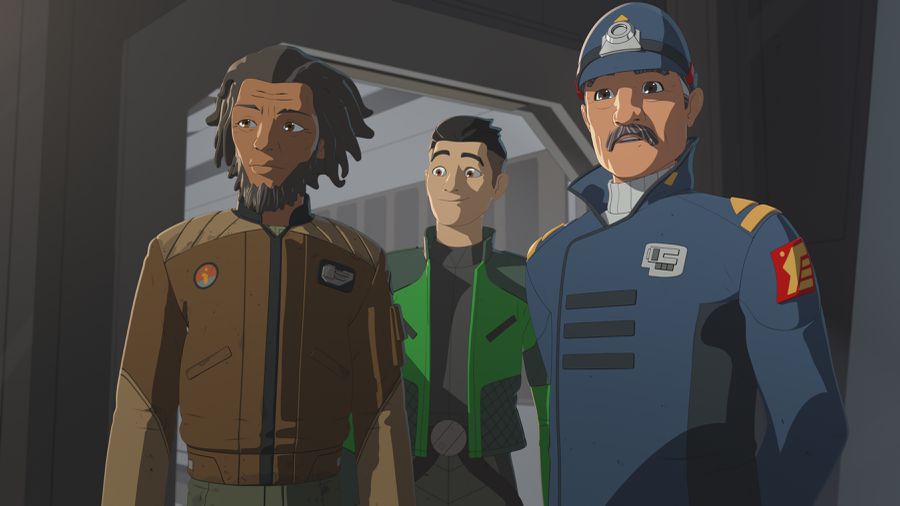 This episode starts off in the Aces lounge, where the team is lamenting on the fact that they got their butts kicked last week by the superior and more combat ready First Order. They all agree that they are outmatched outside of the much safer confines of the racing circuit, and that something needs to be done to course correct the situation.

All except for Hype Fazon that is, who refuses to believe theyre NOT the best pilots in the galaxy, himself in particular! Captain Doza reminds them that the stakes are high this time, life and death, and that they need help. He introduces them to their new squad leader, Jarek Yeager, and newest member, Kazuda Xiono!

Their reception is less than warm, mostly emanating from Hype, who doesnt like the idea of taking orders or being knocked down a peg or two in the pecking order. Yeager calms the situation by explaining to them that this doesnt make them Resistance members and implores to do it for Colossus, their home.

Kaz reminds them that he was top of his class back in the New Republic Navy days and offers his services in the form of tips. Hype laughs it off and assigns him the nickname Kaz-tastrophe

Cut to the Star Destroyer where Jace, Gava, and Tam are late for their first day of pilot training, and we meet a new character, Lieutenant Galek who gives them a dressing down. Shes seems like your typical tough as nails, drill sergeant type and will most definitely be tough to please. How Tam will respond to a much more rigid type of discipline is something well have to wait and see, but I suspect this is the structure shes been craving.

Back on Colossus the whole group is meeting over dinner so Yeager can go cover what they can expect from his flight school. We also get an awesome little moment where, mirroring Yeager, Bucket is holding his own astromech squad meeting, with each of the Aces droids in attendance. Its a blink and youll miss it type of moment but its awesome.

The Aces still have a poor attitude when it comes to being told what to do but for the most part go along with it, thanks to Torras more positive attitude. The Aces are used to being pampered, flying solo, and not taking orders, so this entire experience is new for them. Even Bo bullies Neeku a little bit, kicking him out of his seat and forcing Neeku to eat with the droids.

Yeager shows them an image of a nearby ice moon where they can perform exercises and drills. Nobody is happy about it, including Yeager, but they are out of options if they intend to compete with the First Order and their Tie Fighters.
They get to the moon and play a game of team tag essentially with Yeager and Kaz versus the rest. Their weaknesses are evident right away and it isnt long before Yeager and Kaz to take them all out. At one point, while skimming the moons surface, we see a giant tail come out of the water. Something very big lives on the moon but we dont know what it is, yet.

Hype proves while he may be the best individual racer, hes the worst when it comes to teamwork and combat flying and fails miserably. Back at the station, the team gangs up on him so he throws a bit of a hissy fit and he and his equally snarky astromech droid, R4-G77, storm off to Aunt Zs.

Kaz joins him to try and smooth things over but it doesnt have the desired effect. This is where Hype drops a little truth bomb, blaming Kaz for Tam leaving and that hes starting to see why. Now, because its Hype, this normally tense situation is handled with a little humour as he draws Kazs attention to his antennae, which twitch when hes upset.

Torra joins them and she talks a little sense into Hype, revealing that shes scared of what the First Order represents and needs him if theyre going to succeed. Torra is proving to be the leader of the Aces even at such a young age and is clearly her fathers daughter. 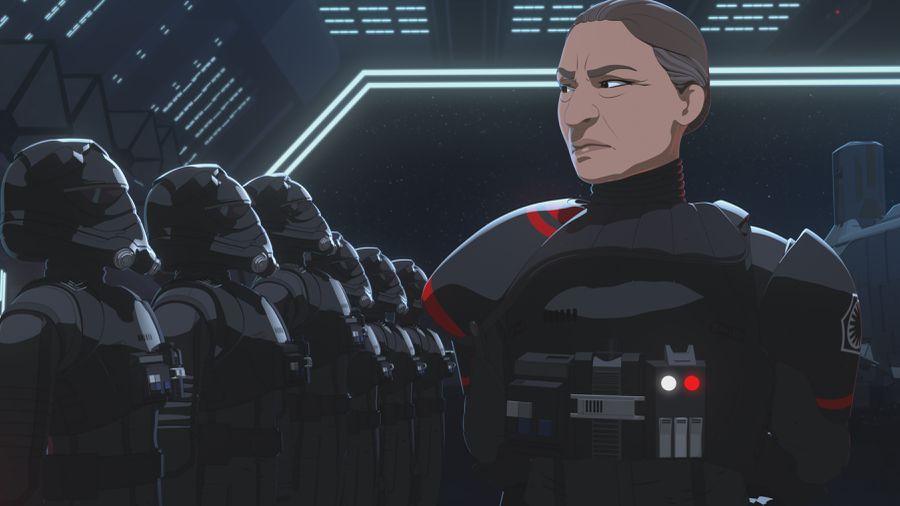 Back at the First Order, Tam and the rest have begun their pilot training as well. Where the Aces use stun weapons in training, the First Order only uses live fire, and as a bonus, the winner of this exercise will become squad leader. Tam is out to prove herself and gets the early lead, managing to impress Galek and Commander Pyre, whos watching from the bridge.

Shes got squad leader pretty much wrapped up when Jace gets into her line of fire, hes hit and loses control of his Tie. Tam helps him out moments before they both crash into the Star Destroyer. Pyre makes an off-handed comment about Tams heroics and Galek calls them back to the hangar, clearly upset.

Back on the Colossus, Hype rejoins the group in typical Hype fashion as he and Kaz are partnered up by Yeager this time around. Hype is a little more agreeable, thanks to Torra, but is still a little icy when it comes to Kaz.

So, they head to the moon to conduct more drills when that giant creature from earlier on reveals itself. Its some sort of giant moray eel type creature called a "jakoosk", that can fly as well and swim, and gets a hold of Yeager at one point, grabbing a hold of his ship. They switch to blasters, but it has no affect on the giant beast.

They all look to Kaz for help as hes the only one with combat experience, but hes at a loss, clearly having never faced anything like this before. But this is Hypes episode to lose, and he gets the idea to topple a bunch of ice pillars onto the creature, presumably knocking Yeager loose. He cant do it alone however and they need to work as a team to do this.
The plan has the desired effect and the creature lets Yeager go, proving that if they all work together as a unit, unlike the First Order, they can achieve success. They head back to the station.

Our Order is built on survival of the fittest.

Back on the Star Destroyer, Galek is predictably angry at Tam for rescuing Jace and takes squad leader from her. She berates them both saying, the Order becomes stronger by culling the weak and that Tams little stunt embarrassed her in front of Commander Pyre.

Tam and Jace both get the point and put their helmets back on. The conditioning of Tam Ryvora continues.
Meanwhile, things are a lot less bleak on Colossus as the Aces are celebrating their small victory on the ice moon and have gathered at Aunt Zs. Hype is elated his plan worked and is conceding that he couldnt have done without his teammates. He officially welcomes Kaz to the Aces and it seems they have somewhat settled their differences. 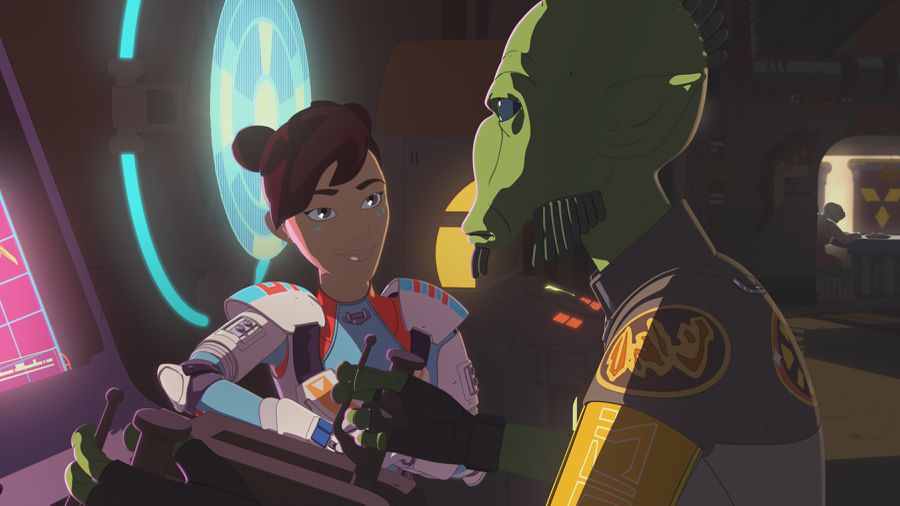 This episode was a punch clock episode, taking care of some business while keeping things moving at a steady pace. The payoff on an episode like this is obvious, once both sides are facing each other in a rematch of last weeks First Order beatdown. Think Rocky III and youll get the idea. Getting Yeager and Kaz integrated into the Aces, and at the same time, having the Aces all on the same page is a clear path to victory for them.

Having Hype blame Kaz for Tam leaving is only mildly interesting since it seems to have been forgiving by the episodes end, with not much fanfare. We know Hype and Tam have a history together, so, it could have been something worth exploring. Also, it was good to see Torra take on a leadership role within the group, mediating a return to the team for Hype and even providing some gravity on the situation. Pretty good for such a young age and clearly takes after her father in this regard.

For Tam, shes continuing her ascent into the First Order, learning that their way of combat is a kill or be killed, less team orientated approach. Shes skilled as a pilot, but firing on drones is one thing, firing on real people is an entirely different matter. Especially when those real people are Kaz and Yeager.

Worth noting, this is the first episode for both writer Mairghread Scott (Wonder Woman Bloodlines) and actor Christine Dunford, a nice debut for both. They each have pretty great resumes and I expect great things from them going forward, however it looks as though were losing Marighread to a Magic: The Gathering series.

Next week weve got Hunt on Celsor 3

Kaz suddenly doesnt trust the pirates? Thats a switch from last week where he was all about trusting them and even volunteered Kragan for a dangerous, but important mission. Its because of the pirates that the station was able to escape the First Order not only on Castilon, but at DQar as well.

I can only assume Kaz overhears something that raises a red-flag or two and thats what has changed his opinion of them, well see.

And what big problems means were not sure although there have been some rumors that it has something to do with the Sith. Could this be our first appearance of Kylo Ren this season?