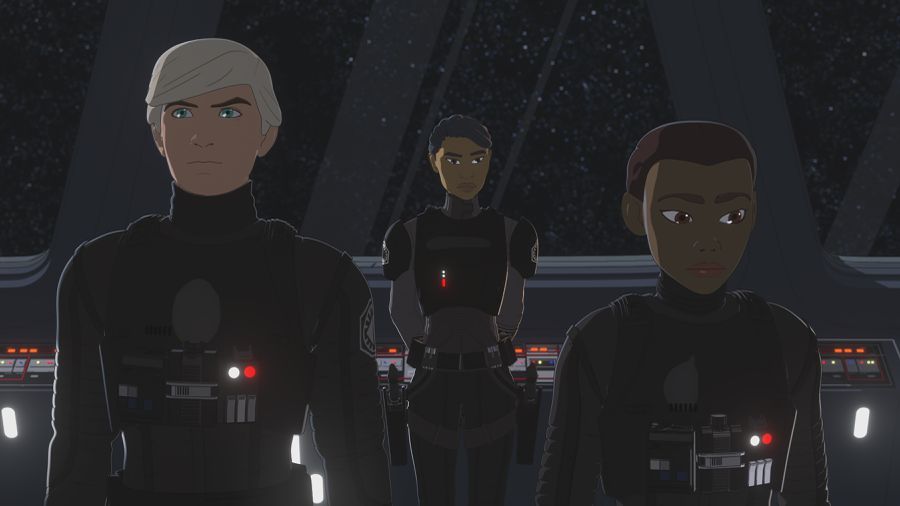 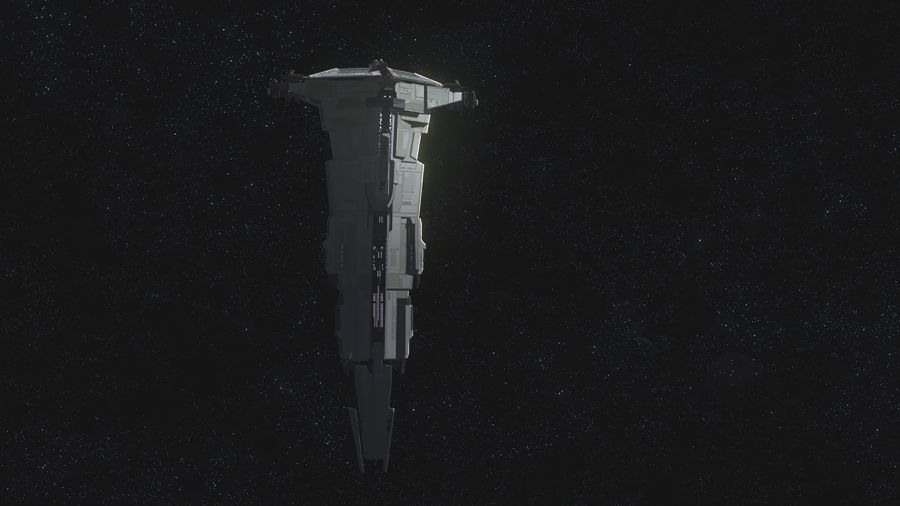 Last week we saw Tam take some intrepid first steps into the deep end of the First Order swimming pool. Not only was she assigned a designate, DT-533, but she donned the symbolically bleak all-black pilots uniform, embracing the helmet and eventual erasure of her identity. We know she's temporarily chosen the wrong side, but whether you agree with her decision or not, it takes guts nonetheless. Will this trend continue? Will Tierny continue to push Tams pressure points, keeping her emotionally bruised, battered, and off-balance? Lets find out!

We start off in Tams quarters where she replays Kazs message, the one he sent her last week on her personal communicator. For the first time in a while, she seems a little conflicted about her decision to leave her friends.

Then, almost as if on cue, fellow turncoat and chief opportunist Jace Rucklin (Elijah Wood) walks in and scolds Tam for withholding the commlink from their superiors. He convinces her that the right thing to do is turn it in and tell Agent Tierny about the message Kaz sent. I keep getting the feeling Jace is a Tierny plant, put in place to keep an eye on Tam and feed her BS, well see.

We cut back the Colossus where we get a glimpse of the pirates and the regular station folk mixing it up at Aunt Zs tavern. Something thats been hinted at by the show runners is Neekus fascination with the pirates way of life; in this scene we get our first glimpse of that. Since its unlikely characters like Neeku will have a place in Star Wars after Resistance is over, could having him join Kragan be such a bad idea?

Synara, Neeku and Kaz discuss how the station is nearly out of just about everything they need to survive including food, water, gorgs, and fuel. Kaz is confident once they reach DQar, the Resistance will re-supply them with everything they need, and he also tells Synara that he contacted Tam, but to keep it a secret. Synara doesnt trust Tam anymore but Kaz is still holding out.

In the control tower, Kaz receives an encoded message from his father! Turns out his family was not on Hosnian Prime when the Starkiller Base destroyed it at the end of last season, lining up with The Force Awakens. He tells Kaz to get away from DQar as soon as he can and that hes put the family in danger by revealing himself to the First Order. Before the transmission cuts off, Kaz tells his father that people are counting on him now and he cant abandon them, but more on that in a bit.

The signal cuts out as they enter the DQar system and are unable to reach anyone on the surface. They survey the damage left behind by the First Order and come to the horrible realization that the Resistance base on DQar has been destroyed. Kaz tries to reach Poe and the Resistance but of course, no one responds. Yeager reassures him that Poe, Leia and the rest are likely safe and sound somewhere else.

Low on coaxium, they decide to explore the wreckage of the First Order Dreadnaught for anything they can use to get away and resupply the station. Kaz gets the idea to ask Kragan and pirates for help since they are professional salvagers. Kragan agrees, although he has a condition or two, and they send a party to the Dreadnaught on the Galleon.

Back on the Star Destroyer, Tam took Jaces advice and turns in her communicator to Tierny, telling her and Commander Pyre about Kazs message. They download the intel on the communicator and learn that the Colossus is in the DQar system. They leave for DQar immediately. Later in Tams quarters, Tierny thanks her for the intel and empathizes with her about Kazs betrayal, confessing to have listened to the message. As a gift for turning in the communicator, Tierny invites Tam to join her on the bridge as they destroy the Colossus once they arrive at DQar. Tam seems a tiny bit hesitant, but agrees not wanting to seem ungrateful. 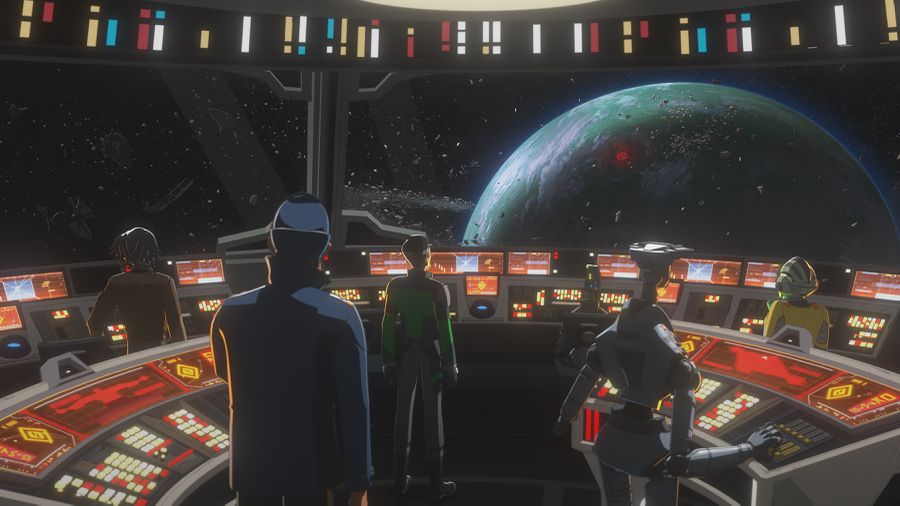 Meanwhile, the Galleon boards the Dreadnaught which still has some power and Kaz, Neeku, CB-23, Synara, Kragan and the pirates head deep inside the ship. Neeku continues to be curious about the pirates way and asks them about their chosen lifestyle, hinting that he enjoys their happy-go-lucky philosophy indicating it could be the pirate's life for him.

As the pirates salvage whatever they can carry, Kaz and the others find the coaxium they need. Unfortunately for them, for safety reasons, the coaxium is locked up and will take some time to unsheathe. But time has run out as Doza sends them an urgent message, the First Order has arrived.

Pyre immediately launches a battalion to engage the Colossus, so Doza scrambles the Ace pilots to keep the Tie's busy while Kaz and rest finish salvaging the Dreadnaught. The Aces are holding their own but are outmatched by the First Order pilots who are more combat ready than Torra and the rest, who have grown accustomed to simply racing. Their best pilot of course is Yeager, but hes on the bridge of the Colossus with Captain Doza, and technically, isnt part of the Aces, yet.

Kaz and the rest catch a small break when the Star Destroyer fires on the Dreadnaught, shaking the coaxium loose, and they make a run for the Galleon. From the bridge of the Destroyer, Tam is watching the battle with a look of concern for her friends but says nothing.

The Dreadnaught is destroyed but not before the Galleon can escape and make for the Colossus. They are under heavy attack from the Tie Fighters and the Star Destroyer and suffer some damage, so they are forced to engage the Ties. Doza calls back the Aces and they all barely make it back to the hangar, thanks to some fancy flying from Valik.

The station is taking some heavy damage from the Star Destroyer and the shields are failing as Doza gets 4D to calculate the jump to lightspeed. He tells Kaz that if they dont get the coaxium in the hyperdrive chamber fast, theyll be goners. Seconds before the station is destroyed, they manage to load the fuel and they take off into hyperspace, avoiding death. Tam very quietly breaths a small sigh of relief.

Only a minor setback for the First Order it seems as Pyre is confident theyll catch up with the station again in a matter of time. Tierny tells Tam she expects that should Kaz attempt communication again, she will notify them immediately, to which Tam agrees to do so. She dismisses her, but in a display of authority and mind games, she reminds her to put her helmet back on.

Pyre wants Tam to undergo more conditioning, commit fully to their cause, but Tierny wants to keep Tam emotionally off-balance, believing that will serve them best. Its clear she thinks that if Tam remains uneasy and uncertain of her decision to join the First Order, it leaves open the possibility that shell be open to communication with Kaz again.

Safe for now, Yeager is confused at how the First Order was able to find them so easily, and even Synara is questioning Kaz about it, knowing of course he sent that message to Tam. Kaz, and Neeku, refuse to believe it was the message that allowed the First Order to find them because that would mean Tam had given them up. A certain reality is starting to set in for Kaz though, that Tam may not actually ever forgive him and stay with the First Order permanently. He of course doesnt know about Tams small sense of relief when her friends were able to get away from the First Order before being destroyed.

One of the things I really wanted to see going into this second season was how the citizens of Colossus would co-exist with the pirates. Turns out, pretty well actually, and even though it took some convincing, Kragan seemed pretty agreeable when it came time to help the station, for a pirate anyways. Now obviously they made out okay themselves and he did stress that Doza would owe him big time, something that will play a role later in the season Im sure, but it really didnt take much nudging.

It was nice to see the Aces again as well, but like always, its never long enough. That's the tricky thing with dogfights and space battles, the longer they last, the less realistic they become, but this show seems intent on using the Aces's sparingly. Usually, that means we can expect something much bigger is on the way, similar to how last season played out, here's hoping.

Having Kaz's parents survive the Hosnian System attack is an interesting, and truthfully kind of disappointing decision by the show. His determination to see all of this through in part came from the fact that the First Order inflicted irreprehensible damage on him personally, and it also brought about his best moments from last season. So, it seems like an odd reversal and a little on the safe side for me personally, but the show isn't just for me and more kid-centric so. And looking at it from a writer's perspective, you can see how something like this, their perceived murders, would be a handy mechanism if you were looking to take your lead character to the next level, without inflicting too much chronic damage.

We see cracks starting to form on two fronts when it comes to the Tam/First Order situation. For the first time since leaving her friends behind, Tam showed the tiniest, blink and youll miss it, bit of emotion when it came to her friends being under attack. And she was clearly relieved when they managed to escape, although she did a good job of hiding it from Tierny. Not to say Tierny has lost control of the situation, quite the opposite really, she's clearly a master manipulator and has a few more tricks up her sleeve presumably.

For his part, Kaz showed us signs that doubt may be starting to creep in. Up until now, hes maintained that Tam is just upset, and isnt worth giving up on. But, knowing that it was probably her that turned in the communicator, he may be having second thoughts.

These two groups are headed for more of a confrontation, and Tam will be getting her own Tie Fighter next week. So, when the time comes, and it will come, will Kaz and Tam be able to fire upon one another? And what about Yeager? Tam was like a daughter to him and him a father to her, could they possibly fire at each other if they knew who was piloting the craft?

So, the scenario I mentioned above is happening sooner than we thought. It looks like both Kaz and Tam will indeed have to make the decision to pull the trigger or not when facing each other. This could be the breaking point for both and I cant imagine any scenario where either one of them is able to do it.

And how will the other Aces react? They dont have the same relationship with Tam as Yeager and Kaz do so.