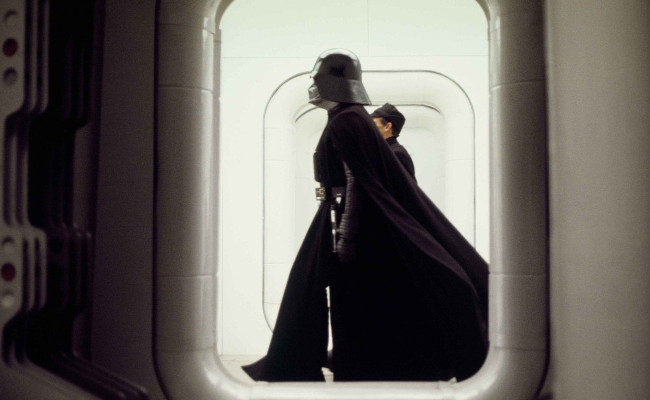 Could Vader Be One Of The Super Secret Unannounced Star Wars Spinoffs?

A friend of ours who was very prevalent in the Star Wars community during the prequels with spoiler reporting on this very website has recently reached out with some incredible news he recently overheard as he was leaving E3 2018. You can take it with a grain of salt as rumor for now, but I trust this source.

I was leaving the front door w/huge crowds, then crowds thinned, their conversation picked up, eventually no one else around (except me) walking behind them 10ft, they thought they were all alone, consumed with this big life break and freaking out. Couldnt believe what I was hearing. Replayed it a million times to make sure I heard it right.

The conversation I overheard was between 2 (name removed by TFN) Digital VfX guys  they were talking about a big sci-fi franchise film no one can talk about publicly yet that officially doesnt exist  no artwork, not even the code name of the project yet. BUT, the one (name removed by TFN) guy, who was on set visual effects stand in on (movie name removed by TFN), said he caught the eye of a Vfx producer at ILM based on some of the work he had done specifically for that film, in particular to tall, costumed actor work he specifically headed up and apparently was incredible at. Said that the lead character in this new film, on which ILM is taking visual effects lead, is centered on a tall costumed, masked character from the biggest sci-fi franchise ever with the highest level of secrecy surrounding the film. This character is the lead in the film, the story is about him. No details on story, artwork -- even official meetings about the project have to happen in person and in person alone. Nothing electronic allowed in the room. No texts, no phone calls, no emails about the film are out there and will be allowed out.

He had no idea I was there, listening (unintentionally I promise) the whole time. Crazy stroke of luck I suppose? He was talking so freely. Anyhow

So the (name removed by TFN) guy was offered to work on the unnamed up to this point project, and he said this sure sounds like a Darth Vader stand-alone film to which the other guys replied yup  thats it  and that he would know more in a couple days. He and the guy from ILM (vfx producer) had a lunch meeting the Saturday after E3 in LA to talk details as it moves into pre-production. This guy is going to be a vfx supervisor and jump ship to ILM to work on Vader.

This sure fits with the more films we have yet to announce from LFL recently.