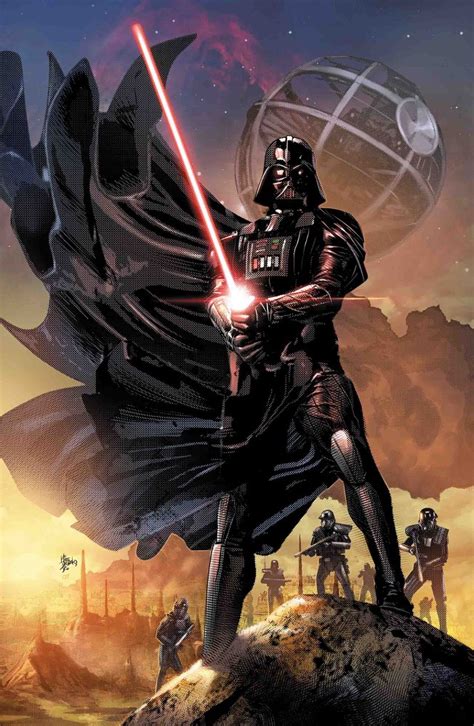 Spoilers ahead for Darth Vader Annual #2

In the latest edition of the excellent Marvel Darth Vader comic series written by Charles Soule, which is the gift that keeps on giving by the way, we see a side of Darth Vader that perhaps we haven't seen before.

The series has established that his relationship with Grand Moff Tarkin is strained to say the least and in this latest issue it appears Vader has had enough of Tarkin and his infatuation with the yet to be built Death Star. In a tie in to James Luceno's "Catalyst" and Rogue One: A Star Wars Story, we see Vader possibly assisting in the destruction of the first space station by tipping off Lyra Erso, the wife of Galen and mother to Jyn.

Don't be too proud of this technological terror you've constructed. The ability to destroy a planet is insignificant next to the power of the Force.

It's no secret Vader was never a fan of the first Death Star, which he viewed as a direct defamation of the Force, but would he go so far as to aid in it's destruction just to teach Tarkin a lesson? This latest issue strongly hints at just that fact. If you look at the panels below you can see the confrontation between Tarkin and Vader, a somewhat familiar exchange, which leads directly to the panels involving Lyra Erso who is given a dire warning while on an expedition on the planet Alpinn...

There is no mention of this exchange between Lyra and the droid in either "Catalyst" or Rogue One and while Lyra definitely comes to believe that the Death Star's use is for pure evil, thanks in part to Has Obitt, this is portrayed as a more methodical and mindful conclusion thanks to her growing suspicions of Orson Krennic and own personal inquiry.

As for Vader, would his frustrations with Tarkin supersede that of his feelings towards the Rebel Alliance to the point of sabotaging the Emperor's plans for complete control of the galaxy? Kind of seems that way right? In Star Wars: A New Hope, Vader seems to do his very best to thwart the Rebel's attack on the space station and if not for an inspired Luke Skywalker, likely would have succeeded. This latest issue contradicts that notion however and we'll never know if Vader was giving it his all or not knowing, either through a Force premonition or some other means, the destruction of the "technological terror" was inevitable.

So, what does everybody think? Does this mean Vader sent that droid to tip off Lyra which indirectly leads to the destruction of the first Death Star?

Darth Vader Annual #2 is on sale now and you can order it by visiting Marvel.com.