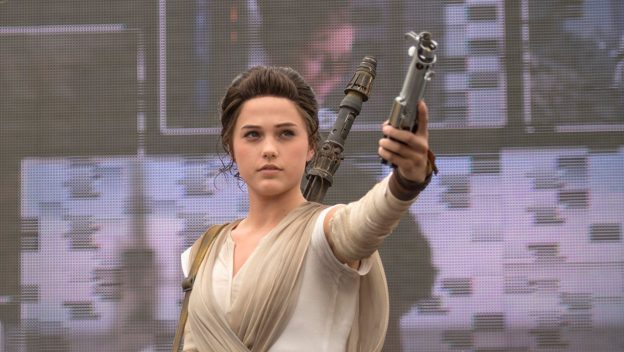 From the Disney Parks Blog:

As the development of Star Wars: Galaxys Edge continues at Disneyland park, Star Wars Launch Bay in Tomorrowland is your go-to destination for all things from the galaxy far, far away. And beginning this May, a new face will join this interactive experience with the arrival of the Resistances newest hero, Rey.

A scavenger from the planet Jakku, Rey is a survivor toughened by life on a harsh desert planet. Despite dismissing herself as no one, she learns that her life is being shaped by the mysterious power of the Force. Central to the stories of Star Wars: The Force Awakens and Star Wars: The Last Jedi, Rey has become an inspiration to a new generation of Star Wars fans.

Joining Chewbacca, Rey will visit with guests at the Light Side character experience throughout the summer, with Darth Vader and Kylo Ren encountering guests at the Dark Side area. Be sure to check the Entertainment times guide upon your arrival to the park, as encounter times are subject to change.