The Weapons of Solo: A Star Wars Story

Hokey religions and ancient weapons are no match for a good blaster at your side, kid.

With Force users, both good and evil, capturing our attention with their mystical powers, monastic samurai inspired clothing and flashy lightsabers, its easy to forget the galaxy is predominantly non-force users. They dont have magical powers, they wear whatever their occupation or economic situation affords them, and they certainly dont use lightsabers. Well, theyre not supposed to use them anyways. So how do these saps defend themselves? The old fashioned way of course, with a blaster!

I am of course talking about Han Solo and Chewbacca and their individual weapons of choice, the DL-44 Heavy Blaster Pistol and the Wookiee Bowcaster or Laser Crossbow. While heavily modified, the DL-44 that Solo used operated like a standard blaster by firing a blaster bolt of plasma energy from a replaceable or rechargeable power pack. Chewbaccas Bowcaster works differently as it projects metal quarrels, which are just bolts, enveloped in plasma energy at very high speeds. 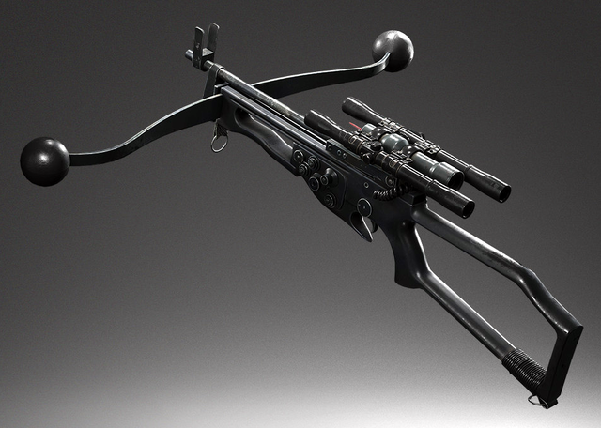 Each made their own modifications to their weapons to serve their individual needs. For Solo, he removed the barrel sight which allowed him to be quicker on the draw. Chewie, who had been making Bowcasters most of life, fitted his models with an automatic cocking system which was unused by any other person(s).

So, we know the last known Bowcaster in existence was Chewbaccas and was seen in action as recently as The Force Awakens. Who can forget that hilarious moment when Han supposedly uses it for the first time, looks at Chewie with that Han smile and says, "I like this thing." And although it wasnt used for battle in The Last Jedi, we do physically see it in the film. Its at his side while he is preparing to eat Porgs over an open fire and thats too much fire power for Porgs so. If that is indeed the Bowcaster hes had all along, since its first appearance in Episode IV: A New Hope, then it's likely well see by the end of Solo: A Star Wars Story.

The only question that remains is do we see him build one or recover one. We know he had one in Episode III: Revenge of the Sith but fell on hard times after that episode as he was captured and enslaved by the Empire. We of course know that he is then freed by Han Solo and they go on grand adventures together forming a lifelong partnership. When Chewie was captured by the Empire was his Bowcaster destroyed or simply stowed away in some sort of armory lock up? Since Bowcasters are native to Kashyyyk and due to their weight can only be fired accurately by Wookiees, you know since their strong, would the Empire have use for such a weapon? Likely not, which means it was probably destroyed.

Since Chewbacca was highly skilled at making Bowcasters and we know his most recent one, the one hes had since before A New Hope, was fashioned out of a Stormtrooper E-11 Blaster Rifle I would guess he was forced to make a new one. If that's the case, that's something I would like to see very much. 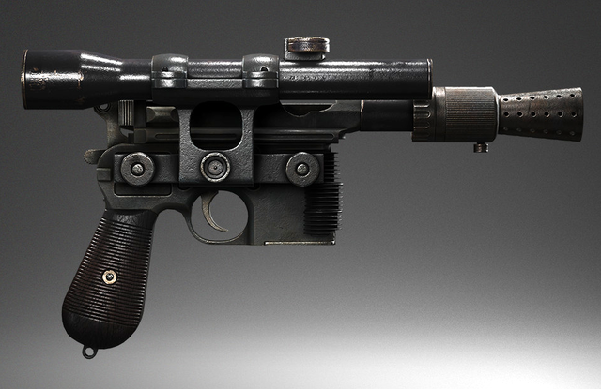 As for Solos BlasTech DL-44, he is rarely seen without it and his weapon of choice has become synonymous with the Corellian smuggler. In fact, the only other characters in the Star Wars universe of note to use one was Jedi Ezra Bridger of Lothal and Dr. Chelli Aphra, famed archeologist who worked with Darth Vader for a time. Known for its ability to penetrate Stormtrooper armour, its no wonder it was a favorite of those who werent on board with Imperial rule. It was because of this the Empire outlawed its purchase and use.

While it doesnt specifically state when Han acquired the DL-44 that he would make famous, its known that it was sometime before the Galactic Civil War. We also know that it was during his prime smuggling and criminal years, two things we are expecting to see plenty of in the upcoming film. Theyve made it front and center in much of the Solo: A Star Wars Story promotional material so can they have something so iconic just simply appear on screen without explanation? In the most recent trailer there is a shot of Tobias Beckett tossing a DL-44 to Solo, whether or not he is giving it to him for the first time or returning one to him we just dont know yet, not within the context of the quick look.

If that is indeed the pivotal moment where Han acquires his blaster then it is now considered canon and Tobias Beckett is responsible for Han Solo getting a DL-44. With so many of the details about Han Solo being objectified and considered highly valuable within the historical framework of Star Wars, its safe to say his signature blaster is right up there with the gold dice, the black vest and even the Millennium Falcon.

Im hard-pressed to believe this is a detail they can simply skip over as it is vitally important of the make up of his character and speaks to his philosophy when it comes to his practicality and skeptical nature. Plus, like Chewbaccas Bowcaster, it wouldnt take much effort to simply have him pick up the blaster and give the camera a little wink if you know what I mean. Sure, it would be on the nose, but these subtleties are what the fans appreciate about good Star Wars filmmaking, so it would go a long way and be more than just simple fan-service. It would show that Howard and the others are paying attention and that viewing these films, more than other franchises, can sometimes be more than just a spectator sport.

This film more than most is all about checking boxes, making sure those pivotal moments in the life of Han Solo, and Chewbacca, are depicted on screen with the veneration they deserve. Whether its DL-44s, Bowcasters, Millennium Falcons or Kessel Runs these are all unique to Solo and special to Star Wars fans and trust me, well be looking for them.