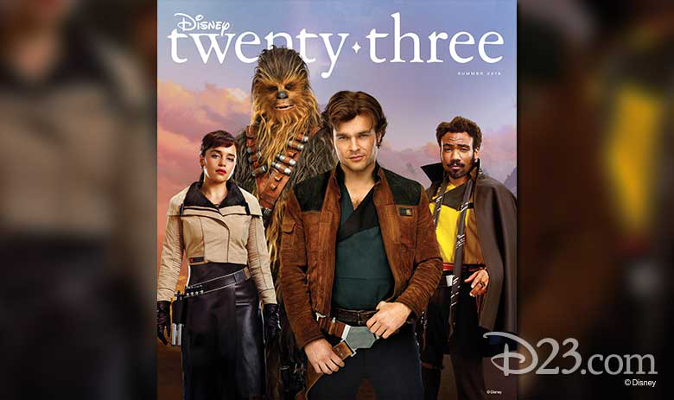 Disneys summer movie lineup this year is jam-packed with films both incredible and Incredibles. The new issue of Disney twenty-three gives you a behind-the-scenes look at the summers biggest films and its so big, in fact, that every reader will get to enjoy five stunning covers. Check out the covers below, featuring Avengers: Infinity War, Incredibles 2, Ant-Man and the Wasp, Christopher Robin, and Solo: A Star Wars Story.

Go inside the thrilling ride that will be Avengers: Infinity War with Directors Anthony & Joe Russoalong with Scarlett Johansson, Zoe Saldana, and Sebastian Stan. And exclusively for Disney twenty-three, enjoy the stunning artwork featuring 14 characters heading into a battle, The Road to Infinity War10 Years of the Marvel Cinematic Universe, by Marvels Ryan Meinerding.

Jump to light speed with Solo: A Star Wars Story, featuring exclusive interviews with director Ron Howard and star Alden Ehrenreich, who talk about filling the big boots and capturing the swagger of the galaxys greatest smuggler.

Mr. Incredible (Craig T. Nelson) takes off on his characters greatest adventure yet: being a stay-at-home dad in Incredibles 2. Plus, Edna Mode gives her list of the best-dressed Disney characters.

Ant-Man and the Wasp director Peyton Reed reveals he had a special visit from exterminators after finishing the first Ant-Man, while the hilarious Evangeline Lilly talks about playing it cool with co-star Paul Rudd.

Rounding out the summer, Christopher Robin promises to charm us, and Ewan McGregor, who plays the title character, talks about relating to the challenges of the now-grown-up Christopher, as he meets up once again with Winnie the Pooh and his childhood friends.

The issue also takes readers down the aisle for a first-look at Freeforms Disneys Fairy Tale Weddings. Disney twenty-three spoke to some of the happy couplesand happy hosts Stephen tWitch Boss and Allison Holkerabout tying the knot at the happiest places on earth: Disney theme parks and resorts.

Plus, in honor of the 20th anniversary of Mulan, actress Ming-Na Wen shares some of her memories of making the beloved filmand the traits she thinks the animated warrior shares with Wens current role as Agent Melinda May on Marvels Agents of S.H.I.E.L.D.

Also included in the summer issue of Disney twenty-three:

From the Desk of Marvel Studios President Kevin Feige
A celebration of all things tiki at Disney parks and resorts around the world
A look at the groundbreaking short Three Little Pigs
The rich historyand vibrant presentof the El Capitan Theatre in Hollywood
Regular features including Character Analysis, D Society, and Ask Dave

Disney twenty-three, which is delivered directly to fans doorsteps, is offered exclusively to D23 Gold and Gold Family Members as a benefit of their membership. The latest issue will begin arriving in mid-April.