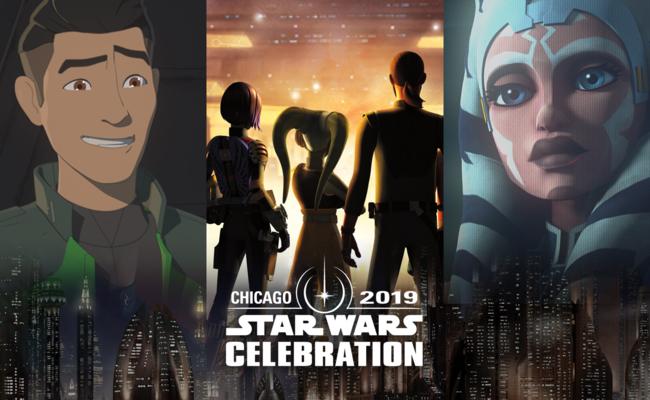 I remember being at the first Clone Wars panel and thinking animation is the future of Star Wars storytelling.
This was pre-Disney of course, but I never could have imagined the epic journeys we've taken through the Star Wars universe via animation. Below are some new details laying out three animation panels scheduled for Star Wars Celebration Chicago which is NEXT MONTH!

GET A SNEAK PEEK AT WHATS COMING FROM STAR WARS: THE CLONE WARS AND STAR WARS RESISTANCE, AND REUNITE TO REMEMBER STAR WARS REBELS!

When fans first learned that Star Wars: The Clone Wars was saved during a special panel at San Diego Comic Con last summer, the room erupted in cheers and tears.

Now, nearly a year later, attendees at Star Wars Celebration Chicago will be the first to get a closer look at whats to come for Anakin, Ahsoka, and the rest of the beloved characters from the original series when new episodes premiere exclusively on Disney+.

On Sunday, April 14, get together with Dave Filoni and special guests to celebrate the return of Star Wars: The Clone Wars and share an exclusive sneak peek at things to come.

But first, on Saturday, April 13, join Filoni, Vanessa Marshall, Tiya Sircar, and Taylor Gray for the Star Wars Rebels Remembered panel. The Ghost crew went from a single scrappy crew of rebels to a vital part of the larger cause over four seasons. Although the series is over (and there wont be a surprise announcement of a new series during this panel), well never forget the characters who deepened our knowledge of the Force, made us laugh and cry, and gave us hope.

And on Monday, April 15, its time to join the Resistance for a look back at the shocking season one finale and a preview of the second season of Star Wars Resistance with Executive Producers Justin Ridge, Athena Portillo, Brandon Auman, and members of the cast including Christopher Sean, Suzie McGrath, Scott Lawrence, Myrna Velasco, and Donald Faison.