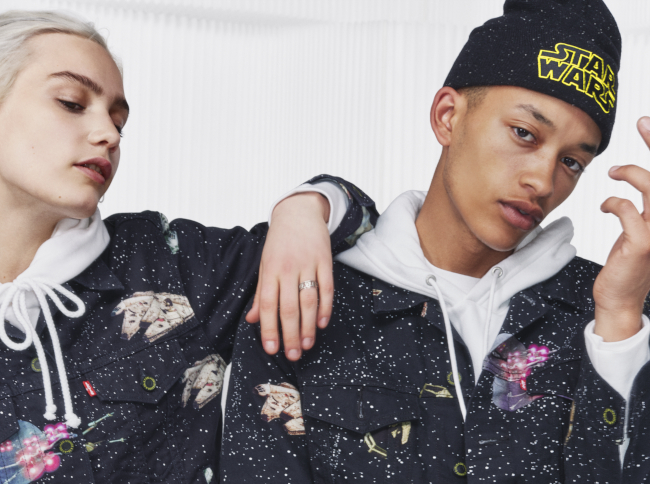 LEVI's have announced their new Star Wars Collection. Here's the official press release below. For more photos of product from the line please visit the official site.

Inspired by a galaxy far, far away...

Few things in pop culture have inspired as much fan affection, nostalgia and devotion as the Star Wars saga. Since Star Wars: A New Hope debuted in 1977, the legendary space fantasy has occupied a special place in our imaginations, a place fans are eager to revisit when Star Wars: The Rise of The Skywalker hits theaters this December. The beloved story that began over 40 years ago will finally get its long-awaited conclusion. To mark this seminal moment, Levis®a brand known for its own share of fan affection, nostalgia and devotion - has teamed up with Lucasfilm to create a special-edition collection celebrating the epic history of Star Wars.

Coinciding with the release of Star Wars: The Rise of The Skywalker , and centered around the iconic characters from the original Star Wars trilogy, the Star Wars x Levis® collection features a range of both classic Levis® icons and streetwear-inspired favorites: tees and hoodies as well as Trucker Jackets and jeans in a unique array of washes. Every piece also features iconic elements from the Star Wars galaxyfamous archival graphics of favorite characters and starships from the original films, plus unique co-branding elements like Levis® leather patches, buttons, tabs, printed pockets and the famous Levis® Batwing logo, all with a Star Wars twist. And of course, what would a Star Wars collection be without instantly recognizable quotes from the films printed or embroidered along backs and sleeves including I am your father, In a galaxy far, far away., and, perhaps best of all, Chewbaccas immortal GGWWWRGHH!!!!

Lucasfilm and Levis® are San Francisco neighbors. When we found out that the final chapter of the Skywalker Saga was coming at the end of 2019, we bundled up our Jedi and headed to Lucasfilm looking for droids. And heres a barely known, fun fact: Luke Skywalker was wearing Levis® in the original trilogy  white Levis®! Now its our turn to return the compliment with Vader, droids, Chewie and Leia. - Jonathan Cheung, Senior Vice President of Design Innovation at Levis®.