Soon enough well know the fate of most of our favorite Star Wars Rebels characters as the show ends March 5th. While thanks to canon materials such as Rogue One, Forces of Destiny and novels/comics we do know whats in store for a few of our Imperial and Rebel friends. Death comes to us all but some sooner than others and one thing Rebels hasnt shied away from is the doing away with of several characters in its four seasons.

It is war after all and like all wars there are casualties. While not counting the umpteen numbers of Imperial and Rebellion forces that have died because of explosions, crashes, and firefights and so on, there have been a number of significant deaths. The show is certainly not a visual blood bath however, whether its the Force keeping blaster fire slightly off target or just kid friendly motivations with regards to storytelling, the show has kept the overall death toll down. And thats certainly compared to the very high body count that we saw in The Clone Wars which had well over a hundred significant kills.

The deaths in Rebels, I would argue, have been integral to the storytelling and serve a purpose. A critique of the show is the high number of plasma blasts gone askew, but I would counter with the writers simply dont incorporate senseless violence as a story mechanism. Realistic or non-realistic is not necessarily a factor in this universe and shouldnt supersede the desire to simply tell a good story.

Officially the kill count in Rebels for key characters totals 34 but that doesnt include the thousands of civilians and Imperials killed each time a ship or base or depot is destroyed. Just an Imperial I Star Destroyer alone has a compliment of 20,000+ so if you look at Season 3 Episode 14 in an episode called Warhead you have a massive body count there when one is blown up. These are few and far between however as the battles in Rebels tend to be isolated and of a much smaller galactic scale. There are great videos online which track each and every Imperial death, I recommend them.

So, lets look back at some of the key deaths from each season that you may have forgotten or simply didnt notice. Point of note, Ahsoka Tanos death, although likely, is not a certainty at the time of this writing so shes not included in this list. Also, periphery deaths like non-intelligent droids or creatures I didnt include because we dont have all day, apologies to the Big Bongo fans. I also realize the definitions of impactful or meaningful can vary and depending on context mean different things to different people.

SEASON ONE took a while to get going as far as significant deaths are concerned. Sure, we had lots of Imperial Troopers going down at the hands of our blood thirsty rebels, but it would take 13 episodes to get the series first impactful slaying. And of course, it would come at the hands at perhaps the most prolific murderer in Star Wars history, Grand Moff Tarkin.

When things werent going well on Lothal and a rebel cell was causing problems for the local magistrates, Tarkin arrived on the scene to restore order. One of the first things he did was order the execution of Commandant Aresko and Taskmaster Grint for what he called incompetence. This was carried out at the hands of the Grand Inquisitor. It turns out in the same episode Ezras parents, Ephraim and Mira, are killed off camera leading an escape at the Imperial prison on Lothal. 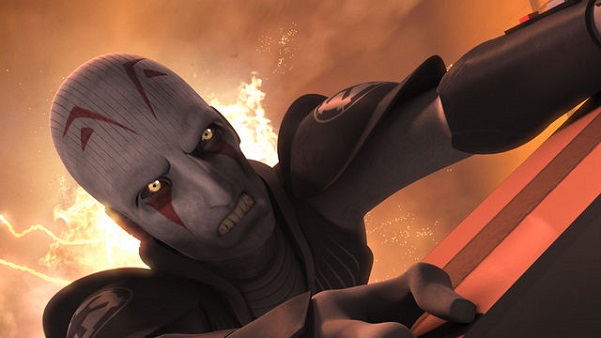 Just a couple of episodes later, called Fire across the Galaxy, we get a fiery encounter between Kanan and the same Grand Inquisitor. Kanan gets the upper hand on the Inquisitor who falls to his death rather than die at the hands of Kanans lightsaber, but not before delivering an ominous message, there are some things far more frightening then death.

So, the first season was short on deaths but the few that did occur were very impactful and would help set the tone for the show going forward. Things got off to a much quicker start in SEASON TWO as in the very first episode, Minister Maketh Tuas escape shuttle blew up while attempting to flee Lothal. She was attempting escape rather than attending a meeting with Darth Vader and where she had to answer for her failure to locate and quell the rebel cell.

There would be a lull in the significant bloodshed but by the end of the season in Episode 21 called Twilight of the Apprentice, we would lose three significant characters. The Inquisitors were Force sensitive Jedi hunters essentially who have been causing trouble for the Rebels since the beginning of the show. Trained in the ways of the Dark side by Darth Vader they were dangerous enemies to the Rebellion, until this episode that is. 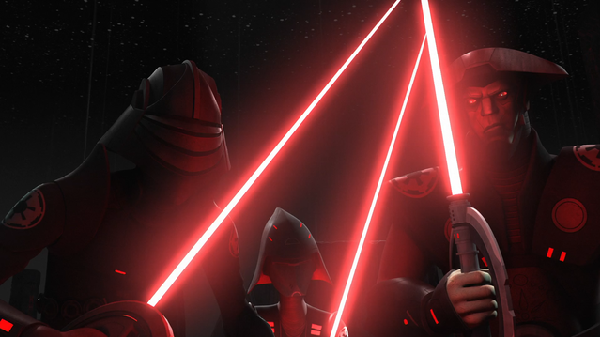 SEASON 3 would give us the most kills to date in the series; three of them in particular would have a lasting impact on not only the series in general but the Star Wars universe as a whole. And it was the events that occurred on Mandalore would have ramifications beyond the framework of this series.

In Episode 16, Legacy of Mandalore, with a full blown rebellion happening on the planet, Clan Wren including Ursa Wren, Sabines mother, had made a deal with Governor Gar Saxon to turn over the Jedi, in return for their loyalty and Sabines life. 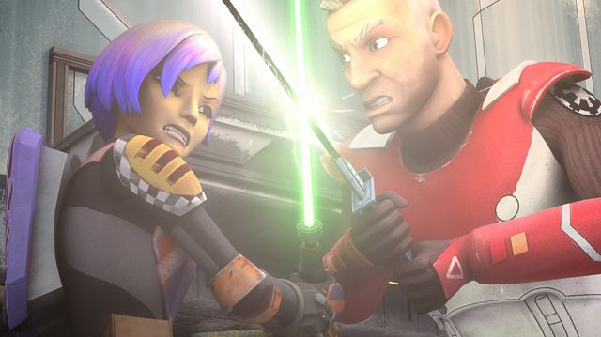 When Saxon, who never intended on keeping his word, turned the tables, he and Sabine engaged in a battle to the death. After Sabine emerged the victor, she decided to spare his life and walked away which was against Mandalorian custom. With her back turned to him Gar pulled out a blaster to shoot her in the back but Ursa Wren shot Gar in the heart instead, killing him.

One of the most profound deaths would be next as former Sith Apprentice Maul tracked Obi-Wan Kenobi to Tatooine with the help of a trusting Ezra Bridger. The two long-time enemies faced each other one last time with Kenobi besting Maul and slashing him with his lightsaber, killing him. This would be Kenobis first and only actual appearance in Star Wars Rebels outside of Holocron images.

The season ended with a tremendous 2-part story with Part One of Zero Hour happening on Atollon when Thrawn learned the location of the Rebel base. Hoping to get just one ship through the blockade, which was flown by Ezra, and get reinforcements, the Rebels attacked looking to destroy an Imperial interdictor, creating a hole. With things looking grim and the Rebels getting desperate, Commander Sato chose to sacrifice himself and crashed his ship into Admiral Konstantines interdictor, killing the both of them the process. It was a true heros death.

Even though this current, and last, season is only halfway done weve had a handful of impactful deaths to date. A rather major one from SEASON FOUR so far is that of Tiber Saxon. Tiber is the brother of the late Gar Saxon, which we just spoke about, and assumed the role Governor of Mandalore in his brothers absence. In the second episode, Heroes of Mandalore: Part 2 Saxon was losing his grip on the region and was under attack from Sabine Wren and the other clans in Sundari. 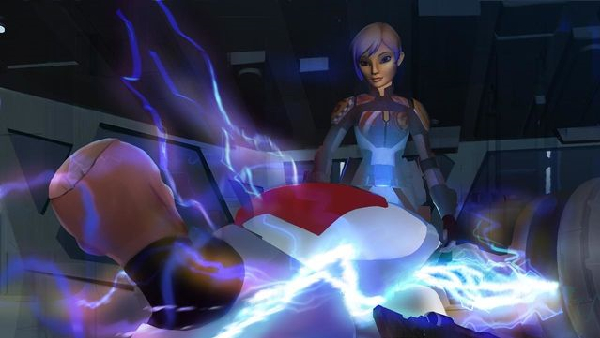 When his plan backfired and his own weapon was turned against him, Sabine struck its core with the Darksaber making it unstable. The resulting explosion destroyed the Star Destroyer and Tiber Saxon along with it.

The very next episode, In the Name of the Rebellion: Part 1 we had another group death scene only this time it was at the hands of Saw Gerrera. When Saw went to Jalindi to rescue Ezra, Sabine and Chopper from an Imperial Relay Station, he dropped photon bombs on the relay dish destroying it. The indictor, captained by Commander Brom Titus and without its deflector shields, was too close to the explosion and blew up killing everyone on board.

Finally, in the last episode before the mid-season break, we had an important death thanks to now General Hera Syndulla. In the episode Rebel Assault, Hera was leading an attack against an Imperial blockade attempting to get to the Lothal surface. Thrawn, who was commanding the blockade, launched a squadron of Ties including the prototype Tie Defender Elite piloted by his best, Captain Vult Skerris.

In the ensuing dog fight Thrawn had ordered Skerris to back off pursuit of Syndulla but Skerris wouldnt have it, sensing victory. Thrawn would fire at both ships instead causing their shields to go down. Hera was able to out fly Skerris and eventually destroy him.

So there you have it, a few of the more significant deaths that have occurred so far in the series. There have been more but these are the likely the biggest ones that have happened and again, Ahsoka Tano is likely dead but that hasnt been verified yet so for now shell have to remain on the non-dead list.
Who, if anybody, will survive the remainder of this final season well have to wait and see. Whether this list gets longer or not is something only time will tell.

Jedi Council Forums
* Star Wars Quote Game: PORG Edition!
* RYL - PT Social Thread: We don't want to buy death sticks
* Give The Above User A Sith Title [Version 3.0]
* Give the above user a Mandalorian Title
* The Oyu'baat cafe, BETA version: About as Five Star as you get on Mandalore
* Five Words Per Post Story Thread
* Star Wars Quote Game (version 5.0)
* The Seeking
* Pandemics in the Age of Globalization: Coronavirus (COVID-19) Discussion
* My Dark Twisted Presidential Campaign: The 2020 U.S. Presidential Election