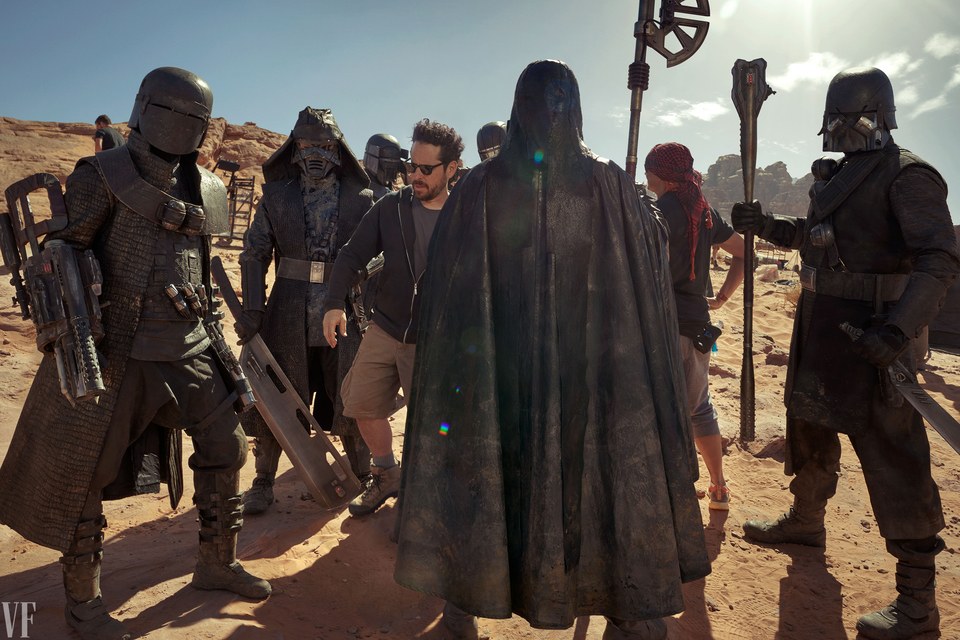 Return Of The Knights Of Ren

Vanity Fair has another article up covering the Knights of Ren. Known only from flashback sequences in previous movies, the Knights of Ren are more of a mystery than anything. Star Wars: The Rise of Skywalker will change that as we will be seeing more of Kylo's bad boy club in action.

Not seen since their rain-soaked introduction in The Force Awakens, the Knights of Ren have long been rumored to appear once again in Star Wars with Decembers trilogy-capper The Rise of Skywalker. In this exclusive online extra from Annie Leibovitzs new portfolio from the set of Star Wars: The Rise of Skywalker, the mysterious black-garbed bad guys are, indeed, back to cause more trouble in a galaxy far, far away, and perhaps shed some light on whether theres hope yet for Kylo Ren.

The Knights of Ren are masked warriors with specialized weaponry who add an element of chaos to the war between the Resistance and the First Order. We first saw them when Daisy Ridleys Rey touches Lukes lightsaber in The Force Awakens and plunges, suddenly, into a vision. Six of the knights briefly appear on a rainy, unidentified planet surrounded by slaughtered bodies, seemingly led by Adam Drivers Kylo Ren, as his familiar red lightsaber slices through an unknown clan leader. But since The Force Awakens, no additional backstory has surfaced about the identities of these knights, their true number, and the part they played in Ben Solos transformation into Kylo Ren.

Two other figures appear in Reys Force Awakens vision, just before Kylo and the knights: a hooded Luke Skywalker (Mark Hamill) and the droid R2-D2 huddled against a shower of sparks. The implication is that Lukes dismay and Kylos rampage are all connected by the fiery destruction of a Jedi temple that sent Luke into hiding long before the events of the new trilogy.

In the first flashback narrated by Luke in The Last Jedi, Ben Solo leaves his uncle for dead in the ruins. Luke tells Rey: The temple was burning. He had vanished with a handful of my students . . . and slaughtered the rest. Its possible that the handful of Lukes Padawan learners that followed Ben Solo to the Dark Side grew into seeing themselves as disciples of the dark Ben Solo: the Knights of Ren.

Having only ever seen them at night and in the rain, its a bit of a shock to see the knights in all their brutish glory in the glaring Jordan sun of the Star Wars shoot for Vanity Fair. Their oversize, vicious-looking arsenal and mismatched armor sets them apart from the sleek, coordinated looks of the First Order bad guys and the elegant weaponry of the Jedi. Their D.I.Y. lookincluding one especially lethal-looking gun armwould be equally at home in one of the Mad Max movies.

In the first trailer for The Rise of Skywalker, we see Kylo Ren mowing through the knights with his lightsaber. Is this a flashback to a previous falling-out? Evidence of new dissent among the ranks? Or is it, as many hope, evidence that Kylo will turn on the bad influences in his life and join Rey in the light? Well find out when The Rise of Skywalker opens in theaters December 20.