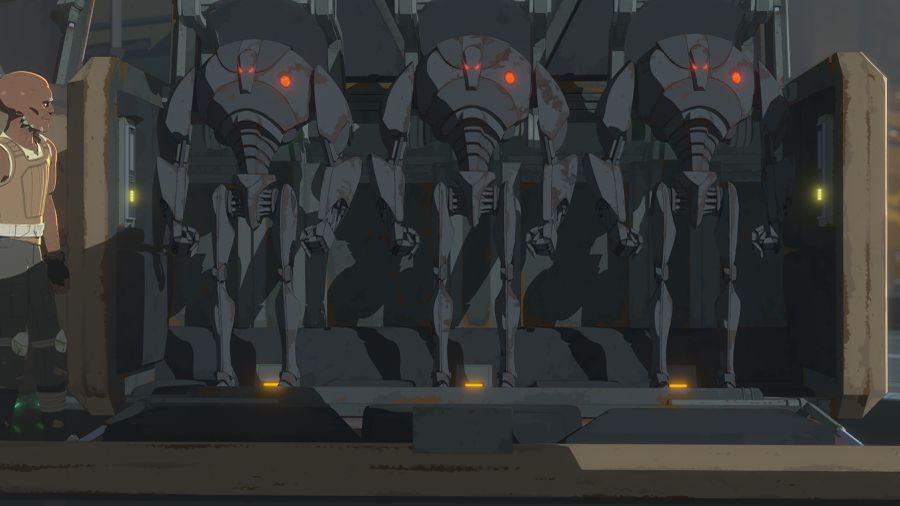 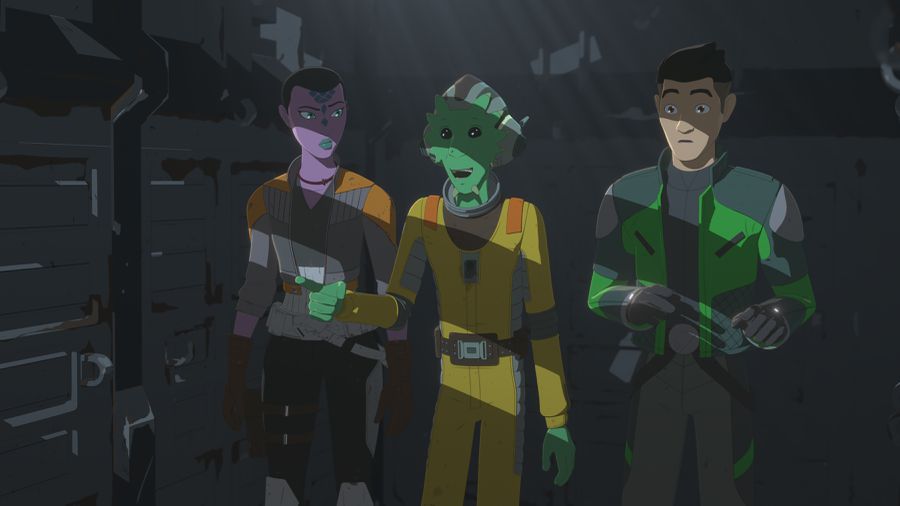 Were really getting down to the final few episodes now and as expected, the show is starting to tidy up a few things. Theres LOTS of characters on this show, for good and bad, and figuring out where they end up is a to-do list that just needs to happen, pleasant or not.

As I mentioned last week, the Sidon Ithano reference in The Rise of Skywalker Visual Dictionary predicted what would happen in this episode. And they dont waste any time as the episode starts off with Kragan and his pirates meeting up with Sidon at an unknown location for a little business transaction.

After a bit of failed small talk with the prickly Sidon, they unload the merchandise which is a whole bunch of B2 Super Battle Droids! They are of course old and beat up, but Kragan says theyre perfect for what he has in mind, which is to take over the Colossus! They pay the Crimson Corsair and thats that.

A quick pause if you will. In the TROS visual dictionary, on page 183, in the Sidon Ithano profile, it says He has recently made a substantial sale of a cache of vintage super battle droids to Kragan Gorr So, if you read that prior to seeing this episode, which happens to be called The Mutiny, well, one plus one. Its a very minor but cool connection to the larger picture, namely, how this show tracks against the events in Episode IX.

Since this all happens in opening two minutes of the episode, its not what Kragan is up to thats important, but whether hell be able to pull it off or not. Back on the station, Synara San and Captain Doza are discussing the pirates; with Synara thinking its best if Doza allows them to leave. For his part, he thinks its wise to keep them on the station, where he can keep an eye on them.

Doza heeds her warning however and heads to the hangar anyways with a security contingent in tow. He searches all the crates for illegal contraband but missed finding the B2s because Kragan sneakily hid them just outside of the hangar prior to Dozas arrival.

Before Dozas arrival, Synara was there trying to find out what Kragan was up to, but hes clearly keeping her out of the loop and sends her on a fools errand. Before Synara leaves, she tells him whatever is going on; she wants no part of it. The cracks are showing.

Back in Dozas office, he and Yeager are talking to Neeku about a special assignment they have for him. Since the pirates dont suspect Neeku of anything distrustful, and with his affinity towards their way of life, Neeku is tasked with keeping an eye on them, up close.

Kaz shows up, wanting to know what Neekus special assignment is all about, but Yeager tells him not to worry about it and go work on the Fireball instead. This only raises his suspicion since Neeku is the better mechanic. So, Kaz follows Neeku which leads them both to the hangar, where the pirates are still hanging out, unpacking their battle droids.

The pirates start off by giving Neeku a hard time for being there but Kragan steps in. He leans on Neekus romantic notion of pirates, asking him to help repair the B2s who are in rough shape. It seems Sidon sold Kragan a bunch of lemons and he needs Neeku to make them operational. He tells Neeku the battle droids are a gift to Doza and the Colossus, to help fight the First Order and maintain security. Under that premise, Neeku agrees to help. 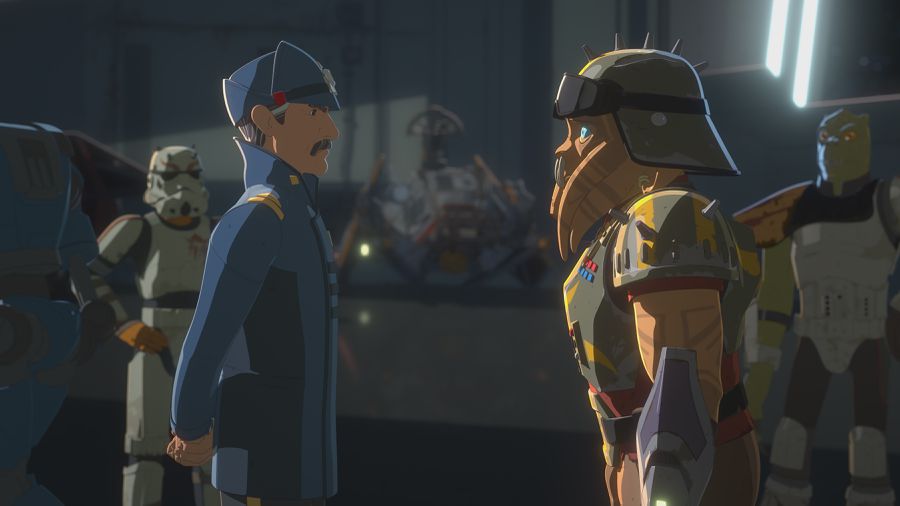 They begin opening all the containers revealing more and more B2s, and then a B1 battle droid pops out! It seems one of the old B1 Battle Droids got mixed in with the B2s, a stowaway of sorts. Yes, our good old friend Roger is back, sort of, and Neeku warms to him immediately, taking him on as his assistant.

So, Neeku gets the B2s operational in quick order and while hes working on B1, Kragan busts in and throws Neeku in a loading crate, he doesnt want him spoiling the mutiny. Neeku was still modifying the B1 at the time, for something specific, but Kragan wasnt having any of it.

Meanwhile, Kaz and Synara are in Aunt Zs playing holo-darts, theyre discussing how everyone is acting strangely and they decide to investigate. They arrive to overhear Kragans plans and find Neeku trapped in the loading crate. Before they can tell Doza everything, a B2 appears behind them and locks them in the crate along with Neeku.

Kragan and the pirates, along with the Super Battle Droids, launch their attack on the station, making their way through the passageways, destroying security droids. We see them in Aunt Zs, in Engineering with the Chelidae, they even make their way to the Aces Lounge where the Aces are hanging out.

Still in the crate, Neeku tells Kaz and Synara not to worry. Just then, the door is opened by the B1 who has been programmed by Neeku to help. This was part of Neekus plan from earlier, when he was working on the B1; suspecting Kragan was up to no good from the start.

Kragan and his gang make it to the tower and then into Dozas office where they destroy the remainder of the security droids, and seriously damage 4D. With the mutiny nearly complete, things arent looking good for Doza and the rest of the station.

Synara, Kaz, Neeku, and the B1 are making their way to the tower and run into some pirates. They are held up by Drell and Valik but manage to take them out thanks to Neeku and a wrench. They continue to the tower but with the lifts out, they have to climb. They arrive to find the place empty because, as it turns out, Kragan took Yeager and Doza hostage, bringing them to the hangar. He intends for them to take the long walk into space or, walk the plank if you will. He is a pirate after all.

At the last moment, Synara and the rest interrupt their little ceremony and Kragan accuses them of trying to mutiny his mutiny He orders the B2s to surround them but good ole Neeku has one more trick up his sleeve. Turns out, one of the modifications he made earlier to B1 was to make him the commander of the super battle droids, and they must obey his every word. He orders them all to stand down and imprison all the pirates. Being outmatched and outnumbered, Kragan and remaining Warbirds have no choice but to surrender.

Doza orders them to the brig, while he thinks over their punishment. Synara tells him that keeping Kragan and the Warbirds as prisoners will only use up valuable resources, and that letting them leave is a better option. She suggests making a deal with Kragan, his freedom in exchange for a guarantee that the pirates can never return. Doza agrees and the pirates are stripped of all their weapons and the Galleons hyperdrive is disabled.

Before leaving, Kragan chides Synara for betraying him, after all, he saved her when she was child and raised her like his daughter. Shes not falling for his histrionics and tells him her debt is paid, insinuating hes free to go because of her.

Afterwards, Doza acknowledges how hard that must have been and Synara is finally part of the Colossus family. Yeager tells Neeku hes one of the best spies hes every seen right in front of Kaz, who of course, gets offended. Neeku tells him he learned everything he knows about spying from him, especially acting clumsy, naïve, inept, and uncertain. 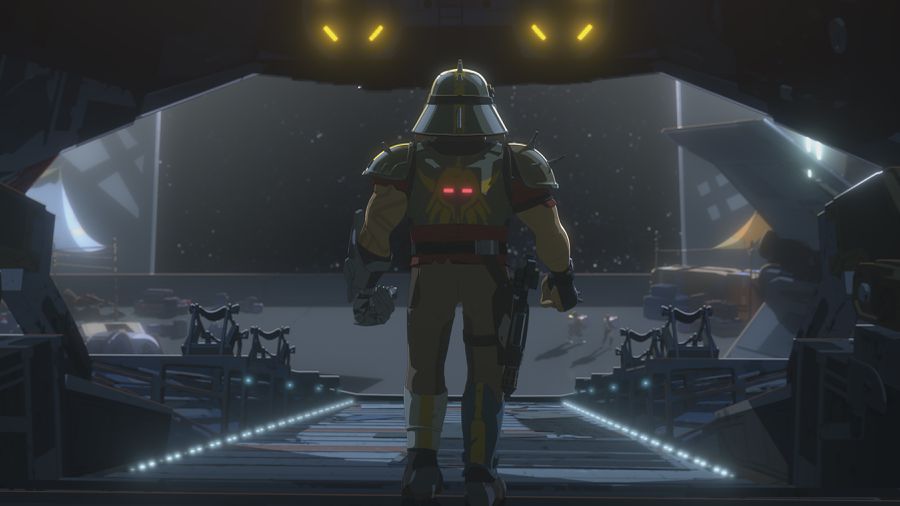 Great episode from start to finish, and it was really great seeing the show still willing to give us a different look this late in the game. Have to give some kudos to writer Mairghread Scott (Live Fire) for doing just that, great job.

Having the Crimson Corsair himself, Sidon Ithano making a pre-TROS appearance was really cool considering we know whats coming. And having battle droids show up was really great and is something the show has done well from the outset, connect to the past.

The biggest issue resolved here involved Synara and whether or not she would ultimately choose the Colossus family over her adoptive Warbird one. Im glad to say that Synara San is finally and officially part of the Colossus family.

Having the pirates on board was problematic from the start, but it was a device to get Synara on board the station for good. The writing was on the wall from her very first appearance, way back in Season One, that the pirates life wasnt for her anymore.

So, the pirates are out of the picture, but for how long? With only a few episodes left and many more boxes to check, having them return would only seem problematic at this point. I do have to say, Ill miss them a little bit.

And, because of Neekus clever thinking, the station does now indeed have a B2 security team, just as Kragan offered! Obviously thats not what he had in mind when he purchased them from Sidon Ithano but hey, thats the way it goes some times.

Speaking of, how great was it to hear Matthew Woods voice again, behind a B1 Battle Droid? He will forever be R0-GR aka Roger to me but seeing a B1 in this style of animation was a real treat. Hopefully we get more of him before the series is over.

Its occurs to me that perhaps the reason I liked this episode so much was that Kaz had very little to do with its progression or outcome. Listen, by his very nature, can wear on you and weve had a LOT of Kaz this season. Its fair, hes the lead, but it was nice to have a little break from what will be a very Kaz-centric ending Im sure.

Next week weve got The New World

Doza takes the Colossus to a hidden world on the outer rim, only to find its inhabited by beings who dont like them.

I feel like theyre showing us potential planets for our friends to call home after all this is over with episodes like this. I mean, its pretty bold to introduce new characters this late so Im inclined to think that some of the cast will be left behind, for their own well-being.

Like I said, theyre entering clean-up mode and will have to provide some level of closure as to where these characters end up. Theres simply too many to just leave us hanging.

And theres still the Tam issue to deal with, on top of everything else, which also includes the probable demise of Pyre and Tierny. Well find out soon enough I suppose!