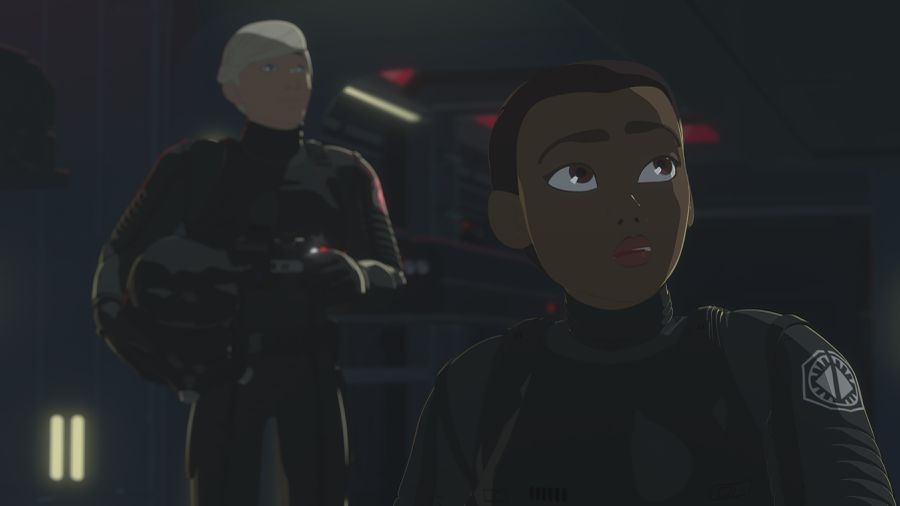 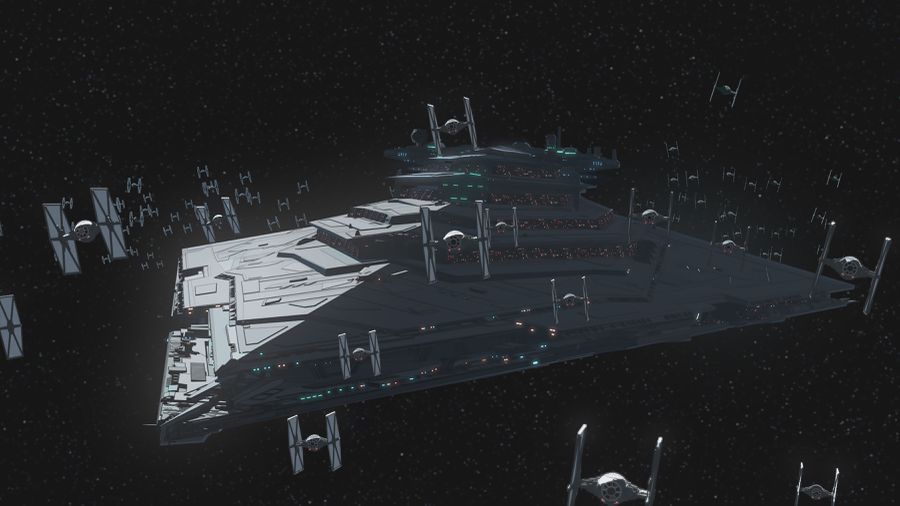 Television history is full of hits and misses when it comes to finales, its not an easy thing to do after all, wrapping up a series. Providing a sense of closure for the audience, with the understanding that for these characters, life goes on whether were watching or not. Rarely do they get it right and you can point to only a handful of shows that have managed to craft the perfect swan song.

In that regard, the finale of Star Wars Resistance more or less leaves the heavy lifting to us. And as youre cautiously watching the tracker at the bottom of the screen, it becomes painfully clear as precious seconds tick away, theyre not going to stick the landing, not the one you may want anyways.

Thats the bad news, if you can call it that; the good news is that while it may have left me only 99% satisfied, it simultaneously delivered one of the best episodes this show has produced over two seasons. And while I cant deny that the ending left me feeling a little unfulfilled, the truth is it has more to do with me and my idiosyncrasies than the actual finale.

The episode itself is relatively straightforward, as Tams finally had enough of the First Order shtick and her face-turn is coming full circle. She sends a message to Kaz who, along with Yeager and CB-23, goes on a bit of rescue mission.

Things get complicated when the First Order wises up and its up to Captain Doza and the Colossus to finally put up or shut up. With everything on the line, they enter into one last battle near Castilon Prime and this time, the station doesnt flee, it fights, and it wins.

So, with their Star Destroyer decimated courtesy of Jade Squadron and the Aces, Commander Pyre and Agent Tierny have become casualties of war, neither likely to be remembered by the First Order brass, nor forgotten anytime soon by Tam and the Colossus.

And as our heroes enjoy the spoils of war at Aunt Zs; celebrating their somewhat trivial victory, it just ends. No hoopla, no destination, nowhere to call home, no call to action on Exogol, nothing. Tam doesnt even change out of her First Order pilot uniform.

This community of drifters is very much in the same place the season started, with nowhere to call home and no real path forward. So, this is where we get to play the assumption game.

As far as where they end up, the appearance of Aeos Prime the last few episodes and Dozas affinity towards it could come into play. They get along with well with the Aeosian Queen and could use the opportunity to help repair the damage left by the First Order.

Or how about returning to Castilon? The reason they left in the first place has now become extinct and they are right there. It was the stations home for a very long time and is where the Chelidae are from so it makes sense to go back. Both planets are water planets located in the Outer Rim so either one would do nicely.

So if thats the where then what about the when? With no mention of an exact moment in the timeline per se, all we know is that the second season begins after The Last Jedi and ends before The Rise of Skywalker. Now, speaking with Executive Producer Brandon Auman, he told us it takes place roughly three months prior to the start of TROS, and we all know what happened there. Plus, Supreme Leader Kylo Ren isnt especially preoccupied by the looks of things so he hasnt booked a flight to Mustafar yet.

Lucasfilm Special Effects Supervisor Neil Scanlon let it be known that the Fireball was among the crowded field of ships at Exogol during the final battle. And just recently we learned that Torras Blue Ace and Yeagers ship was also among the 14,000 ships assembled, but NOT the Colossus.

So, at some point after the finale, Kazuda and some others did rejoin the larger Resistance but the particulars of how and when have yet to be revealed. Were they simply enjoying a bit of quiet time when the call came in from Lando and Chewie, looking for help?

Personally, this is something I would have liked to have seen included, some indication that once they slept off their hangovers, they were making plans to join the fleet. But I can also envision that happening just as easily, so again, the issue is mine, not the writers.

Hugh Sion and Norath Kev are active members of the Resistance so its doubtful they would shuck their duties, and if this show proves anything, theres enough First Order to go around. In that vein, the station could be used as a staging point for less consequential missions or simple errands until the final battle takes hold. 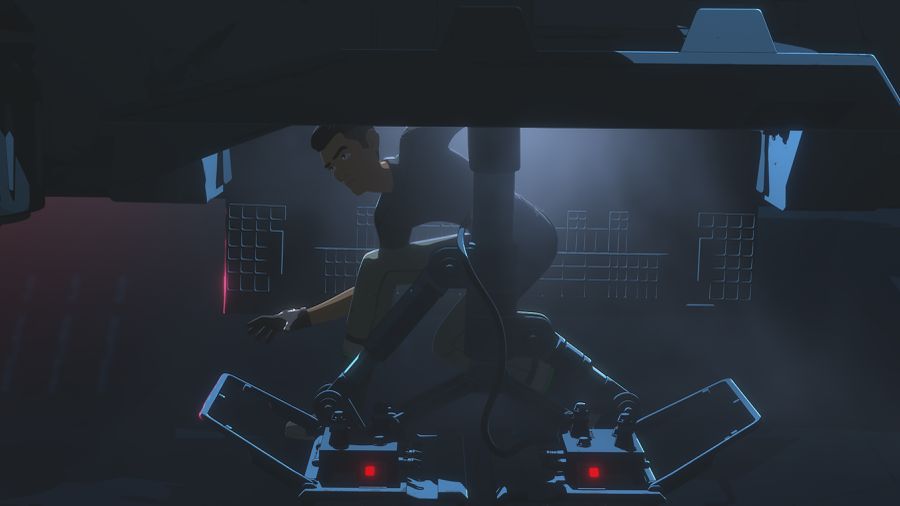 What about Venisa Doza and Kazuda? I got the strong impression Venisa was very happy to be back with Imanuel and Torra but shes a dedicated and strong leader, it seems unlikely, so close to the end, she would go AWOL. And if the last few weeks showed us anything, its that Kaz isnt willing to sit on the sidelines for too long, fighters fight, and hes a fighter.

For the benefit of us and convenient to the show, the war came to him, but now that the immediate threat has been culled, will he rush off and join up with the Resistance full-time? Or did he and the others wait for the call to arms?

Whatever happens to them over the next few months is somewhat irrelevant, considering what lies ahead for both the Resistance and First Order; the war is coming to an end. But such as before, there are always things to do post-war and whether its called the New Republic Navy or something else, Kaz and the other pilots will be flying somewhere.

Tams arc, which was the predominant one this season, came full circle in a mostly satisfying and emotional way. Any ill-will Yeager or the station had towards her was quickly erased when the First Order came a calling. These moments, where Tam got to look Tierny in the eye as an equal and tell her whats what, were fantastic.

Saving Tams about face to the very end, amidst a mini-war, left little time for reconciliation but its clear she was happy to back amongst family and friends. Theres zero chance she runs off and joins the Resistance, now that shes back with Yeager, Neeku, and Bucket. Suzie McGrath was excellent in the role and stood out for me as the series most consistent and best performer, this was true for the finale as well.

As for the rest of the stations residents, things will go back to normal once theyve decided where to park the Colossus. It was home to many before including Z'Vk'Thkrkza (Aunt Z), Glitch, Jooks, Al, etc., and it remains that way, so finding a safe and prosperous place to park will be important.

And as for asylum seekers Synara San, Kel, Eila, Mika Gray, etc., they will have to decide if Colossus is just a temporary home or someplace more permanent. They seem pretty comfortable to me so Id imagine theyre staying put for now. Many of them have nowhere else to go and there was no indication by the finales end they were headed elsewhere so.

The predominantly original series has done a great job of introducing new characters throughout the two seasons.
Although, with an already bloated cast, giving us new ones late into Season 2 seemed like an odd choice. Especially at the expense of some series regulars who disappeared for episodes at a time this season.

But, they were all present in the finale in a clever way, defending their home from the First Order, each one getting a little nod, wink, or heroic moment to remind us theyre still around. The Aces never really went away but fan favorites such as Opeepit, Flix, Orka, and the like all got a brief moment in the sun in the end after brief appearances this season.

This finale, and season, has been very much operating apart from the two films that flank it. Other than a quick visit to DQar, an unimportant Hux pop-in, and the Kylo Ren appearance at the very end, its mostly been its own animal. This narrative approach, which Star Wars Rebels also employed, freed up the writing staff to do its own thing without having to connect directly to TROS.

Thus, raising another important fact, this finale was produced around the same time or just prior to the completion of the TROS. And we have heard the film underwent several changes, particularly the end, so there just wasnt any tangible way to line up the two, they simply ran out of time to do so. The closing moments of this finale probably reflect that reality more than any other.

And like Rebels, this series gave us just a chapter in the war, a mere footnote in the galactic battle raging between the Resistance and the First Order. This much was obvious in Season One when Poe Dameron cut the cord between him and Kazuda because he had more important things to take care of. Turns out taking BB-8 from Kaz and leaving behind CB-23 was more symbolic than we had realized. Not that it was a bad exchange, as CB-23 quickly became their most valuable asset.

Besides having the flashier names (Ahsoka, Vader, Sidious, Maul) Rebels also benefited from receiving a generous placement in the timeline. Starting off where this show did, around the start of The Force Awakens, was more of a hindrance than anything else. The writing was on the wall and they simply werent allowed to go any further than they did. So in that sense, they made the most of the time they were given.

And while Rebels was flying face-first into history, Resistance was creating it, and that is why any shortcomings you may find with the final few seconds of the show must be forgiven.

The future for our Colossus friends has yet to be written.