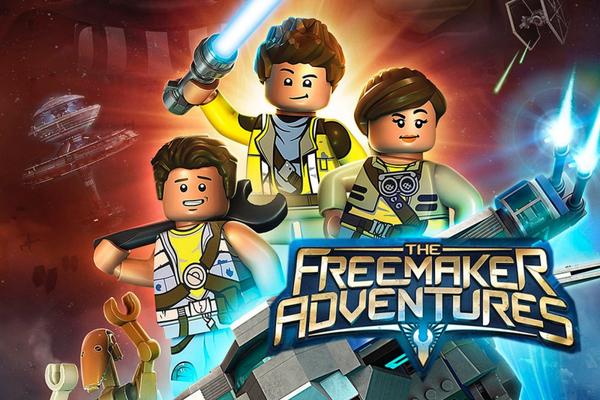 LEGO Star Wars: The Freemaker Adventures is set between the events of The Empire Strikes Back and Return of the Jedi, the action comedy series follows the Freemakers, a family of sibling scavengers who operate a salvage and repair shop in space, and features Star Wars heroes and villains from across the saga.

Episode 1: A Hero Discovered
Episode 2: The Mines of Garballa
Episode 3: Zander's Joyride
Episode 4: The Lost Treasure of Cloud City
Episode 5: Peril on Kashyyyk
Episode 6: Crossing Paths
Episode 7: Race on Tatooine
Episode 8: The Test
Episode 9: The Kyber Saber Crystal Chase
Episode 10: The Maker of Zoh
Episode 11: Showdown on Hoth
Episode 12: Duel of Destiny
Episode 13: Return of the Kyber Saber
If you haven't had a chance to see The Freemakers, you can watch all 13 episodes from season 1 right here!

Following the destruction of the Death Star, Darth Vader and Emperor Palpatine set out to recover the hidden crystals of an ancient weapon known as the Kyber Saber. Meanwhile, a family of salvagers and shipmakers known as the Freemakers, encounter a mysterous Jedi and embark on a quest to find the crystals and reconstruct the Kyber Saber before the evil Empire does.

THE MINES OF GRABALLA - Season 1 Episode 02

When brash Rowan heads off to find a Kyber Saber Crystal by himself, he meets the fearsome gangster Graballa the Hutt, and learns the limits of his own powers and skills.

When Zander's impulsive joyride in a Naboo Starfighter gets him arrested by the Empire, Kordi, Rowan, and Naare have to free him from the clutches of Darth Vader.

LANDO CALRISSIAN hires the FREEMAKERS to retrieve some "precious cargo" from Imperial-controlled Cloud City. What the Freemakers don't know is DENGAR, RAAM, and BAASH are also hunting for this cargo, as is NAARE, who mistakenly suspects the Freemakers are on the scent of a Kyber Saber Crystal they won't share with her. When Rowan accidentally gets frozen in carbonite, Dengar takes both frozen Rowan and the cargo and flees into the winding halls of Cloud City. Chaos and confusion reign and matters only get worse when desperate Zander cuts the power to the Repulsorlift Generator. Cloud City plummets through the atmosphere and the only person who can stop it... is frozen in carbonite!

A mission to retrieve some precious carved wood leads the FREEMAKERS to Kashyyyk where they enter into a deal with CHIEF ATTIBURRA. Unfortunately, penny-pinching KORDI uses ROWAN as her translator and some of the deal's details get lost in translation - Namely, that the Freemakers have agreed to rescue Attiburra's child from an Imperial Prison. You don't back out of a deal with a Wookiee and keep your arms, so the Freemakers are forced to stage a daring prison break. And they almost pull it off... until Rowan feels the presence of a Kyber Saber Crystal!

With the Empire hot on their trail, LUKE SKYWALKER and PRINCESS LEIA ORGANA make an emergency landing at Freemaker Savage and Repair. KORDI doesn't want to get involved in their fight for freedom, but when ROGER accidentally launches himself, Luke, and ROWAN into hyperspace, Kordi doesn't have much choice. Kordi and Leia stay one step ahead of the Empire, while Luke and Rowan attempt to repair their ship. Luke teaches Rowan some valuable lessons about the Force and Leia demonstrates to Kordi how selfless the Rebellion is by jeopardizing her own safety to help her new friend.

When ZANDER lands the team a job as a pod racer pit-crew, it seems like a dream come true. But the dream turns to a nightmare when the FREEMAKERS learn the whole gig is GRABALLA THE HUTT's elaborate trap to capture ROWAN! The Freemakers barely escape in a pod-racer and wind up trapped in the desert, surrounded by the Hutt's forces. They make a desperate transmission to Naare for help. But when she comes to their rescue, Rowan makes a startling discovery...

The FREEMAKERS finally know the truth about NAARE! But in their desperate attempt to flee the Sith Agent, their ship is damaged. They wind up stranded on Takodana, where they meet MAZ KANATA and find work from notorious pirate, HONDO OHNAKA. Hondo gives the family a simple task: Bring him three "Golden Orbs" from a nearby moon. But there's more to this task than meets the eye - The orbs turn out to be VARACTYL eggs! The Freemakers must face an angry herd of Varactyls... and Rowan is forced into a test of his character.

The Freemakers have a mystery to solve: Every time they find a Kyber Saber Crystal, Naare snatches it away from them. First, she takes the Crystal given to them by Maz. Then on the water world of Ningoth, the Sith denies them victory again. Finally on Naboo, the Freemakers find one of the Crystals only to wind up in yet another fight with Naare, who is perpetually one step ahead of them. How is Naare doing it???

The desperate FREEMAKERS head to the deserted garbage planet of Zoh to look for the legendary "Maker" who they believe can help Rowan hone his Force powers. After a brief skirmish with some territorial repurposed DROIDS, the Freemakers find the Maker who turns out to be none other than JEK-14! It takes some convincing, but eventually Jek agrees to teach Rowan all he knows. But trouble looms -- While Jek teaches Rowan to build with the Force, one of his droids, N-3R0 fears the Freemakers will ruin this droid paradise. He leads a revolt against the Maker, with the Freemakers trapped in between!

The FREEMAKERS journey to Hoth to search for the last Kyber Saber Crystal. There they encounter NAARE, WAMPAS, even PLUMESTRIKER and DURPIN. They find the last Crystal, but escaping the planet proves difficult. After a huge battle in which the Freemakers use repurposed vehicles and weapons from the Battle of Hoth, Rowan gives up and gives Naare the "Crystal"... which turns out to be just a piece of ice. Before Naare realizes she's been tricked, the Freemakers jump to Hyperspace, taking the Crystal with them.

With the last Kyber Saber Crystal in his possession, ROWAN has gone into hiding. No one, not NAARE or even his siblings, know where he is. But Naare desperately needs that Crystal so she devises a nefarious plan to lure Rowan out of hiding - She captures KORDI and ZANDER and uses them as bait to flush Rowan out. Master and pupil have a huge lightsaber fight in Freemaker Salvage and Repair... that ends with Rowan's defeat.

Things are grim - NAARE is racing off to retrieve the last Kyber Saber Crystal and the FREEMAKERS have no way to stop her... until Rowan channels his Force Powers and rebuilds the destroyed StarScavenger. The Freemakers then race off to Coruscant where their plan is to intercept the Kyber Saber before it ever reaches the EMPEROR'S hands. Their scheme, which features Rowan posing as the Emperor, almost succeeds... before it falls to pieces. Rowan is exposed and a three way fight between Rowan, Naare, and the Emperor himself breaks out for the possession of the most powerful weapon in the galaxy, the Kyber Saber!