The Designers Of Solo: A Star Wars Story

With the release of Solo: A Star Wars Story, much has been made of the look and style of both the new and classic characters we see in the film. Certainly the clothing choices of characters such as Lando Calrissian, QiRa and Dryden Vos say more about their disposition and character traits than even the words on the page do. Theres no question the autobiographical context you can draw from the look some of these characters employ is rich whether it represents their culture, the planet theyre from or the profession theyve chosen.

Star Wars often dresses timeless and no one captures that indiscriminate motif better than Costume Designer David Crossman and Artist/Costume Designer Glyn Dillon. Crossman and Dillon, having already worked on The Force Awakens and Rogue One together, have teamed up once again to design and produce the amazing costumes we see in Solo: A Star Wars Story.

Both have been in the business for twenty years now and their portfolios and resumes are very impressive, even without Star Wars under their belts. We managed to snag a few minutes with the two of them during a very busy marketing tour. Enjoy! 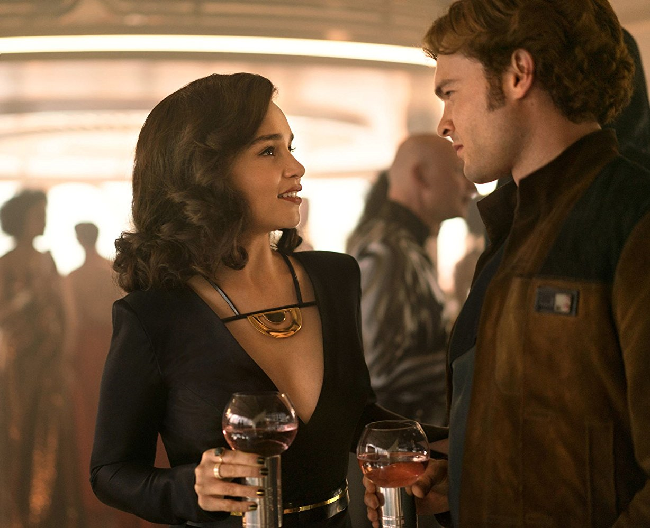 When it comes to designing, are you able to do it objectively or is it preferred to have casting choices before you get too far into the process?

Glyn - Its always helpful you always have some idea of whod you like to bring along before casting because a lot of the times casting doesnt happen literally days before you shoot. It definitely helps having a person in mind when youre coming up with ideas.

Dave - Often the director will want to see early on your thoughts on a character way, way before theyve even worked out whos going to be casted. So, we did stuff on Lando long before its decided whos playing him.

Star Wars has a timelessness quality to it where it doesnt necessarily fit into a time period, especially with fashion. Does that make it harder or easier?

Dave - We sometimes liken it to doing a period film in a way. Because there are certain things that you dont have to obey, but you have to adhere to certain things to keep the asset looking like Star Wars. Prevent it from wandering off and looking like a completely modern film. 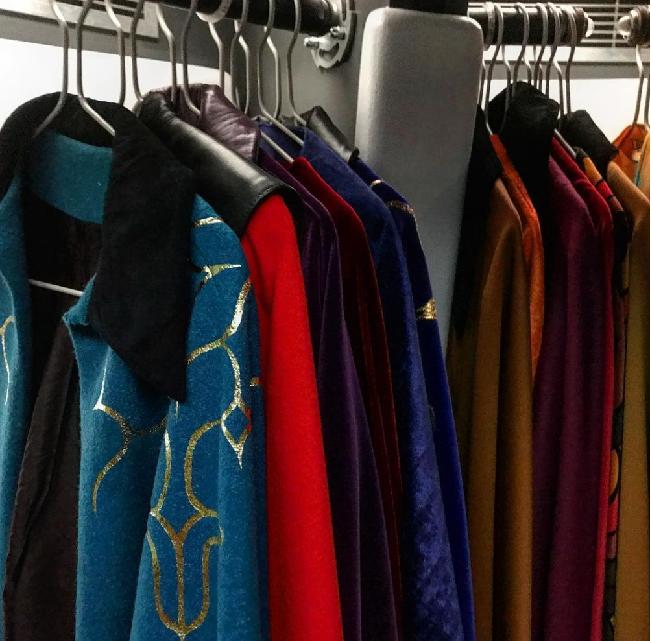 I have to ask about Landos cape closet which was fantastic...

Glyn - We made approximately 35 capes. Our main objective at the time was to make it as luxurious and elegant and kind of swanky as possible. Show off as much color and texture, fur and leather as possible. They were all made individually but we werent concentrating all our efforts on those since we based all our takes on his main cape.

Dave - We worked with a ton of nice palettes and would think about what kinds of colors Lando would wear. We thought a lot about adding some texture and some other patterns that we could add to the look of the closet. And then its all about just trying to get textures that would look good on camera so that if theyre standing in the closet and weve got 20 capes packed onto the rail youll be able to distinguish what they are rather look like a block of set dressings.

Can you talk a little about the inspiration behind QiRas costumes?

Glyn - We she was young and on the streets of Corellia, the inspiration was kind of, like a lot of the inspiration on this film we went to music for our inspiration and we went to a lot of 80s New Wave stuff. That feeling of she was wearing her boyfriends jacket, and it had to be a bit oversized and that cool street kind of a look. Then when it came to meeting Han again after all that time she had to be like the polar opposite. She was very sleek and very grown up, and a very film noir kind of stunning dress. And then when she was more kind of out in the field and fighting and running around, we kept that 40s shape by having the wide leg pants that were made in such a way that they kind of moved like cowboy chaps so that they feeling of the western inspiration.

Dave - But it still has the elements of chic even when shes paired down to her white suede jacket and wide leg trousers. Its still silk costumes and finer fabrics that kept that chic silhouette.

How much, if at all, did the change in directors affect your designing?

Glyn - There was a lot of stuff wed done before hand but I think Dryden himself was the main thing because the overall concept changed within the story. We kind of had to go back and rethink it with Ron because he was trying to re-plot him that was one of the main changes. But he was happy with most of what we had done, but yeah, Dryden saw the most changes.

Dave - The scheduling and reshoots created a new Dryden Vos in Paul Bettany, all under Ron Howard. That was very different because in the original one Michael Williams was going to be more of a type of creature, more of a Star Wars creature. So Paul Bettany came in and it was a very different thing as the story was changing. It was more or less a start over so.

There you have it! Short and sweet and these guys have been making the rounds so for more information on their process, it should be too hard to find.