Of the two, maybe three, big surprises in Solo: A Star Wars Story, the far and away winner was the huge appearance near the end of the film, revealing the true leader of the Crimson Dawn crime syndicate and that its somehow connected to Black Sun.

Turns out it wasnt Dryden Vos, which wasnt that hard to figure out since he alluded to it during the film a couple of times. No, the real leader of the Crimson Dawn was none other than the Dathomirian Zabrak and former Sith Lord, Maul!

Right, so your reaction to this scene wouldve been one of three likely. You were either very excited by this revelation, mildly exited depending on your level of affection for Maul or you were asking yourself, who the heck is that guy?

In the scene, QiRa has contacted Maul to inform him of Dryden Vos death; she lied of course telling him it was Tobias Beckett that did it, not her. They dont utter his name in the film, so you must go on pure facial and perhaps vocal recognition alone which, even if youre a casual Star Wars fan, the very least reaction should have been, its that guy from The Phantom Menace!

Whats also unique about this appearance and sticks out like a bright shining light, is that he ignites his new lightsaber, the one we see in Rebels, and he does so using the Force. These are the only two mentions or visual cues of Force abilities and lightsabers in the film. As someone else pointed out, up until this point, Solo was the only Star Wars film to date not to show a lightsaber or the Force. It was nearly a good bit of trivia.

To fully explain Mauls backstory would take too long, besides theres plenty of previous works and the internet to do that. Since this piece will assume you know who Maul is, I suggest you either continue reading or have a quick peak at some backstory because this piece will be taking some things for granted. But the single most important aspects to his appearance in Solo: A Star Wars Story is how it affects the timeline and canon.

As far as film and television goes, theres a big gap in the timeline where Mauls comings and goings arent depicted on screen. To date hes appeared in Star Wars Episode I: The Phantom Menace, Star Wars: The Clone and Star Wars Rebels. But, his affairs in between are known thanks to other source materials such as the Dark Horse comic books series, Darth Maul - Son of Dathomir written by Jeremy Barlow (which is excellent by the way), and the E.K. Johnston novel, Ahsoka.

Remember the first and only reality of the Sith; there can only be two, and you are no longer my apprentice. You have been replaced!

There was a considerable amount of story left on the floor when Star Wars: The Clone Wars was cancelled and one of the most important ones involved Maul. The last time we saw Maul in that show was in an episode from Season 5 called The Lawless where he had a confrontation with his former master, Darth Sidious. Sidious would murder Mauls brother, Savage Opress, and take Maul prisoner bringing him to a prison on Stygeon Prime where he was later rescued by Death Watch.

Maul and what remained of his Shadow Collective, which at one point consisted of the Pyke Syndicate, Death Watch, Black Sun, the Hutt Clan and the Nightbrothers, would eventually return to Mandalore. In what would be known as, The Siege of Mandalore, Captain Rex and former Jedi Ahsoka Tano would lead a clone army against Maul, nearly killing him. But Maul would again escape thanks to Tano choosing so to save Rex instead amidst the craziness of Order 66 going into effect.

All of this happened, including the events depicted in The Lawless, during the year 19 BBY, the most significant year to date in the Star Wars timeline in my opinion. So that means we have around 16 years of Maul being absent in any visual Star Wars media, either on television or film. So, what was he up to and how does he go from barely fleeing Mandalore with his life, to forming the Crimson Dawn and showing up in Solo: A Star Wars Story which takes place around 11 BBY? We can look to those sources already mentioned, plus a couple of others to piece it all together and help fill in some blanks. This will not likely get us to Crimson Dawn however as Solo: A Star Wars Story and its accompanying novel Last Shot by Daniel Jose Older is the first time its been mentioned ever.

If youre a fan of Star Wars Rebels or a Maul fanatic, then you know how and where he finishes up his last few years. Mauls first appearance in Star Wars Rebels occurs in an episode from Season 2 called, Twilight of the Apprentice which takes place roughly 3 years prior to the events at Yavin, which we of course saw in Episode IV: A New Hope.

From there, his thirst for revenge and obsession with Obi-Wan Kenobi eventually lands him on Tatooine around 2 BBY where he encounters the Jedi Master for the last time, who ends Mauls life. This was depicted in Season 3 of Star Wars Rebels in an episode called, Twin Suns. 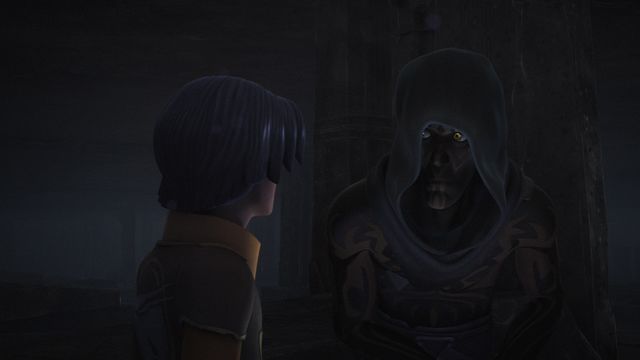 Forgive me, its just, Ive been alone so long. Its been years since Ive spoken to anyone.

~Maul to Ezra Bridger on Malachor

So, the timeline places Maul on Malachor around 3 BBY but according to Star Wars Rebels his ship crashed there years before and hes been alone ever since. This works with Solo: A Star Wars Story time wise as in the film he mentions being on Dathomir presently and summons QiRa there. The problem is that we are led to believe, after his ship crashed on Malachor, he was not in contact with anyone or certainly not in any shape to lead a large criminal organization from a remote location. This is obviously not the case.

He had also fallen out of favor with members of the Shadow Collective some time ago and from all accounts had no credits to fund a start-up. Its possible he simply used his authority and ability to influence the people required to get Crimson Dawn off the ground or at least gather a few remaining loyalists, willing to serve. These manipulation and cogent skills he learned both from serving under his Master Darth Sidious and ruling over his apprentice, Savage Opress. This leads to another issue the story group will have to tackle, the eventual demise of the Crimson Dawn or at least Mauls departure from it by 3 BBY. Again, there is no mention of Crimson Dawn before Solo and certainly not in any canon materials after.

All of this and more would have to be explained by the folks at Lucasfilm. Time is on their side though as 10 BBY to 3 BBY is plenty of time to come up with a reasonable explanation as to why things ended for Maul the way they did and his eventual falling out with the syndicate.

Maul is a great all-time Star Wars character and having some additional canon to reference when piecing together his timeline makes me happy. Although, I did always appreciate the clandestine aspect to his life and imagining him stewing alone on Malachor for years, slowly going more insane by the day was intriguing. There are so many things to learn about Maul during this time period it would take a good amount of story to learn it all, lets hope this wasnt a one off and theres a plan in place.

Whether its a standalone movie (doubtful), a comic book series or a novel, well have to wait and see but with nothing but questions now; its reasonable to expect some answers at some point down the road.