The Mand "Oh!" Lorian: Top Five Moments from The Gunslinger

In my review of The Gunslinger I made it clear that I thought it was the weakest episode of the series so far. Sure, it was filled to the brim with nods to the greater galaxy as a whole, but it never goes beyond that. Coming across as filler and unnecessary to the story.

Just because I didnt enjoy the episode doesnt mean there werent a lot of standout moments. The nostalgia and easter eggs, make a list like this even harder!

Here are our favorite moments from The Gunslinger. 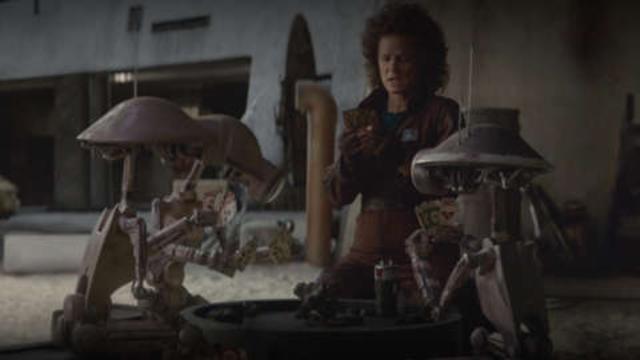 The Gunslinger introduces us to our favorite wacky space aunt with too many droids, Peli Motto played by comedy legend Amy Sedaris. She serves an important role in the episode by helping the Mandalorian take better care of Yiddle. Beyond that Peli and her pit droids give us a fun interaction that is a great example of a small moment that makes this universe so special. Playing Sabacc.

Its pure Star Wars fun and humor-filled with pit droids cheating at the classic card game. As well as Peli and the droids using parts like motivators and bolts as chips. It takes something from our world and inserts it in Star Wars making it feel familiar and other-worldly at the same time.

Its not hard to see Dave Filonis fingerprints all over this small moment, giving robotic droids life. It feels very reminiscent of the interactions between the Ghost crew and Chopper in Rebels. Filoni is so good at moments like these and I appreciate it even if it is very small. 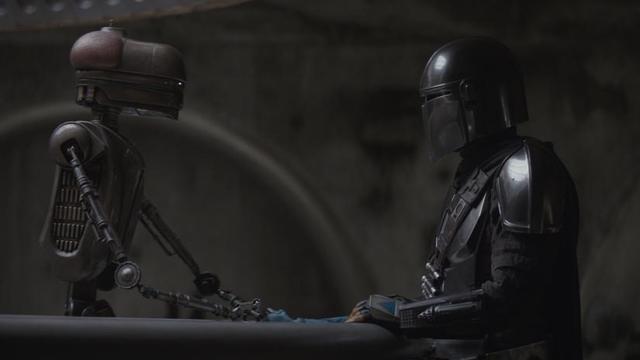 4. Return to The Mos Eisley Cantina.

Jon Favreau has made it no secret that the inspiration of The Mandalorian came from the A New Hope and in particular the cantina scene. That iconic location does so much world-building in such a short amount of time giving us a view into the galaxys underworld. Filled with aliens of every species and each of them having a story of their own. So its no surprise that we finally revisit the Mos Eisley Cantina so many years after it first entered our imaginations.

Once again filled with every kind of alien imaginable only this time droids are allowed! With a new droid bartender and our protagonist looking for a job, its classic Star Wars. We even have a cocky outlaw sitting in a booth, waiting for the main character. Although Toro Calican is no Han Solo.

In an episode filled with nostalgic moments, this one does the best of recreating that original Star Wars energy that we all love.

3. The Mandalorian and Toro Calican Take on Fennec Shand.


Ming-Na Wen is a badass. You know it. I know it. Its just a well-known fact at this point and any scene shes in is better because of it. Although she was heavily underutilized in this episode, the one moment we do see her is when she has the high ground. On the run from a bounty on her head, the Mandalorian and Toro go after the deadly sharpshooter and assassin.

Filled with fast speeder bikes and flash grenades, the altercation between the three is tense and shows off why Fennec is so deadly. When she has a clean shot or isnt blinded she never misses. Hitting the Mandalorian with blaster fire several times. If not for Toro pointing a blaster at her head, the Mandalorian would have been toast.

Even with a blaster at her head she still gets the jump on Toro nearly killing the arrogant newbie until the Mandalorian saves the day. Fennec is such a cool addition to the series and we can only hope that she somehow survived that blaster to the torso.

Since their introduction in A New Hope, the mysterious Tusken Raiders have been depicted as violent savages. Only known for attacking and killing members of the Skywalker family and any locals that come in their path. However, that depiction is changed after an interaction between the Mandalorian and the indigenous Tusken Raiders where he asks permission to be on their land.

Using sign language to communicate with the raiders and giving away Toros binoculars, the raiders let them pass in peace. Without any kind of violence or threat, they just let the bounty hunters continue on their way.

Its such a refreshing change to the depiction of the raiders because like the Mandalorian says they are the locals and this is their land. I think this series is at its best when it finds that Star Wars magic and flips our preconceived notions on its head. Which is exactly what this does. Its just such an interesting and cool thing to do. 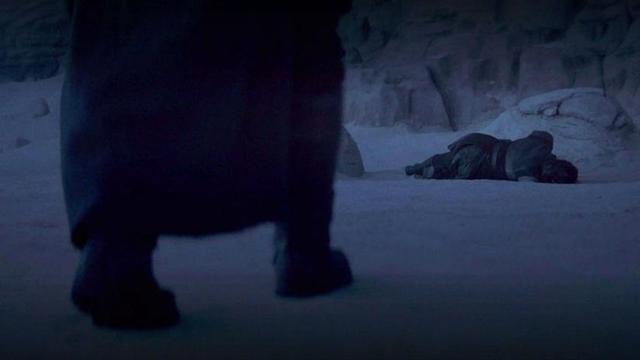 When the title card of episode five came on the screen I think many of us assumed that The Gunslinger was the Mandalorian. If not the Mandalorian maybe Toro Calican or maybe even Fennec. All that changes after the final scene and the implications of the episode completely change.

Showing off a mysterious character who finds the body of Fennec Shand and never revealing their face. Intentionally ending the episode on a cliffhanger that leaves us speculating on who this gunslinger could be. The most-mentioned name is Boba Fett. He died on Tatooine and in a series about a Mandalorian it would only make sense. Plus if it is Boba, the story possibilities are massive. Including a character that is beloved by a lot of Star Wars fans.

The final moment is my favorite because of those implications. It could turn out to be somebody completely different but what if it isnt? What a cool way to incorporate the character once again and possibly make him an antagonist for the Mandalorian. I doubt that well find out the answer for a while but its an exciting possibility.