Spoiler Warning! Episodic details are most certainly ahead.

With this second episode, Kaz tries to balance fitting in as a mechanic and citizen of Colossus and his primary role of being a spy for the Resistance. While The Recruit was all about introductions, The Triple Dark is all about acclimatization. Kaz is getting very impatient already.

We start at the Fireball shop were Kaz is unpacking a few things from home. He unpacks a lucky trophy which we dont learn anything about just yet, we only get the sense that its very important to him.

In the shop we meet Hallion (Neimoidian), a shifty and impatient client of the Fireball shop and someone Kaz thinks is up to no good. This paranoia and suspicion aimed at a revolving door of characters will likely occupy each episode as Kaz attempts to gather any intel he can on the First Order.

The dynamics within the group that we saw in the first episode are at play again with Tam being overly frustrated with Kaz, Neeku being Neeku and Yeager just wanting Kaz to focus on the task of being a member of the team.

Kaz embarks on a little fact finding with BB-8 and he encounters Grevel again, along with two thugs, who still wants the credits Kaz owes from their game of holo-darts. Instead of giving up this prized trophy, BB-8 helps Kaz get away where they end up in Flix and Orkas shop. Again, the trophy, which is made of Aurodium, comes up as Flix and Orka hint at its extremely high value. Kaz tells them its not for sale, again hinting theres a story behind it. 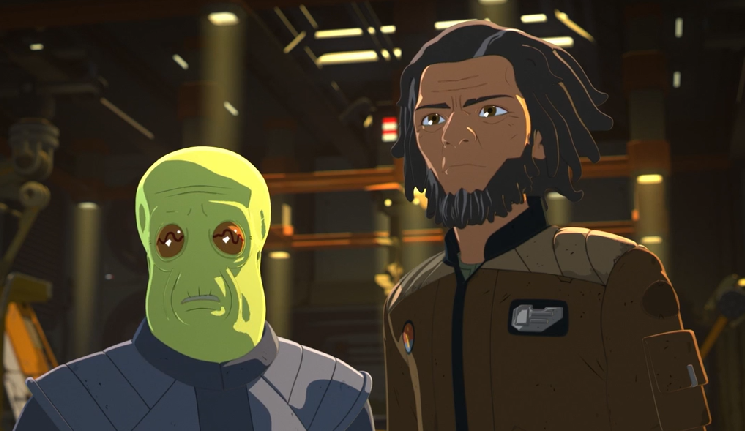 Back at the shop, Yeager warns Kaz that he needs to take his undercover role as a mechanic seriously because there are people on Colossus that are dangerous, although he doesnt mention them by name. As Kaz is contemplating this balancing act, eager to do well, we finally learn that the trophy was the first one he had won racing ships when he was younger. It further develops the thread that Kaz has a difficult relationship with his father, and that is out to prove something not only to him, but seemingly to the galaxy.

This uncertainty and eagerness to please obviously is a part of what Kaz is all about. His willingness to put himself in harms way just to impress his father, and others, is likely a thread that will get pulled throughout as the series moves along. This will no doubt lead to moments of danger but Im sure triumph as well.

So, the episode is called The Triple Dark and we finally learn that a triple dark a type of storm that makes it easier for invaders, particularly pirates, to attack the station thanks to the low visibility. Almost on que, we meet Quarren Kragan Gorr and his squad of rag-tag pirates which feature an excitable Trandoshan and a humanoid wearing old Stormtrooper armor. In response to the attack, the station enacts defenses and Aces Torra Doza, Freya Fenris, Hype Fazon and Bo Keevil launch to wade off the attackers. This is where we really learn what the true purpose of the pilots are, to defend the station and not just race.

I thought for sure we would see Kaz borrow a ship and join the dog-fight but instead hes stuck on the ground, sort of, and forced to help in other ways. This also brings me to what confuses me about this series so far. For a show built around ships and pilots, we see very little of them, even during this fight, most of time is spent on Kaz. Also, Kaz says theres too many pirates for the Aces to handle but its four against four and arent the Aces supposed to be the best of the best? Surely, theyre better than some random for-hire pirates and shouldnt need help. Its only episode two so Im not going to dwell on it but its a little confounding.

Anyways, with the pilots supposedly outgunned, Kaz gets the idea to use a communicator that belonged to Hallion, who he suspected was working with the pirates, to jam the pirates nav systems and communications. This causes the pirates to back off and retreat. The Aces seem to understand they had help with the win, but they are unaware Kaz was the one who gave the assist.

After the fight, Kaz tries to tell this to Yeager who is again dis-interested in what he has to say. Its clear Yeager is intentionally avoiding any trouble and/or conflict and as time goes on well most definitely learn why. My money is on Yeager being somehow, against his better judgement, involved in whats brought Kaz to Colossus in the first place. 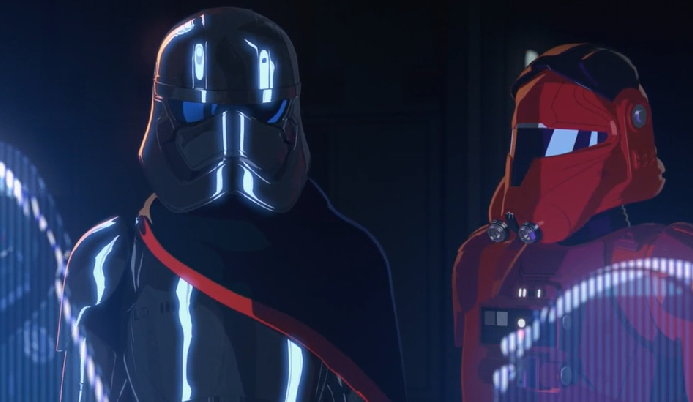 Finally, at the end of the episode we get our first look at Captain Phasma in the series! Back on a Star Destroyer we see Major Vonreg and Phasma talking to Kragan about the failed attack on the station. It seems the First Order has hired these pirates to wreak havoc on the station with the intent of getting Captain Doza, Station Operator and Torras father, to relinquish control of Colossus. They dont say why but its assumed the resources on this station are valuable enough that they dont want the station destroyed, just re-occupied.

Whats also interesting is that the First Order could likely very easily just take over the station themselves but for some reason want to remain behind the scenes. With it being in the early stages of the First Order, perhaps they arent ready to reveal themselves to the world yet, but we do know they have the Starkiller Base at this point so Im thinking theres another reason. They also mention Commander Pyre in this conversation, an elite stormtrooper who wears armour like Phasma. Pyre was seen in the trailer briefly.

Overall, this will be one of those episodes where the payoff comes down the road. You can see the linear seeds being planted but whether they bear fruit or not we just dont know yet. We didnt learn anything necessarily other than the fact the First Order really wants control of Colossus but arent willing to destroy it or do the dirty work themselves. They really want whats there and whatever it is, Doza is standing in their way.

I liked this episode mostly because of the pirate attack and the implications that it carries. It's interesting to see the First Order working with "less desirables" and you can of course sense Phasma's dislike of their undisciplined ways. I particularly enjoyed the Mad Max feel of the episode with Colossus doing everything it can to protect its primary resource from essentially marauders.

We've got a long way to go before we start discovering some character motivations, specifically Tam and Jarek but we can't expect too much in episode two of what will a multiple season series.

So what did everybody think of "The Triple Dark"? Are liking what you've seen so far from Star Wars Resitance? Let us know!