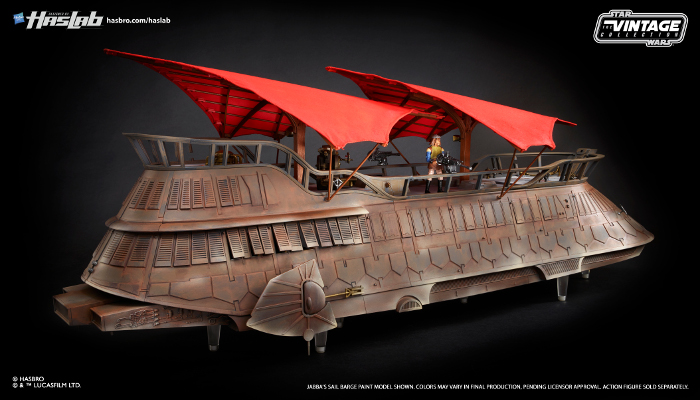 UPDATE: This item sold out in less than 10 minutes earlier today.

We wanted to remind fan overseas that limited quantities of Hasbros The Vintage Collection Jabbas Sail Barge will be available to purchase here on Thursday, 3/28, at 3PM EST (7PM GMT).

Please note, orders of more than 1 Barge or any orders with a US or Canadian shipping address will not be processed.

Jabba's Sail Barge, The Khetanna was a massive, 30-meter luxury transport capable of carrying up to 500 passengers and 26 crew members. Complete with 3 decks, the Sail Barge was primarily used to transport passengers (and prisoners) across the dunes on the planet, Tatooine. It was the site of the thrilling battle above the Sarlaac, and it met its fiery end at the hands of Luke Skywalker and his friends (to be fair, Luke did warn Jabba first).

Hasbro's The Vintage Collection Jabba's Sail Barge (The Khetanna), was originally announced on at the New York International Toy Fair on February 17, 2018 as the first HasLab crowdfunded project. The rules of the campaign stated that the barge would move into production when it reached its minimum backing goal of 5,000. The campaign was a rousing success, and reached a final stated number of 8,810 orders. Measuring approximately 4ft long, the barge also includes two 3.75-inch scale figures, Jabba the Hutt, and Yak Face on a retro Power of the Force style card with a collector coin and exclusive drinking glass accessory. It began reaching collectors in March 2019.