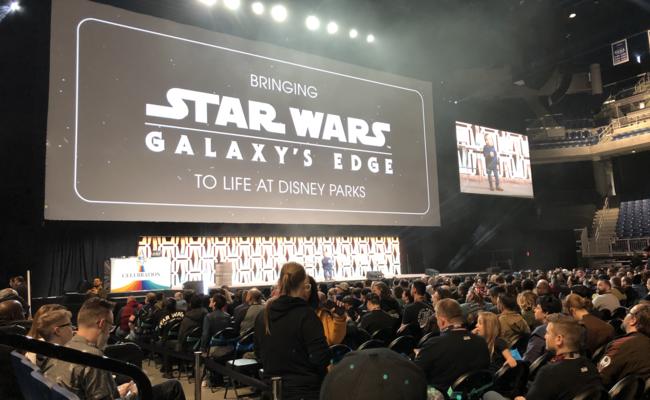 The Following is from Nick N. from our sister site Rebelscum.com.


Disney Parks gave us a special preview of what to expect when Galaxys Edge opens later this summer. Josh Gadd hosted a panel of imagineers to describe the detail to which Disney went to assure accuracy and the best depiction possible of the galaxy from far, far away.

Cast of Characters
In terms of who we can expect, previous footage already revealed an animatronic Kylo. During the panel, however, we learned that we can expect to see others familiars like Rey, BB-8, Poe, Hondo, Nien Numb, Rex from Star Tours, and even Yoda to name a few. Disney went to lengths to assure accuracy in voices and traveled all the way to Kenya to track down the original Nien Numb actor, brought Paul Rubins back for Rex, got Frank Oz to record dialogue, and even got the voice actor for Hondo.

Rides
We got a very small look at the Rise of the Resistance ride and other than a five second video from the beginning of the ride we know very little. It appears to be a linear story that riders will observe from a cart on a track. Riders will play the role of newly recruited Resistance agents that are captured by the First Order and thrust into an escape during a battle.

We also got some more detail about the Millennium Falcon ride. Riders will get to actually control the Falcon and serve in one of three roles. A pilot who steers the ship, a gunner responsible for defense, and an engineer who has to keep all the systems running and probably power to the hyperdrive. Depending on how riders do, the exit hallway for the ride will be in different conditions from pristine to battle damaged featuring sparks and smoke.

Atmosphere
In addition to the actors in costume, Disney brought John Williams on board to compose an original soundtrack for Galaxys Edge, featuring a new single by the Modal Nodes. Imagineers also told us that they snuck several easter eggs throughout the park that fans of the movies will be sure to spot. There are some fun touches too like using a decommissioned pod racer to serve as a spit in the market.

There will also be an interactive experience for park goers. A Star Wars datapad which will allow users to translate the alien languages around the park, participate in scavenger hunts, and tune intotransmissions to eavesdrop on various story segments from around the park. You can also compete in challenges with other park goers in support of the Resistance or First Order for control of the planet.

The early footage looks amazing and Disney is promising a truly immersive experience. From what we have seen so far, it seems like they are going to be able to deliver and subvert our wildest expectations. We eagerly await more details as we approach the launch later this summer.