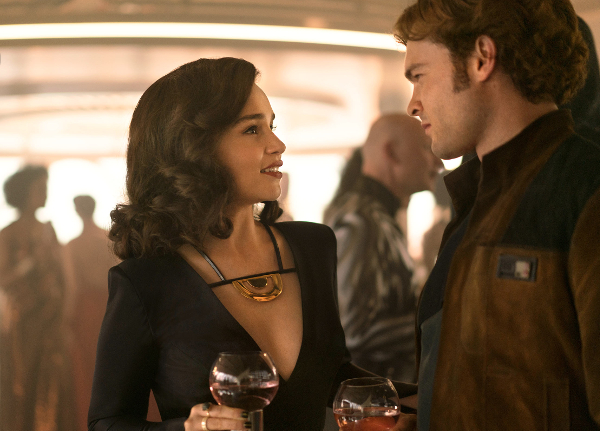 Emilia Clarke Talks About Solo And Her Role As Qira

Entertainment Weekly continues the roll out of Solo: A Star Wars Story related content this week with a new interview with Emilia Clarke who portrays Qi'ra in the film. Here's a portion from EW.com:

Game of Thrones fans know her as Daenerys Stormborn of House Targaryen, rightful heir to the Iron Throne, rightful Queen of the Andals and the First Men, Protector of the Seven Kingdoms, the Mother of Dragons, the Khaleesi of the Great Grass Sea, the Unburnt, the Breaker of Chains.

Star Wars fans will come to know Emilia Clarke only as: Qira.

This is a character who doesnt want her full resume out there. Shes a woman of shadows, of secrecy. Shes a woman of many identities, the truest ones hidden away and only visible to those she trusts, which may be no one.

Shes also one of the primary forces that shape the young smuggler we meet in Solo: A Star Wars Story.

As part of Entertainment Weeklys cover story about the May 25 movie, we caught up with Clarke to discuss what we need to know about this galactic femme fatale.


ENTERTAINMENT WEEKLY: Are you currently shooting the final season of Game of Thrones?

EMILIA CLARKE: Technically I am currently shooting Game of Thrones. But right now I am in Rome shooting a D&G campaign. So sort of a mixture of the two.

ENTERTAINMENT WEEKLY: Sounds like a busy time, so thanks for talking to me about Qira. She and Han Solo go back to their childhoods, so can you characterize the setup of their relationship?

EMILIA CLARKE: Well, they grew up as comrades, essentially. They grew up as pals, as partners in crime. There is obviously the romantic side of things. But they grew up together. So they were kids together. And the beautiful thing about this Han Solo story is its highlighting all of the most brilliant aspects of Han Solo the character and characterizing those aspects in characters that he meets on his journey to becoming who he is.

ENTERTAINMENT WEEKLY: These people all represent different sides of who he becomes?

EMILIA CLARKE: Thats kind of the story, really. You are seeing all of these different elements that make up who he is through the people and the interactions and the relationships just as we all do as human beings. We are simply the embodiment of our experiences, essentially.

ENTERTAINMENT WEEKLY: Theyre guiding him, inspiring him. Maybe corrupting him?

EMILIA CLARKE:You see the beginnings of him, this loveable rogue. You get it fine-tuned throughout these relationships, and Qira is one of those relationships that has an impact on him as a character. I mean, hopefully [laughs]  if I have done my job. And within that relationship, the thing that that you see with Qira is that she an enigma.

ENTERTAINMENT WEEKLY:So through her, he learns not to show his cards to people.

EMILIA CLARKE: She is a little bit of a tough one to get a hold of, really. There is this underlying joy in an origin story because you know where they end up. And Qira is nowhere to be seen, so  something has happened! [Laughs] You know what I mean?

ENTERTAINMENT WEEKLY: The film will give us a reason why he doesnt talk about her?

EMILIA CLARKE: Something must happened to affect him as a person, but for us fans not to know about her. Twists happen, and there is this great idea of trust  and who do you trust and how do you trust? And which side of the tracks are either character from  or going to?

ENTERTAINMENT WEEKLY: The filmmakers described her as a femme fatale in this movie that is partly a film noir.

EMILIA CLARKE: It is. Mystery. There is a thing throughout the relationship you just cant put your finger on. And thats Qira. Every time you think you have got her number you realize you havent at all. [Laughs] Which is really hard to play. The goal is that the shadow of Qira is there in Han as a character that we know. This girl is another texture that makes up who he is when we first meet him.

Read the full article at EW.com!