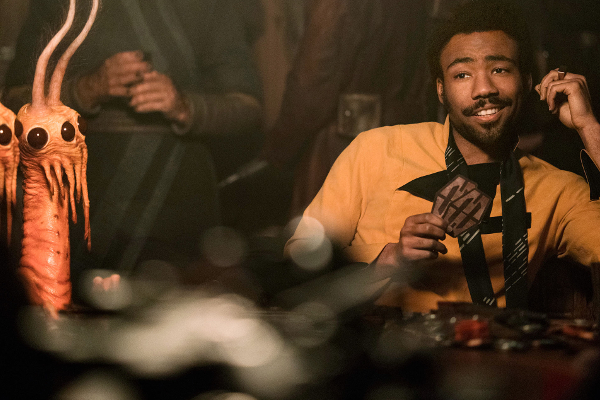 Check out the interview with Donald Glover who will be portraying Lando Calrissian in the upcoming Solo: A Star Wars Story. Here's a brief snippet from EW.com.

If you had to choose one word to describe the multifaceted Lando Calrissian, card shark and grifter turned baron of the gas-mining operation at Cloud City, thats probably the best you can do.

Lando has always been a bit of a con man, but Glover only steals scenes. He didnt even say anything in the new trailer, and already fans are swooning for Childish Landino.

Glover also got some key insights from original actor Billy Dee Williams, particularly about what it was like to be an icon of representation back when he was the one and only major character of color.

Just a few days after he performed at the Grammys and took home a best traditional R&B trophy for Redbone, Glover let EW pick his brain about the Star Wars character whos so cool, he needs a galaxy full of capes to stay comfortable.


EW: Im interested in what you were able to discover from Billy Dee Williams when you met with him. What was it like with two Landos getting together?

Donald Glover: It was really, really relaxed. He was great. I mean, I had a lot of questions. And then he just told me, just be charming. [Laughs] And so, I was like, Okay! I just kind of did that. He said, Just be interested in things. Lando has, I wouldnt say eccentric, but eclectic tastes. So I tried to work that into the role as much as possible.

EW: What was it you were curious about, since you said you came in with a lot of questions?

Donald Glover: I just wanted to know, Star Wars was such a big deal and then they make the second one and youre kind of the first and the almost only black guy in the universe at that point. I was like, How did you go into that? What were your thoughts? Its always a big thing when you break a mold. What was the thought process of that? He gave some good advice about this, about being yourself as much as possible, making the character a real person, rather than the whole identity for a whole group of people.

EW: In the film, youre paired with Phoebe Waller-Bridges character, L3-37, how would you describe their relationship?

Donald Glover:I think they are both kind of self-made, and they get each other that way. Its lovingly contentious. I dont know if me and Phoebe were like this because I just love her. Being in a movie with her is kind of a blessing I didnt even know I wanted. But she also is so smart she calls me out on it. Its just cool to have somebody like that around, you know? Really funny and really honest.

EW: We see the Millennium Falcon under Landos ownership and it is a very different looking ship. What do you think the Falcon reveals about who Lando is?

Donald Glover: Hes a very particular person with particular tastes and he likes the comforts of life. I would live in it right now, to be honest! [Laughs] In between takes, theyd be like, Okay, we are going to set up for the next shot , so you can go sit in your chair or whatever, and Id be like, Actually Ill just stay in Landos room. It was that nice! I would just lay in his bed and read a book or write something because it is very comfortable. I think he likes to be comfortable. Hes not a cowboy kind of guy.

EW: How would you define Landos personality as a younger guy? How do he and Han differ?

Donald Glover: He likes to know his way in and out of any situation that hes in. Lando likes rules because hes somebody who is in a position to benefit from rules.

EW: By getting around them?

Donald Glover: Hes smart enough to figure out a way to like get out of things, like loopholes, And I think Han is more of a rule breaker and he can kind of get away with it.

Please click here to read the entire article at EW.com!