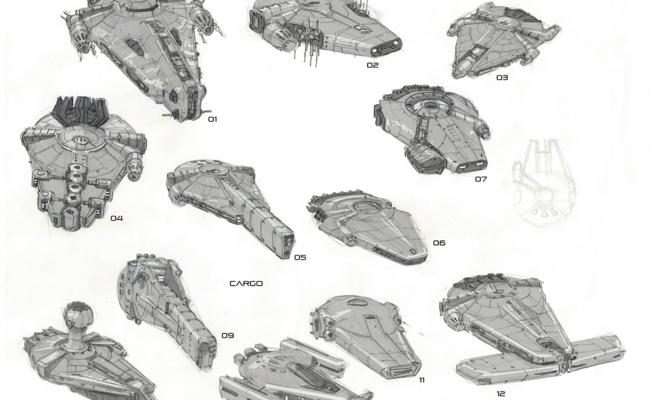 StarWars.com have a great article up about the process of redesigning the Millennium Falcon into what it once looked like, before all those "special modifications". Below is part of the article. Click here for more!

When James Clyne first envisioned remaking the Millennium Falcon, he pictured the ship that made the Kessel Run having its perfect and pristine hull stripped away, panel by panel, to reveal the hunk of junk beneath the shiny exterior.

The move would be a combination of movie magic and something of a parlor trick. The way I saw it, its like ripping a tablecloth off, you know those magicians that rip a tablecloth off and everything is still there? All the things that we know and love about Han Solos ship is underneath that. That was kind of the starting off point.

Clyne, Lucasfilms design supervisor for Solo: A Star Wars Story, and his team ultimately created about 60 iterations of the fastest ship in the galaxy before landing on the design thats featured in the new film, out now. The process took Clyne back to his childhood and essentially transported the entire crew back to the 1970s to explore muscle car culture, model building, and the original concept art that inspired the creators of Star Wars in 1977.

I think the big exciting thing about doing a new Falcon was the question of, we all know what an old Millennium Falcon looks like, but what does the new Millennium Falcon look like? That was really exciting, Clyne says. What does a clean Millennium Falcon look like? I think that was the big thing that I always wanted to see going into the movie. As a kid, I just loved it for what it was. I thought it was perfect. But when it was proposed that you would see a cleaner, newer Lando version, I couldnt get more excited about and more scared about that prospect, he says with a laugh. There was a certain level of sheer terror in taking this on. I mean, its like the most beloved thing youve ever seen in the Star Wars universe. Its like somebody asking you to change the Eiffel Tower or something.

We went kind of crazy in the beginning with ideas, Clyne says, with designs that at one point called for adding another cockpit to the craft to make the unmistakable silhouette more symmetrical and huge spoilers on the back like a hot rod.

The script called for an escape pod, and we knew we wanted the escape pod on the nose. Is it just another spaceship, just superglued on the front of it? Does it integrate with the ship perfectly so that when it comes off its a big surprise? Clyne asks. And that was definitely the story dictating the design. For me, even though I deal in the world of design, I think story should be first and foremost. Its our job to certainly service the story and not the other way around.

In reimagining the iconic ship, Clyne had the chance to answer something hed been wondering about since he was a kid playing with his own toy version. It always had that funny little gap in the front  the mandibles  and even as a kid, I remember getting the Millennium Falcon toy and I always wondered, why is it shaped this way? Was there something that was supposed to go there? Was there more to it? It was always kind of a mystery to me and here I am 40 years later actually having to solve that problem.

Its an opportunity his eight-year-old self never could have even dreamed of. People ask me, like, is this a dream come true? And I say its not because its a dream I never simply had. It didnt seem possible, but, in fact, I think Star Wars is the reason I work in the film industryThe one thing that sparked it off was having those toys. Those toys were so influential on understanding not only film but design.