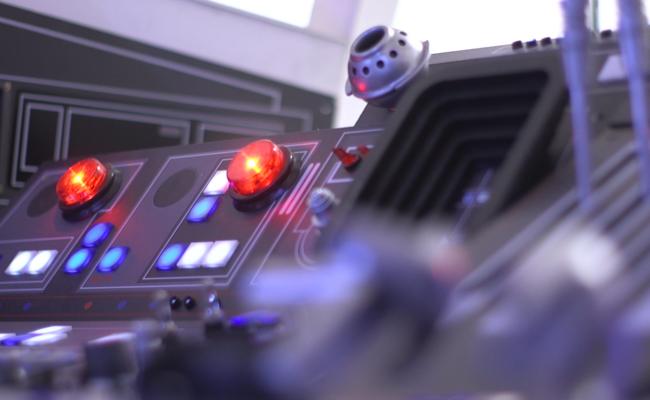 The first stop for the Millennium Falcon Experience tour is at Northern Kentucky University, and today was the first day fans could visit. Artist Chris Trevas made the trip down from Michigan to check it out and posted some news and pics on his Facebook page earlier today. Chris mentioned that this is a "Fan made replica designed to fit into three shipping containers. Adapted from production blueprints. Some detail panels are made by the studio." You can clearly see the shipping containers in the photos below. Also, what's a Star Wars event without a line around the block?! The free timed tickets were distributed on a first come first serve basis and Chris also mentioned that the line was capped for the day by noon. This means they had given away all of the tickets for the entire day and now it was time to hurry up and wait in a line. Or you could leave and come back at your designated time. The event closes tonight at 7pm and runs from 9 a.m. to 5 p.m. Saturday and Sunday.

Blast off on the #MillenniumFalcon for yourself! Go inside a replica of the iconic #StarWars spaceship at Northern Kentucky University this weekend only. Well tell you how on @FOX19! pic.twitter.com/MRZiDZQXqW

Come check out the Millennium Falcon at NKU this weekend! (The only campus to have it.) pic.twitter.com/Dal558hcDm

The shipping containers may not look like much, but she's got it where it counts, kid.

Check out a few photos of the Millennium Falcon on campus! Follow NKU on Snapchat (nkuedu) for more. The exhibit will be on campus all weekend and admission is first come, first served. pic.twitter.com/k64hJAm3VB