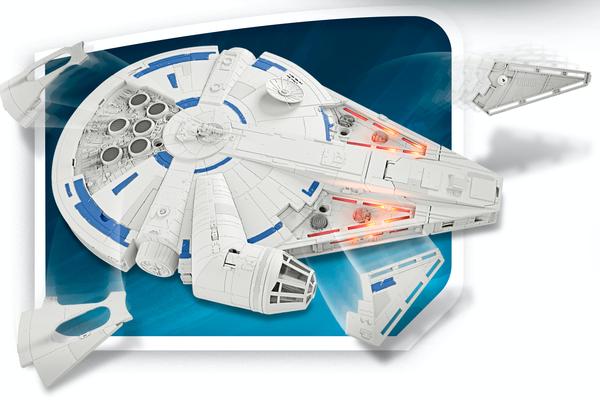 More Clues To The Transformation Of The Millennium Falcon

I was looking over the flurry of information that came in today and noticed this small blurb from Hasbro for their 3.74-Inch Millennium Falcon we reported on earlier.

Make the KESSEL RUN in less than 12 parsecs with the MILLENNIUM FALCON! Relive the adventure and imagine flying through every obstacle like ace pilot HAN SOLO with speed and action. Fans will experience flashing lights and sounds as they pretend to race along KESSEL RUN. Press the button to pretend that the iconic starship kicks in to hyperdrive with lights and sounds. Press the button a second time for accelerated lights and sounds as well as activate the rumble pack vibrations! Push the button a third time to pretend that your ship picks up even more speed and watch the panels pop off before rumbling to the finish line! Comes with an exclusive 3.75-inch scale HAN SOLO figure and removable mini ship. Both the figure and mini ship are FORCE LINK 2.0 enabled, with phrases and sounds activated by the wearable technology, sold separately. Includes 1 vehicle (with removable mini ship) and 1 figure. Requires 3 AA batteries, included. Available at most major retailers.

Could it be that Han pushes the Millennium Falcon to the max during the Kessel Run that it literally starts to fall apart? We will find out in less than 100 days!