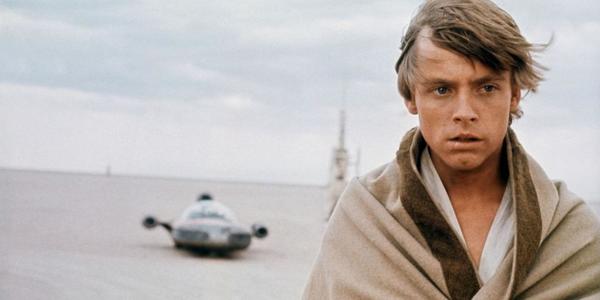 The following piece -"A Heros Journey - Luke Skywalker" is by Steve Dunk.


"A hero ventures forth from the world of common day into a region of supernatural wonder, fabulous forces are there encountered and a decisive victory is won. The hero comes back from this mysterious adventure with the power to bestow boons on his fellow man."

When Joseph Campbell wrote "The Hero with A Thousand Faces" in 1949 thus giving the world the monomyth, or the "Hero's Journey", we can say with some certainty that Luke Skywalker was not on his mind. Thankfully, he was on the mind of a 30-year-old George Lucas who was using Jungian archetypes and Campbell's story template to create one of the greatest "hero" characters the world of fiction has ever known.

Now with the release of Star Wars Episode VIII: The Last Jedi we are just one film away from seeing the greatest character arc in the history of cinema come to an end. It's of course all gravy at this point as we weren't supposed to be here. There wasn't supposed to be a The Last Jedi or A Force Awakens or the yet to be determined title for Episode IX, which currently has a production tag of "Black Diamond". "Black Diamond" of course refers to carbonado which is the strongest natural diamond found in the universe and amongst many characteristics has a strong luminescence. If that word is familiar to you it's because you've heard it before from a dear old friend...

"Its energy surrounds us and binds us. Luminous beings are we, not this crude matter."

-Yoda (The Empire Strikes Back)

Lets get back to Luke Skywalker. Mark Hamill himself has said many times that to him Luke's story arc was complete after the events of Return of the Jedi and yet here we are. I have to believe no one was more surprised or happier to get the call from J.J. Abrams regarding The Force Awakens back in 2013 than Hamill. And what's remarkable about the story telling aspect of the new trilogy is that it's been a seamless transition to the extraneous steps of the "Hero's Journey". The parallels of Luke's path on screen through all seven films and Campbell's "Hero's Journey" are plain as day and cannot be understated.

Starting with David Adams Leeming's "Miraculous Birth" we see in Star Wars Episode III: Revenge of the Sith Luke Skywalker was born under extreme duress. His mother, Padme Amidala, died shortly after birthing Luke and his twin sister Leia and as we all now know they were separated and hidden for their own safety. This is where we enter Leeming's "Initiation of the Hero Child" and the "Withdrawal from Family for Mediation and Preparation" phases of Luke's path. The mythology behind this stage of Luke's life is astoundingly beautiful because of course as an unaware moisture farmhand; Luke is unknowingly preparing for his "Call to Adventure". Only Jedi Master Obi-Wan Kenobi, charged with being Luke's silent guardian, is keenly aware that his role as "mentor" or "sage" is forthright and that Lukes path is certain.

Moreover, if not for the great Star Wars Rebels we would have no visual evidence of this important stage of both Luke and Obi-Wan's journey. In a watershed Star Wars moment (Episode 20 of Season 3 titled "Twin Suns") we have Obi-Wan having just defeated Maul (formerly Darth) riding his dewback to the Lars moisture farm. It is here we see Kenobi observing Aunt Beru from a distance calling a young Luke in for the night. Based on timelines, we can surmise that the Luke we see is 17 years old at this point, 2 years away from the events in Star Wars Episode IV: A New Hope.

A New Hope is where we start up on Campbell's monomyth, which consists of a "Call to Adventure", "Refusal of the Call", "Supernatural Aid", "Crossing the Threshold" and "Belly of the Whale". Now, if you've seen A New Hope you can easily plot a course straight through that film with those five stages of Lukes journey from meeting Kenobi, to losing his family, to going off into space and finally victory at the Death Star.

The second act, Episode V: The Empire Strikes Back is meant to depict Luke's attempt at resolving the problems which arose from the events in A New Hope. In this act, Luke and the rebel alliance, find themselves in even worse pitfalls than the first and are ill equipped to resolve them. So Luke must not only learn a new skillset (the Force) but arrive at a higher sense of awareness and what he's meant to become, in this case a Jedi Knight. This in turn will have a profound effect on Luke as of course new details regarding his lineage and purposefulness is revealed, thus forever changing him. This phase of storytelling, commonly referred to as the character development or character arc phase, is where we also meet another "mentor" archetype in Jedi Master Yoda, replacing a fallen Obi-Wan Kenobi.

When we pick up Lukes story in Episode VI: Return of the Jedi the third and final act, we see resolution for a now Jedi Master Luke as he has come to terms with his lineage (Darth Vader), defeated the enemy and is left with a new sense of purpose and his place in the universe. This would seemingly bring to a close the "Hero's Journey" but in this array the "return home" is symbolic rather than practical as Luke has learned the identity of his true parents and that a Jedi's home is relative.

In film, that was the last we thought we'd see of Luke Skywalker. We've since learned that George Lucas did have a story treatment for Episodes VII, VIII and IX which he would have developed after the prequels which started with Episode I: The Phantom Menace in 1999. But for many years, the events after Return of the Jedi and any adventures Jedi Master Luke Skywalker would go on would be relegated to novels and comic books. Fate would intervene in 2012 when the Disney Corporation purchased LucasFilm and immediately had plans to begin production on new Star Wars feature length projects. A story group was put together which featured Pablo Hidalgo, J.J. Abrams, Michael Arndt and others and they outlined a three picture story treatment which would kick off in 2015 with Episode VII: The Force Awakens. While reports varied about the amount of plotting Luke Skywalker would get in this new trilogy, the point was that he along with other original trilogy heroes like Princess Leia, Han Solo and Chewbacca were back.

The events that would follow in Episodes VII and VIII are set 30 years after Return of the Jedi and are the result of established plot mechanisms which were used to set the table for Luke Skywalker's return. The story goes that in his vanity and hubris he tried to train the next generation of Jedi's when Ben Solo, son of Han and Leia's, was corrupted by a new force wielding villain and turned to the dark side. This failure sent Luke in search of the first Jedi temple to the island of Ahch-To, forced himself into exile and finding him became the plot focus of Episode VII.

"The trick in returning is to retain the wisdom gained on the quest, to integrate that wisdom into a human life, and then maybe figure out how to share the wisdom with the rest of the world."

These films have given the writers the opportunity to truly complete Luke's "Hero's Journey" with the final two phases of his character arc. Campbell's "Master of Two Worlds" and "Freedom to Live" from a mythology standpoint have not only given Luke Skywalker the opportunity to come full circle as a Jedi but has given him the preeminence above those before him. In The Last Jedi Luke uses force projection to help stay the First Order and allow the resistance to escape and fight another day, but by doing so has depleted his force energy. As the physical Luke collapses, hes able to drag himself to his mediation state and materialize into force energy itself in front of setting binary suns. This is a call back to the first time we see him on Tatooine where his aunt and uncle are holding an infant Luke facing the binary suns of that planet.

As for Luke himself, he has come to terms with the mistakes of the past and with a valuable lesson from his old master Yoda, learns no one is truly one with the force unless they grant themselves absolution. He's learned that by embracing the freedom to live so to must you embrace the freedom to die. Its in this final edification that hes shown what it means to let go of fear, anger and hate and become one with the Force.

The Luke Skywalker Marathon which will be seven movies in length will become a reality in December of 2019...MTFBWY.