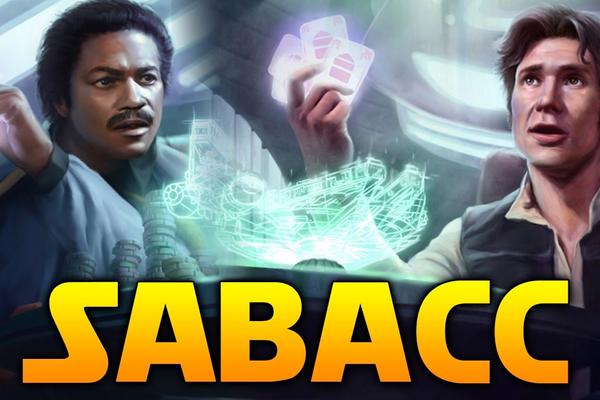 Sabacc Is More Than Just A Card Game

The article below, "Sabacc Is More Than Just A Card Game" was written by Steve Dunk.

Sabacc Is More than Just a Card Game

In the months leading up to the release of Solo: A Star Wars Story youre going to hear a lot about a game called Sabacc. So, what exactly is Sabacc and what is significant about the Cloud City Sabacc Tournament?

For starters, Sabacc is a high stakes card game which uses 76 cards, 60 of which are numbered and divided into four suits. The remaining 8 cards are face cards. Originally the game was meant as a type of fortune telling favored by the Ryn and that explains the similar look the cards have to the more common tarot cards. Although there are several variant styles of gameplay, the two most common are Bespin Standard and Cloud City Casino Variant.

One of the most popular Sabacc tournaments was the Cloud City Sabacc Tournament which was of course held in Cloud City, Bespin. It was the site of many famous encounters between some of the universes greatest gamblers, criminals and organized crime families. The infamous 17 BBY tournament was a nasty affair that involved the Hutt family, Alderaanian resistance and the Galactic Empire. That particular event ended in violence as it was discovered that certain parties were using the tournament as a clandestine cover-up to help transfer and fund illegal activities.

The next noted point in history occurred in 5 BBY when a human male gambler name Six Trouvee entered a contest with the Hutts to bet on the outcome of a skirmish that occurred at YagDhul. When the Imperials caught wind of the gamblers they attacked them thinking they were supplying intelligence to the insurgents.
This caused Trouvee to flee in his ship the Millennium Falcon, an YT-1300f Class Star Freighter, with the Desolator an Imperial Class Star Destroyer in hot pursuit. During the chase the Desolator accidentally shot down two of its own Tie Fighters resulting in Trouvee to lose his bet to the Hutts by two fighters. Suddenly, in desperate need of credits, he entered the Cloud City Sabacc Tournament to pay off his debts to the Hutts.

Trouvee managed to make it to day three of the four-day tournament but was running low on credits when he encountered a fellow gambler by the name of Lando Calrissian. With the pot up to 90,000 credits and a seemingly unbeatable hand, Trouvee threw in the keys to the Millennium Falcon only to be beaten by Calrissian who had the unbeatable hand known as the Idiots Array. 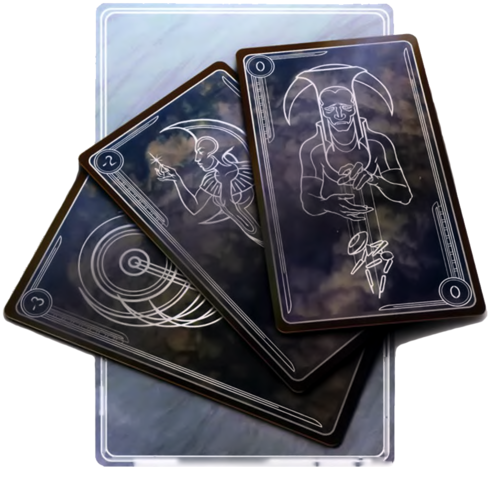 To win a game of Sabacc you need a hand that totals a positive or negative of 23, that hand is called a Pure Sabacc. To beat a Pure Sabacc you need the Idiots Array which consists of three cards that are one of the two idiot cards, a 2 card and a 3 card. As stated, there are only two idiot cards in the deck so this hand is extremely difficult to get. The first canonical appearance of the Idiots Array is in Season 1 Episode 11 of Star Wars Rebels in an episode called Idiots Array. Lando Calrissian does appear in this episode and plays a game of Sabacc with Zeb, winning Chopper in the process.

While its unlikely well see the Trouvee/Calrissian game depicted in the Han Solo film due out in May, one game that Im sure we will see, or at least be strongly referenced to, will be the Sabacc match between Lando Calrissian and friend and famed smuggler Han Solo.

This moment in time occurred during the Cloud City Sabacc tournament in 2.5 BBY at the Yarith Bespin Casino. The tournament itself was nothing special other than having over 100 competitors, but fate would intervene at the final table for the five finalists who included both Solo and Calrissian. 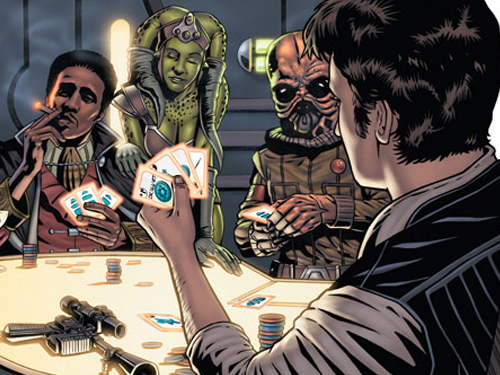 By the three-and-a-half-hour mark two of the five had dropped out leaving Solo, Calrissian and a Chadra-Fan, who folded early in the last hand. The pot only had 20,000 credits in it at this point and Calrissian was confident enough with his near Idiots Array that he placed a heavy bet and put up any ship on his lot. He was beaten by the Corellian who as it turned out had a Pure Sabacc hand and won not only the tournaments riches in credits but the famed Millennium Falcon as well. Calrissian wasnt too happy about giving up his prized ship and contested the conditions, but a bet is a bet and Lando knew better than to back out on such a grand and publicized occasion.

Another aspect of historical significance for this game was the fact that during the final round they played a variant version of Sabacc called Corellian Spike. In this version you use six-sided dice on top of the standard deck of cards. The pair of gold dice that Han Solo used to win that tournament, and the Millennium Falcon, he kept them for himself and proudly hung in the cockpit of the Falcon for all to see. These gold dice are the same pair that we saw in The Force Awakens and The Last Jedi hanging in the Falcons cockpit and had been for nearly thirty-six and a half years. 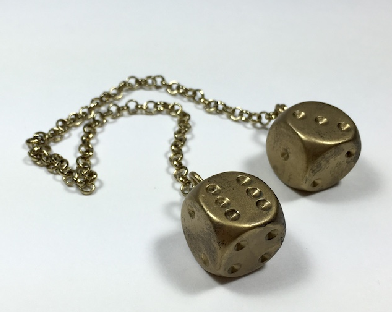 In The Last Jedi while the falcon was on the island Ahch-To, Luke Skywalker snuck in and took Hans lucky dice to then give them to his sister General Organa on Crait, albeit in projection form, as a memento from her fallen husband.

So Sabacc has played a key role in the history of not only Han Solo but the greater Star Wars universe as well. And its important to note that the Cloud City Tournament or even the game itself has never appeared in any feature length film to date.

How Ron Howard and company plan to recreate this important part of history remains to be seen but I would bet lots of credits that its something they deem as required storytelling. This game between Solo and Calrissian happens dangerously close to the events in Star Wars: A New Hope so one cant help but wonder if well see the meeting with Luke and Obi-Wan on Tatooine in the Cantina. Or perhaps flying off into space aboard the Falcon for him and Chewbaccas first time would be a nice way to end things, the rest we can imagine for ourselves.


The article above, "Sabacc Is More Than Just A Card Game" was written by Steve Dunk.

Topps DigiCon 2020 To Celebrate Collector Fandom Across Sports And Entertainment With First Virtual Convention
May The 4th Gamer Deals
I, Lobot
The Wookiee Dilemma
A Closer Look At Rey
What's So Great About Han Solo Anyways?
A Hero's Journey - Luke Skywalker