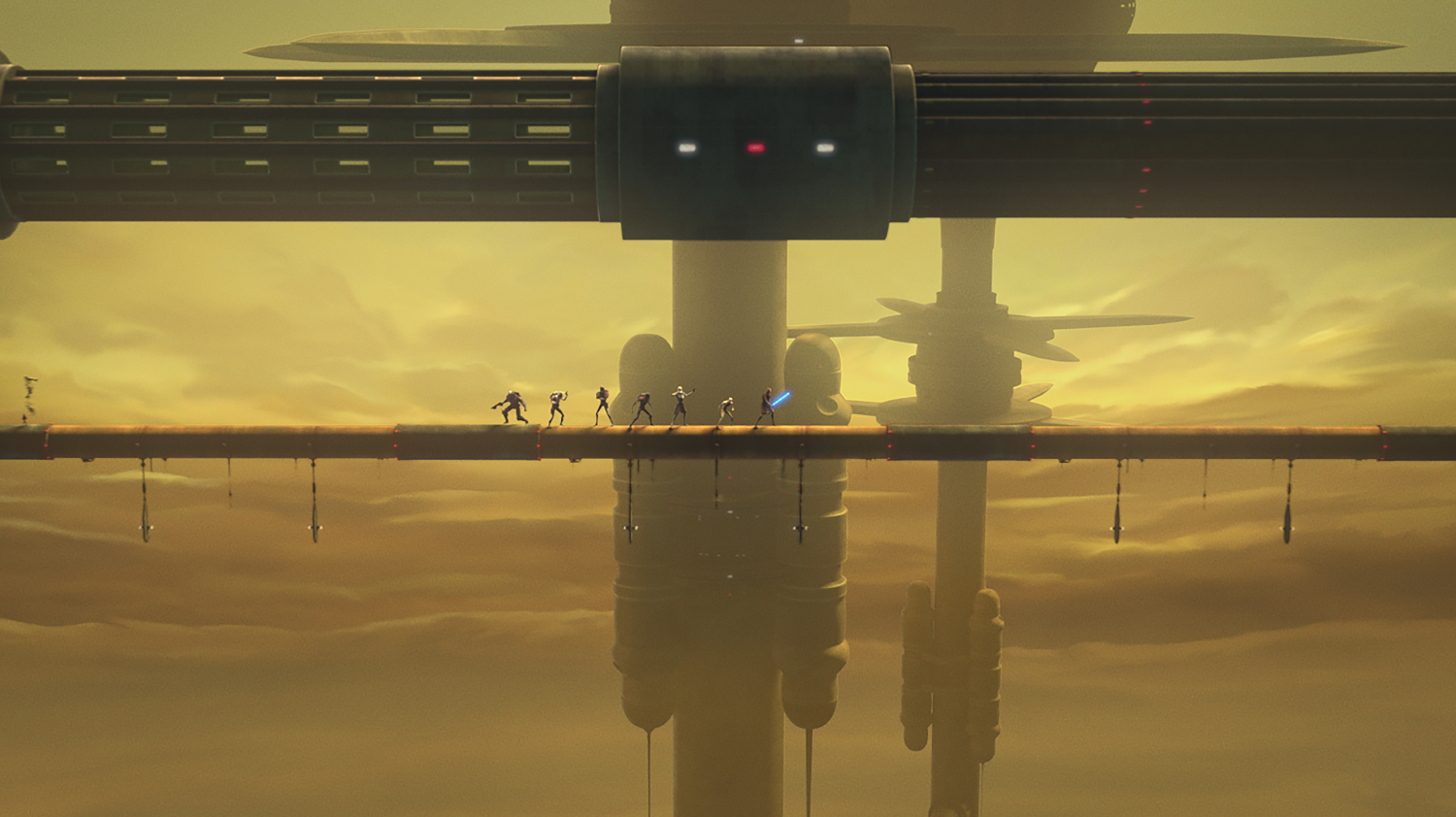 The Clone Wars "On The Wings Of Keeradaks" Review 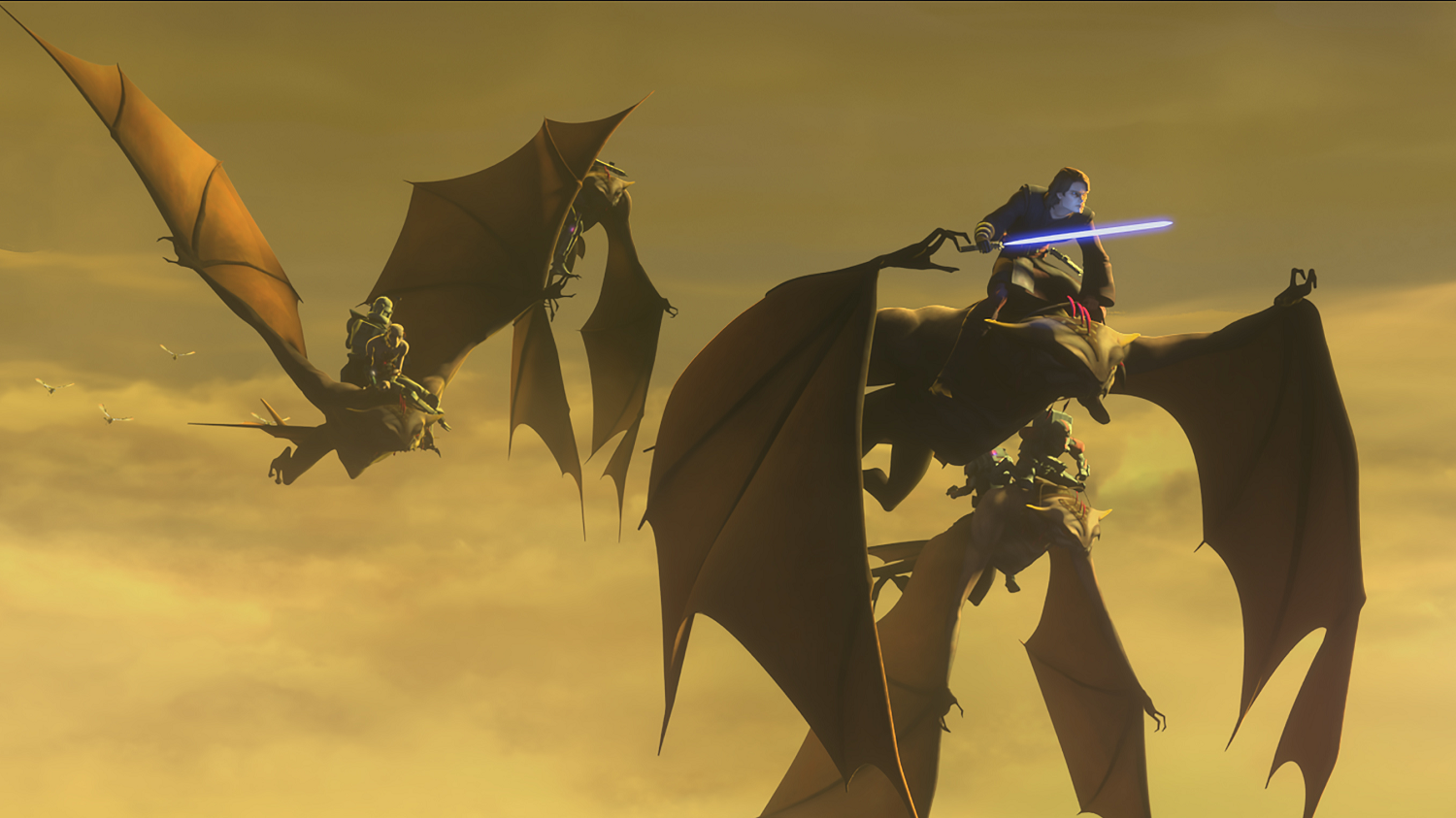 Okay, now that we know for sure Echo is alive; its just the simple matter of getting whats left of him out in one piece! Thats where this episode starts, right where we left off last week, with our Bad Batch troupe trapped in Wat Tambors little shop of horrors in the city of Purkoll.

Before we get to that, as with the first two episodes, lets look at what changed from the animatics. Once again, the only significant changes happen in the opening bits, and once again it starts with the motifs.
This week, the fortune cookie moral was changed from

In war there is no such thing as neutrality.

Survival is one step on the path to living.

The original refers to Wat Tambor and the Techno Union, their so-called neutrality in the war between the Separatists and the Republic. This of course wasnt true; Tambor was clearly and quite openly a Separatist.

What theyve gone with, more of a platitude really, is just as literal and refers to Echo and Rex equally. As before, theyve chosen a more personal approach, albeit a ubiquitous one.

The first and only real story change happens very quickly in the episode. In the animatic version, Anakin has a discussion with Wat Tambor, buying his team some time while they free Echo safely. Tambor mocks Anakin and exhibits the Organic Decimator on a helpless poletec, and they have a debate about the Techno Unions neutrality.

In the new version, this is completely cut out and Anakin spends his time applying production pressure to Tech and Rex. Perhaps the team thought this was a little too harsh, seeing a poletec tortured and killed by the decimator? Or maybe the Techno Union/neutrality issue was getting repetitive. Either way, its too bad they cut it; it was a great back-and-forth between the two, with a steady and tempered Wat getting a bit of a rise out of Anakin.

The rest of the episode sticks closely to the animatic as our team escapes on the backs of the keeradaks, flying back to the Poletec village with D-Wings in close pursuit.

Once there, they convince the Poletecan Chief that its their fight as well, and if theyre going to win, they need to work together. Which is a good thing as Wat sends most of his force against them including a pair of octuptarra tri-droids.
They emerge victorious, thanks to some great teamwork and some impressive moves from Anakin, and the episode ends with them boarding the Havoc Marauder for Fort Anaxes.

Judging these episodes on their own narrative merits is mostly pointless since its just one long episode, broken into four parts. Having said that, this episode to me is the most impressive visually, certainly once they are clear of the tower and out into the open.

Their escape on the keeradaks and the ensuing battle in the village is where the new animation really shines bright. The team, led by Animation Supervisor Keith Kellogg, isnt restrained by the claustrophobic nature of the tower and has a chance to pull back and show some scale. Its a beautiful episode to watch and helps the tone and pace of this escape chapter work so well.

The village battle sequence is choreographed extremely well and flows seamlessly, with the camera taking a 360 degree approach. By making the action heavy but not insurmountable, they are able to show off the individual talents of the Bad Batch, Rex, and Anakin. Even a still Borg-looking Echo gets in a few shots, although his role for the moment is secondary.

Speaking of Echo, we shouldnt lose sight of whats happening in this episode, these folks putting themselves on the line to rescue him. And it didnt take long for Rex and Echo to get back into the swing of things, with Rex always having a watchful eye on his still healing friend.

But its clear, reinforced by the final shot; Echo is understandably damaged from his experience with Tambor and will need some time to get back to his old self. Its not for naught though, as Tambors experiment will be the instrument of his defeat, with Echo having access to his network. And the Skakoans decision to keep this from Trench and the Separatists will only come back to bite him in his metal butt.

This arc wraps up next week with Unfinished Business

Its amazing, we waited years for the return of The Clone Wars and its going by in a flash! Not much to spoil here, as with the others, theres an animatic laying out the final episode so if youve seen that, then you know precisely what happens.

If you havent, then youre in for quite a treat as the final episode in the Bad Batch arc ends on a really high note. You wont be disappointed.

Having said all that, and having watched the animatics many, many times, the episodes for me have felt fresh and new. Whether its the revitalizing new animation, or the subtle change made to the stories, its been nothing but good.