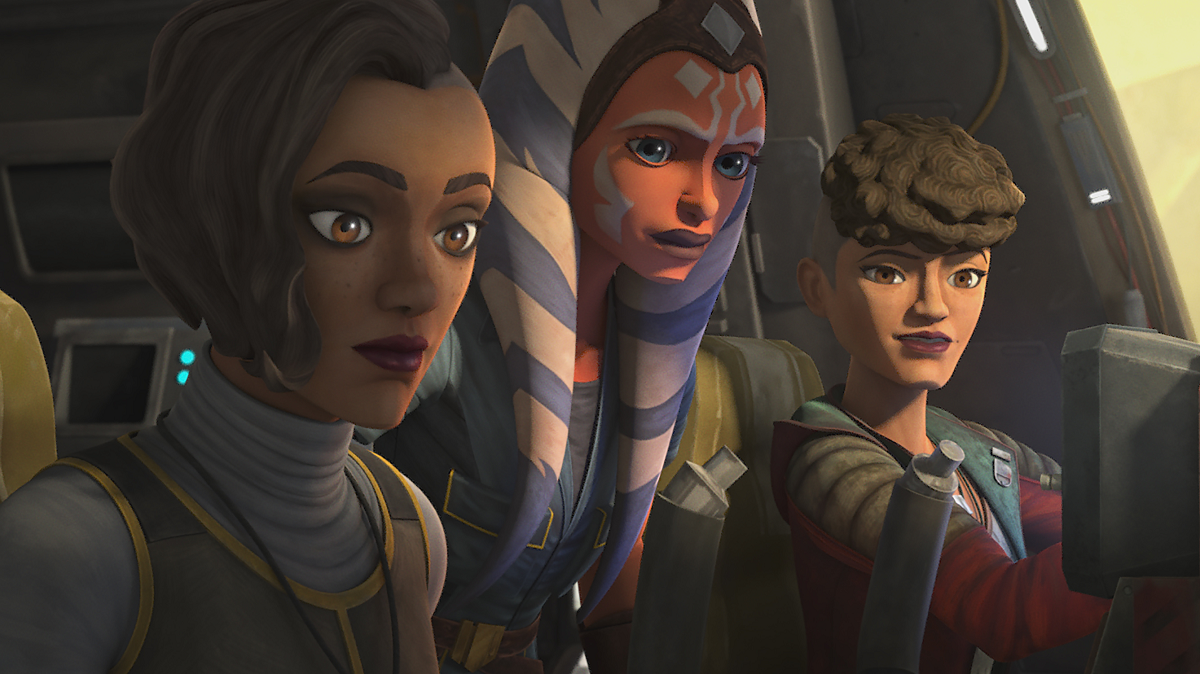 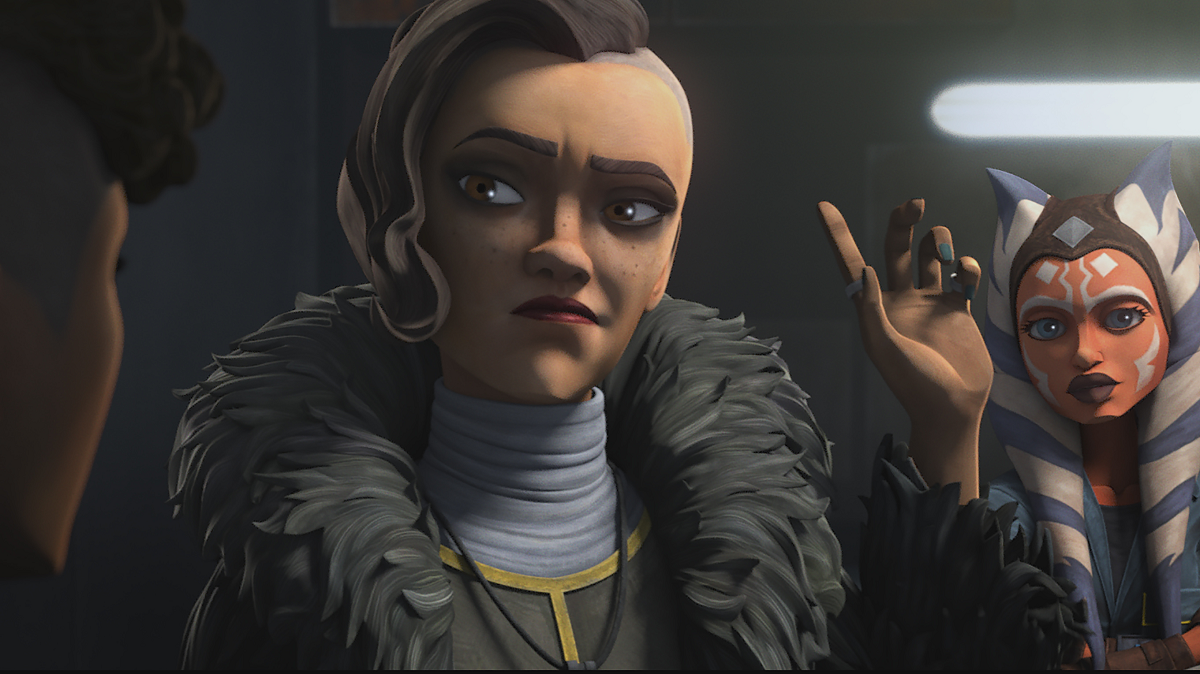 Okay, were back with more Ahsoka content and fresh off the news that Rosario Dawson will be playing the live-action version in season two of The Mandalorian. Im not here to dwell on that subject but for the record Im not super stoked about it, lets just say I had a different idea of how things would go.

Luckily, Ive got new animated content to worry about and this week on Deal No Deal the new team of Ahsoka, Trace, and Rafa find themselves in over their head

We start off in Traces shop where her and Ahsoka are working on her freighter. Trace notes that Ahsoka is quite comfortable working on starships and asks the name of that academy she went to. Ahsoka struggles to come up with a good name so she says, Skywalker Academy, not her proudest moment to be sure.

You can feel how awkward it is for Ahsoka to be having this conversation, but if shes going to continue to help Trace, whos inquisitive by nature, its bound to come up again. And further down the road, if shes determined to make a home on Coruscant, how long can she hide from her past?

We do learn more about Traces past and that her parents split, inheriting the hangar from them. She tells Ahsoka that Rafas shop is a front for her schemes and that shes had to work odd jobs to piece together what she could for the starship, which she named the Silver Angel

Trace is a good but clearly simple soul, theres no doubt about it, and split probably doesnt mean what we think it means. She convinces Ahsoka to stick around a little longer, at least until the Silver Angel is up and running. Ahsoka agrees but is concerned about Rafa, who shows up on cue.

Rafa tells them about a deal she made but her pilot, and ship, fell through so she needs Trace and the Silver Angel to complete this potentially lucrative deal. Ahsoka asks what the deal is and Rafa gives her the hush now vibe, finger and all. Its great seeing Ahsoka get treated like this, not because Im sadistic, but because we know what shes been through and to see Rafa put her in her place without knowing is funny to me.

Trace, whos just excited to go flying, goes to get the ship ready while Rafa pulls Ahsoka aside to have a chat. She doesnt trust Ahsoka and questions her motives as the tension between the two continues. Did Rafa really have another pilot/ship set up or was getting Trace to go along with-it part of the plan from the beginning? Rafa manipulates Trace, theres no doubt about it, but I believe her heart is a good one and a face-turn is coming no doubt.

So, the three of them head out and Trace, whos woefully unexperienced, heads straight into a military lane. It garners the attention of Admiral Yularen whos stationed on a ship just above orbit! He hails the ship, asking for their license, which Trace doesnt have, and orders them to state their names. Ahsoka tells her to ignore them and just get in a civilian lane. We then cut to the bridge where Yularen is standing with Anakin Skywalker! He asks who was aboard that ship and Yularen says its just some rookie pilots getting into trouble.

Now, we get a little Return of the Jedi moment as Anakin senses Ahsoka presence aboard the ship, and Ahsoka in return feels the Force calling her, feels Anakin reaching out. He tells Yularen its nothing and to forget about it. Trace makes for the civilian lane and takes off.

It was a great callback to a moment from the OT and its equally great to see that Anakin and Ahsokas bond is intact. If youre unsure of what Im referring to, its as the strike team heads for Endor through the Imperial blockade. Darth Vader, standing on the bridge of the Devastator with Admiral Piett, feels Lukes presence aboard the stolen Lambda-class T-4a shuttle, and like Ahsoka, Luke senses Vaders/Anakins Force energy. As we know, Vader allows them to pass and the rest is history.

So, they are on their way and the destination turns out to be Kessel! Rafa says shes arranged to pick up some medicine and it should be a big pay day. Ahsokas red flags go up when she hears where theyre going. Once on the ground, they meet Kinash Lock (Corey Burton), King Yarubas majordomo, who wines and dines them before they pick up their medicine which of course turns out to be unrefined spice, three containers worth.

This scene really puts on the display the major differences between the two sisters. Rafa comes across as the steady more streetwise one, while Trace is clearly wowed by the whole experience and comes across as naïve. Ahsoka, ever on alert and of course having experience in such things, raises concerns about the spices true intent. And since the Pyke syndicate is involved, theres no reason to suggest otherwise.

Her concern is warranted of course but with promises of a long-term contract, the sisters accept the deal and head out to pick up the spice. As they leave the elegance of the palace and the lushness that surrounds it, and enter the mining zone, the grim reality of their situation begins to take hold.

As they fly overhead, towards their landing platform, Trace is in awe of the amount of mining droids down below, Ahsoka tells her theyre not droids, but slaves, all different species, thousands of them. Rafa makes a comment about them probably being paid workers, Ahsoka is quick to correct her. Trace is clearly troubled by this realization.

Nevertheless, they load their three crates of spice and leave Kessel for Oba Diah, and the Pyke Palace. In case you havent seen it, Oba Diah appeared in a Season Six episode called The Lost One, a very important Clone Wars episode involving Sifo Dyas and Lom Pyke! Be sure to watch it if you havent already.

An argument breaks out when Rafa says the name of their client, Marg Krim (Stephen Stanton), the current leader of the Pyke Syndicate and all-around bad dude. Side note, Marg is the successor to Lom Pyke, the leader of Pyke Syndicate throughout the Clone Wars, and who joined Maul and his Shadow Collective.

Anyways, Ahsoka knows what hes all about and suggests bringing the spice somewhere else. During the conversation Ahsoka mentions that the Pykes arent to be messed with and will take your ship, even your life. Hearing that her ship may be taken, Trace suddenly gets very upset, after all, shes spent the better part of her life working on it, and its her ticket out of Coruscant. Next to Rafa, its the most important thing in her life.

While Rafa and Ahsoka are arguing about what to do next and who knows best, Trace jettisons the spice into space, for fear of losing her ship. Finally, Ahsoka and Rafa agree on something, that dumping the cargo wasnt a bright move. Now, with nothing to offer the Pykes, they must come up with a different plan or risk losing everything. Since they simply cant run away from their duties, they carry on with a plan Ahsoka came up with.

The plan basically involves giving the Pykes empty crates and hoping for the best, but when Krim insists on seeing the cargo before payment, Ahsoka must use a Jedi mind trick on him. It works, and they get their 30,000 credits, and they are almost up and away until Krims majordomo Fife (Dee Bradley Baker) interferes, demanding to see the spice.

They open the crates, finding them empty and demand to know whats going on, but Rafa and the rest fire up the Silver Angel and make a run for it as Fife calls in air support and engages the tractor beam.

So, surrounded by ships and locked in place, they have no choice but to surrender. 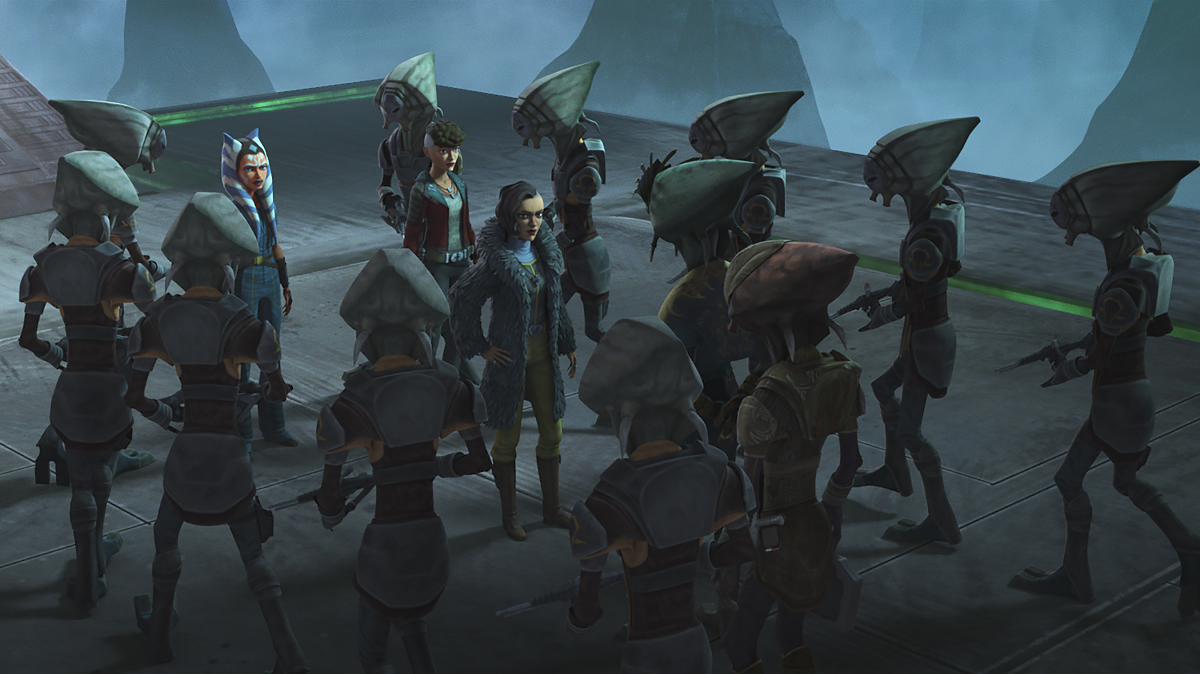 Folks have been dunking on these episodes but Im enjoying them, a lot. I love the pace, the lane building, and the character work. Rafa Martez, to me, is already a fully realized personality, and as a character is thoughtful, fleshed out, and voiced perfectly by Elizabeth Rodriguez. These two sisters represent the two sides of Ahsoka in many ways, that much is obvious. Trace, the more naïve hopeful side, akin to Ahsokas earlier days, and Rafa, well, its obvious shes the hardened streetwise one whos felt the sting of what real life has to offer.

The Ahsoka we meet later in life, during the Star Wars Rebels days, is a combination of the two, balanced if you will. For a while she lost her faith, but along the way finds it again and peace along with it. But shes learned that the Force has two extremes, and that shes more comfortable, more powerful, somewhere in the middle.

These expository character examinations are right up my alley, and for someone not looking for constant pew pews and lightsaber action, these are great episodes that I think will stick. This episode had lots of fun nods and winks that should keep most any fan engaged no matter what. We go to both Kessel and Oba Diah, two very famous planets in Star Wars history and we get our first on-screen appearance of Marg Krim, Lom Pykes successor.

Also, think about this, Anakin and Obi-Wan were on Oba Diah in a Season Six episode called The Lost One, so Ahsoka and the sisters arrived only weeks, perhaps even days later. Theres lots there to enjoy if you take the time to look!
As has been the case all season, the animation and score both continue to shine very bright, especially as we go off-world and visit Kessel and Oba Diah, which well see more of next week.

Speaking of, next Friday weve got Dangerous Debt

Ahsoka has managed to hide her Force powers for now but its probably time she let the sisters in on the act. Afterall, escaping the Pyke Syndicate while keeping both sisters safe will likely require more than the usual effort.

This episode will likely see the shift in the two Martez sisters, Rafa closer to Traces sensibility, and Trace closer to Rafas more shrewd side.