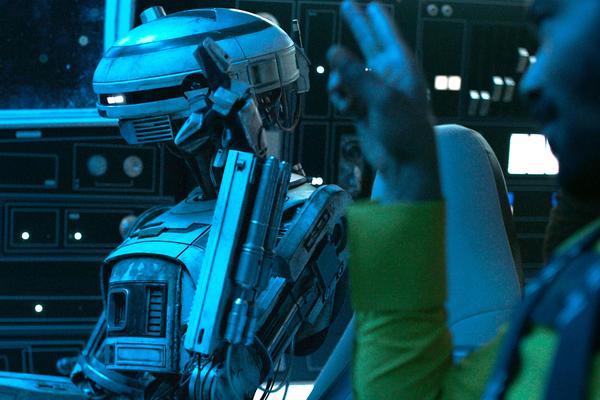 I think theyre both kind of self-made. And they get each other in that way.

Thats how Donald Glover described Lando Calrissians relationship with his partner droid L3-37 in Solo: A Star Wars Story. Hes speaking metaphorically about his galactic gambler character  but he means it literally about the robot.

The droid played via motion-capture by Fleabag star Phoebe Waller-Bridge belongs to no one and has constructed herself over the years, building upon and adjusting her original design.

Shes a self-modified droid, says Jon Kasdan (The First Time), who co-wrote the script with his father, Lawrence (veteran scribe of The Empire Strikes Back, Return of the Jedi, and The Force Awakens.) The idea is that shes sort of a mutt, if you will, of various parts of different kinds of droids who has improved upon herself.

Thats why the head floating above her shoulders like a mechanical jellyfish looks a little like the dome on a primitive BB unit, while her chest and shoulders have an R2/Astromech influence. (Her name, too, is a reference to LEET or l337, which is the practice of substituting numerals for letters in words.)

Shes a complete individual in the galaxy, Jon Kasdan says. We wanted to have it be a completely different kind of droid than youve ever seen in the movies. And we definitely wanted it to be a female. We thought it was more than time for that.

What Emilia Clarke says of her enigmatic character Qira also applies to L3: Han Solo is only surrounded by strong women.