Star Wars: The Rise Of Skywalker Has The Lowest RT Score, Does It Matter?

The romance of movies is not just in those stories and those people on the screen but in the adolescent dream of meeting others who feel as you do about what youve seen.

The movie doesnt have to be great; it can be stupid and empty and you can still have the joy of a good performance or the joy in just a good line.

Wherever you stand on critic scores and aggregate sites such as Rotten Tomatoes, they are here to stay and have become part of the Film/TV industry zeitgeist.

Movie critics in particular have been around since the early 1900s, and while the digital landscape has changed the game, the players arent likely to go away. And they are increasingly difficult to ignore if you participate in social media where certain folks have weaponized the data and engage in film and TV critical warfare.

With the latest entry in the Star Wars franchise, The Rise of Skywalker, officially becoming the poorest reviewed film to date (52%), passing The Phantom Menace (53%), does it matter? The 86% audience score says otherwise and while the box office numbers are below expectations, it has still made the folks at Disney a lot of Imperial credits.

And as far as box office goes, there are those that believe a fresh or rotten critic score on the online aggregator can mean big gains or losses at the box office, but there are studies that suggest otherwise.

A study done in 2017 by Yves Berquist, which you can read HERE, shows that there was no correlation (positive or negative) in 2017 between Rotten Tomatoes Scores and box office returns.

So, whatever the effect critics scores have on the viewing public, its negligible at best, especially when youre talking numbers on the scale that weve seen the last few years. Those box office numbers just arent comparable to anything else as Star Wars basically only competes with itself and a handful of IPs at this point.

The dollar amounts are so high in fact that some are calling the films running total of $1,032,361,535 a disappointment. A disappointment and disappointing are two completely different terms in this context, with one implying a failure of sorts, the other merely a letdown. This film didnt fail at the box office by any stretch, but it did underperform, two different things.

So, if weve got hard data that says it doesnt matter, then why are so many people fixated on it? Using the RT score to propagate their opinions on a film before theyve even seen it?

It likely says more about us as a society and the way we consume media, than the films themselves, but nevertheless, it has become a barometer of whats good and bad for many.

And in an era where critics themselves have become part of the story, often tailoring their reviews to garner clicks or elicit an emotional response, it becomes difficult to trust their integrity.

Remember, film criticism, when done correctly, is supposed to be honest, forthright, and most of all objective and even-handed. The best of them, despite being human, can judge a film by its worth without any preconceived influence.

And the film critic wouldnt exist if we didnt care what other people thought about a certain film, we all want to know if our opinions matter or not. Reading film criticism or discussing a movie with your inner circle can be part and parcel sometimes, its all about validation. The ugly side of course is when you use this tool as a means to divide and conquer, rather than engage in meaningful dialogue.

Ultimately, a films success, besides any future cultural impact, should be measured by asking these two simple questions, did the broader audience enjoy it and did it earn a profit. The answer to both with regards to TROS, despite what some folks on Twitter would have you believe, is yes.

Sure, there are a lot of people who didnt like it, but there are more who did, and its well past the point of making money for the company as weve already said.

So what are we really talking about here? Does it matter what critics think or what an aggregate site named after a vegetable says? Does it matter to you personally if a film doesnt make as much money as it was supposed to?

It doesnt matter to me, and I suggest it shouldnt matter to you either. Regardless of my personal thoughts on the film, I would never let anyone else influence my decision to see it or not.

And whether or not a film succeeds financially certainly has downstream affects and could decide if something similar or sequels gets greenlit, but thats not the case with Star Wars. Its not going away, ever.

I understand corroboration can be an alluring drug when you decide to go down that particular rabbit hole, with many seeking to validate their own personal opinion by looking to the masses for theirs, Im guilty of it myself. But that road is fraught with peril and when you begin to rely on critics, professional or otherwise, for justification, you lose the ability to critical.

There is however respite from all of this. Lucky for us, and the actual fun part, is that we get to make up our own minds every time we buy a ticket and sit in a dark theatre, watching the latest Star Wars film. Its our opportunity to drown out the noise of the world and just enjoy the films for what they are.

If in the end, your experience was less than youd hoped, at least you can say you bought a ticket and stood in line, rather than let someone or something else, talk you out of it.

So, what does everyone think? Should we not even fuel the fire with articles like this? Fanning the flames of the would-be naysayers who use RT scores to justify their love or hatred of a film? Let me know what your opinion is on this! 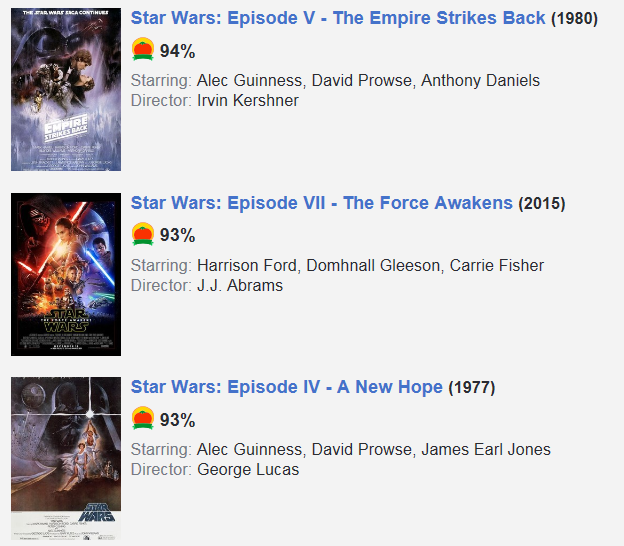 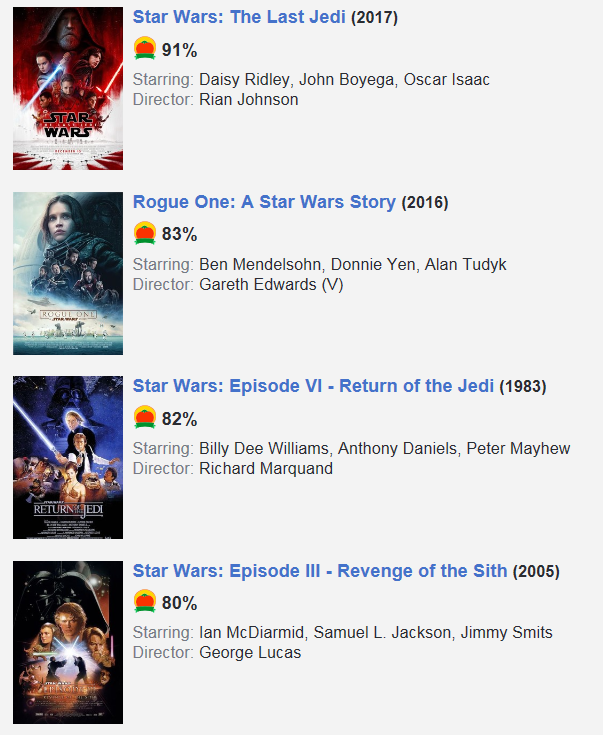 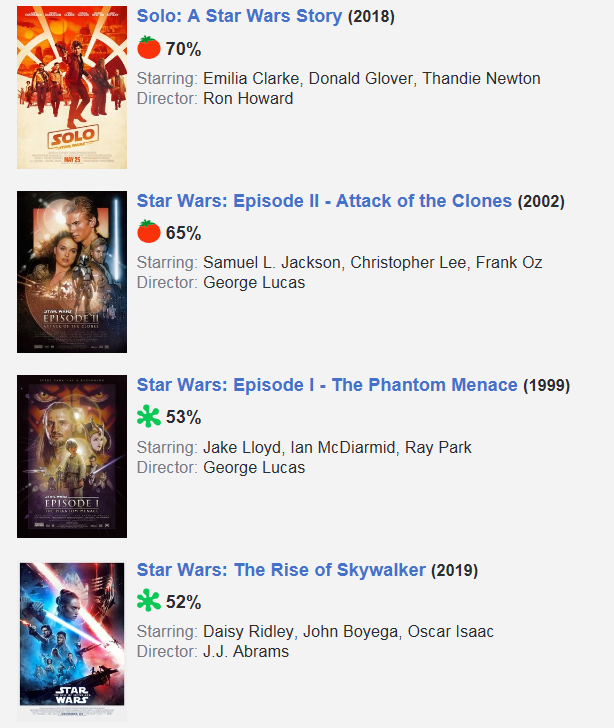