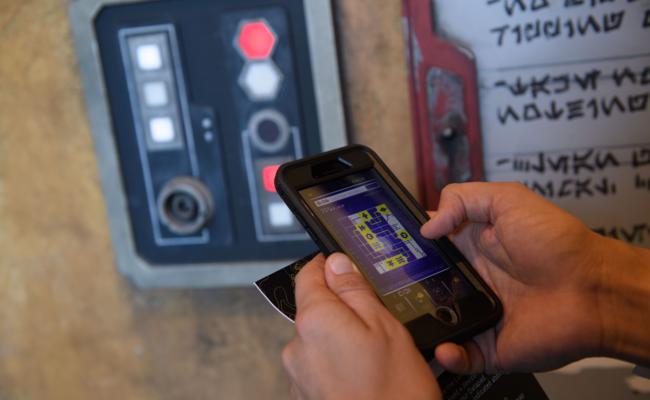 Star Wars: Galaxys Edge Invites Guests To Be Heroes Of Their Own Adventures In Groundbreaking New Living Land

In Star Wars films, exotic locales function almost like characters unto themselves, setting the tone for the adventures to come. In the same way, exploring the 14-acre Star Wars: Galaxys Edge will be an attraction experience all its own when the epic new land opens May 31, 2019, at Disneyland Park in California and Aug. 29, 2019, at Disneys Hollywood Studios in Florida.*

Star Wars: Galaxys Edge will come alive for guests as they play roles in their own Star Wars stories. Whether using the Play Disney Parks mobile app, encountering some Star Wars characters, or interacting with Disney cast members, guests can engage with this new land in ways never experienced before in a Disney park.

 Star Wars: Galaxys Edge is the first land in a Disney park designed from the ground up
to fully integrate with the Play Disney Parks mobile app.**

 When guests enter the land, they will be able to transform the Play Disney Parks app into their very own Star Wars: Datapad on their mobile devices. As guests earn galactic credits for things they do in the land using their Datapad, the credits will show in their Datapad profile.

The app will provide four primary functions to unlock a deeper level of storytelling within the land:


Guests can use the app to play a multiplayer game throughout the land, Outpost Control, that occurs several times daily:

 The First Order wants to install surveillance devices in door panels to spy on the Resistance, while the Resistance is trying to remove them

 Certain functions performed with the app may trigger physical effects within the land. Star Wars Characters Bring Batuu to Life at Disneyland Resort

 Rey, a hero of the Resistance, may be seen near the ancient ruins outside Black Spire Outpost. She is recruiting Batuuan locals and visitors alike to the Resistance cause.

 Several times daily, Supreme Leader Kylo Ren may appear at the First Order encampment at Docking Bay 9. With Stormtroopers in his wake, Kylo Ren will then march through Black Spire Outpost in search of the Resistance.

 Guests may stumble upon Resistance spy Vi Moradi in Black Spire Outpost as she keeps tabs on the First Order. Vi may pass on some tricks of her trade and ensure those she encounters know the Resistance is gaining strength.

 The mighty Chewbacca may be spotted in Black Spire Outpost or just outside the Resistance encampment in the ancient ruins of Batuu, rounding up recruits.

 First Order Stormtroopers patrol Black Spire Outpost under the command of Kylo Ren. They may snap the occasional order at guests or question them about the presence of the Resistance on Batuu.
Interactions with Disney Cast Members Take Story Immersion to a New Level

 Disney cast members working in Star Wars: Galaxys Edge can become part of the story, as local citizens of Batuu. They are encouraged to develop their own identities and personas within the stories of their roles, and to interact with guests.

 Costumes are modular, so cast members can pick and choose from a variety of options to create looks that best fit the personalities they want to portray while working in the land. They can choose from tunics, wraps, vests and more, and then augment their base costume with accessories such as necklaces, scarves and hats.

 Cast members who work in Star Wars: Galaxys Edge wear nametags customized specifically for the land, with names translated into Aurebesh, the written language in the Star Wars galaxy.

**Message, data and roaming rates may apply. Availability subject to handset limitations, and features may vary by handset, service provider or otherwise. Coverage and app stores not available everywhere. If youre under 18, get your parents permission first.