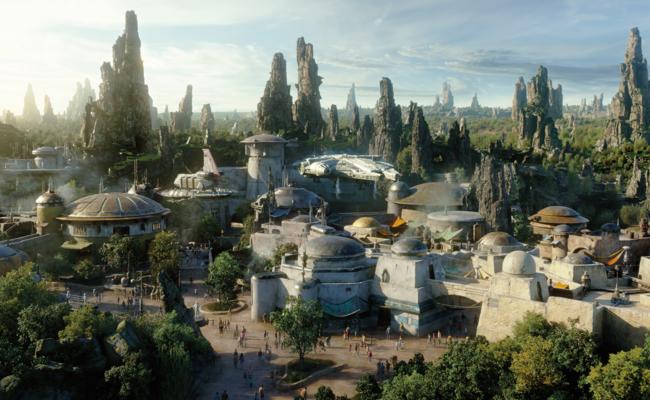 With more than four decades of films, television series, novels, comic books, video games and more, Star Wars has a deep history that has inspired generations of devoted fans. In creating Star Wars: Galaxys Edge, Walt Disney Imagineers and Lucasfilm were driven to fulfill the dreams of anyone who ever imagined visiting this galaxy far, far away by telling new stories that feel authentically Star Wars.

When Star Wars: Galaxys Edge opens May 31, 2019, at Disneyland Park in California and Aug. 29, 2019, at Disneys Hollywood Studios in Florida,* guests will find these lands filled with rich details meticulously researched and crafted by Imagineers and Lucasfilm. Though the planet Batuu and its Black Spire Outpost may be new to fans, this setting offers a genuine Star Wars experience for all who enter as they discover a plethora of hidden gems and other details drawn from across the galaxy.

Hidden Gems to Look for in the Land

While Star Wars: Galaxys Edge is set during the current trilogy of Star Wars films, the land features elements representing many different eras of the Star Wars universe. Examples include:

 Several creatures seen throughout the land will be familiar to some fans, such as the dianoga from the Death Star trash compactor in Star Wars: A New Hope found in a tank above a Black Spire Outpost drinking fountain, or the taxidermic wampa from the ice planet Hoth in Star Wars: The Empire Strikes Back in Dok- Ondars Den of Antiquities.

 A podracing engine in the Ronto Roasters market stall calls back to StarWars: The Phantom Menace, while the former smelter droid turning the spit of meats is similar to a droid seen in Jabba the Hutts palace in Star Wars: Return of the Jedi.

 A mural on the wall of Dok-Ondars Den of Antiquities depicts an ancient battle between the light and dark sides of the Force. The original bas-relief of this mural was seen in Chancellor Palpatines office in Star Wars: Revenge of the Sith.

 Batuus landscape is dotted with tall petrified tree trunks, and Black Spire Outpost takes its name from a trunk in the center of the village that is darker than all the others.

 Imagineers took rubbings from the feet of the R2-D2 droid used in Star Wars: A New Hope and turned those into a set of three-dimensional wheels. Then they built a trolley with those wheels and rolled it through the land before the concrete pathways fully dried to leave behind authentic droid tracks that guests might spot as they explore the outpost.


Its All About the Story

One reason Imagineers set Star Wars: Galaxys Edge on a planet never before seen in the Star Wars universe was to give everyone a chance to step into the story at their own levels  whether a guest is a lifelong Star Wars fan or has never watched a Star Wars film, everyone will be seeing Batuu for the first time.

 Batuu and its residents are starting to appear in and inspire other Star Wars stories:

 A five-issue Marvel comics series, Star Wars: Galaxys Edge, debuted in April and delves into some of the famous antiquities found in Dok-Ondars shop on Batuu.

 AlsodueinAugust,StarWars:GalaxysEdgeACrashofFatebyZoraida Cordova is a young-adult novel about two childhood friends from Batuu who are reunited later in life and have a series of adventures.

 The land was designed with sightlines that evoke cinematic angles. Guests begin with views of wide vistas, then as they explore deeper into the land, their field of vision narrows into tighter spaces  like zooming in for a close-up.

 In developing props and other décor for the land, Imagineers tried whenever possible to use pre-1980 materials to best capture the look and feel of the props in the first Star Wars films (Star Wars: A New Hope was released in 1977).

 To create the look of an older Hondo Ohnaka and properly capture the pirates personality for his Audio-Animatronics figure in Millennium Falcon: Smugglers Run, Walt Disney Imagineering consulted the characters creator, Dave Filoni.

 To ensure authenticity in their designs for the land, Imagineers also visited active Star Wars film sets in the United Kingdom. There they studied everything from ships to costumes to props to help inform their work on Star Wars: Galaxys Edge.

 In developing merchandise for Star Wars: Galaxys Edge, Imagineers were granted access to the Lucasfilm archives to study original props and costumes. In many cases, a special scanning tool was used to take 360-degree digital pictures of these artifacts, then 3D prints were made of new models for items sold in the lands.

 To re-create Princess Leia Organas iconic necklace worn at the end of Star Wars: A New Hope, Disney reached out to the original European designer, who still had the pieces mold from four decades ago. That mold was then used to create the new item, available now at Dok-Ondars Den of Antiquities.

 The soldiers ration kit offered in Resistance Supply is based off Luke Skywalkers kit from Star Wars: The Empire Strikes Back. Disney asked actor Mark Hamill (who played Luke Skywalker in the film) what he remembered was in his original kit and re-created some of those items in the version for Star Wars: Galaxys Edge.

 The Jedi robes and tunics available for purchase in Black Spire Outfitters are modeled after the costumes for Obi-Wan Kenobi and Anakin Skywalker in Star Wars: Revenge of the Sith.

 The interactive experience in the Droid Depot is inspired, in part, by young Anakin Skywalker tinkering with C-3PO in Star Wars: The Phantom Menace.

 The guest experience inside Savis Workshop  Handbuilt Lightsabers draws some of its inspiration from episodes of Star Wars: The Clone Wars, where Jedi younglings learn how to build their own lightsabers.