So What About This Kessel Run Anyways?

Good storytelling relies heavily on mythology, using classic tropes and characters to effectively translate a narrative to its target audience. The Star Wars universe is no different as its an excellent source of good old fashioned campfire storytelling built on 40 years of legends, folk heroes and folktales.

One of the big mythologies surrounding one of its biggest heroes was Han Solo and his infamous claim to Obi-Wan Kenobi and Luke Skywalker about his Millennium Falcons Kessel Run record. In this historic conversation, which took place at Chalmuns Cantina, Solo claims to have made the 18 parsec trip in less than 12 parsecs. 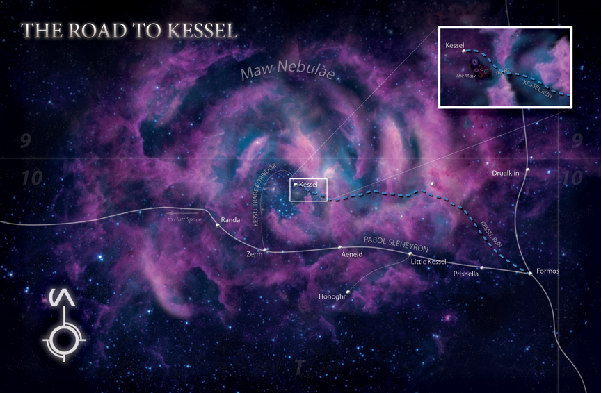 The Kessel Run was a route located within the Maw Nebulae that smugglers used to avoid Imperial entanglements when carrying spice or glitterstim from the mines on Kessel. The route itself was 18 parsecs long, but that distance could be made shorter by taking a riskier, more treacherous path.

Before we continue further, its important to note the differentiating views between canon and the expanded universe with the regards to the Kessel Run. The reason we mention this is because its starting to become clear Ron Howard will be exploring the Kessel Run in the Solo film so its important to know what we might expect.

Till now, the canonized interpretation of the Kessel Run is fairly simple and has been hardly mentioned on screen. Other than Han Solos unsubstantiated boast, its only been acknowledged once more since A New Hope. In 2015s The Force Awakens, we had this exchange between Rey and Han Solo aboard the Millennium Falcon

Rey: This is the ship that made the Kessel Run in 14 parsecs!

More currently, LEGO has released a slew of Solo: A Star Wars Story sets ahead of its release, one of which being a Kessel Run Millennium Falcon. This goes along with the fact that many believe images from the Solo trailer show the Falcon flying through what appears to be the Kessel Run, specifically The Pit, more on that in a bit. 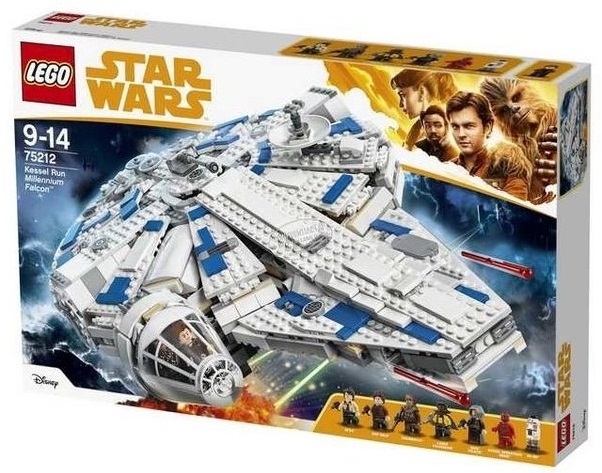 Most called BS from day one as a parsec is a measure of distance, not time, so many saw Solos boasting as nothing more than a cheap used car salesman trick. The script for A New Hope includes a line following Hans brag which says, Ben (Kenobi) reacts to Solos stupid attempt to impress them with obvious misinformation. Subsequently, the novel replaced the word parsec with standard time unit to clear up any confusion.

The Kessel Run has been mentioned in several other forms of canon Star Wars media but to date, it hasnt been explained fully or shown.

The Expanded Universe, or Legends, is a different matter. The Kessel Run has been mentioned in over 40 instances throughout the now separate Star Wars timeline and in greater detail. Its here we can discuss why its a much more dangerous option for smugglers and why, if successful, does shave a few parsecs off your time.

Kessel is a planet located in the Kessel System in the far outlying areas in the Outer Rim Territories. It was primarily a prison planet but was also the only source of glitterstim, a spice which was highly addictive and used for both medicinal and recreational purposes.

To get glitterstim off Kessel and to the nearby planet Formos, smugglers would often take the kessel run as a way to avoid Imperial Convoys who would patrol the sector looking for illegal shipments. The Kessel Run which was located within the Maw Nebulae contained two stellar bodies in particular which made the trip problematic, The Maw and The Pit.

The Pit was a narrow asteroid cluster located near Kessel, so its either at the beginning or end of the journey depending on which way youre headed. Its much easier to navigate than The Maw but can be just as perilous for distracted or tired pilots as the nebula can render sensors useless and pilots blind. Colliding with asteroids is a common occurrence and many ships incur heavy damages travelling through it.

The Maw is another issue and is shrouded in much more mystery that I wont get into here, just know that The Maw and its origins goes back to 1,000 BBY. We are not here to discuss Sinkhole Stations, CenterPoint Stations or the origins of the Death Star prototype, none of which stands a chance of appearing in the film, certainly not in any tangible way. Now, as far as the Kessel Run is concerned and how it might be depicted on screen, The Maw is a cluster of unstable black holes that are only visible thanks to the ionizing gases that are drawn to their gravitational pull.

Rather than merge together like most would, the cluster remains stable and the black holes remain spread out enough to make the trip through The Maw extremely difficult. This is where the mystery comes in as many believe an advanced ancient civilization known as The Ones are responsible for its construction. The Ones are more commonly known as the powerful force wielders The Father, The Son and The Daughter of Mortis.

The Kessel Run route is designed to give any pilots enough breathing room as to avoid the cluster and the gravitational pull from the black holes. A daring pilot with an extremely fast ship and technologically advanced nav computer could theoretically fly closer to the event horizons and shave parsecs off the 18 parsec route. This is the basis of Han Solos claim about the Millennium Falcon, that it is fast enough (Class 0.5), had the right navigational system (a juiced up Rubicon) and had the galaxys best pilot.

All three are required to pull this move off and I would also argue a bit of luck is essential as well. With Planet Kessel definitely in the mix for the new Solo: A Star Wars Story will we finally be witness to Hans crowning achievement? Hes been hanging his hat on these 12 parsecs for many years and along with other legendary Han moments, has a chance to finally see the light of day. But by doing so are they lifting the veil on something that has helped build the "mystique" that surrounds our favorite rogue? Perhaps there are some things that are better off not knowing.

Without having knowledge of the inner workings at Lucasfilm I perhaps wonder if maintaining the facade surrounding Hans famous run is more important to them? Maybe its best that we dont find out if he really did make the Kessel Run in less than 12 parsecs because that may alter our perception of the swashbuckling pirate. Believing is sometimes better than knowing when it comes to certain characters and certain events, thats how legacies are built.

But with all signs evidently pointing to Kessel being in the film, including a not so subtle tweet from Ron Howard a while back, it wouldn't be prudent to have Han smuggling for the Pyke Syndicate through the Kessel Run and not show the record breaking feat. As a wise man once said, if you make yourself more than just a man, if you devote yourself to an ideal, you become something else entirelyyou become legend.