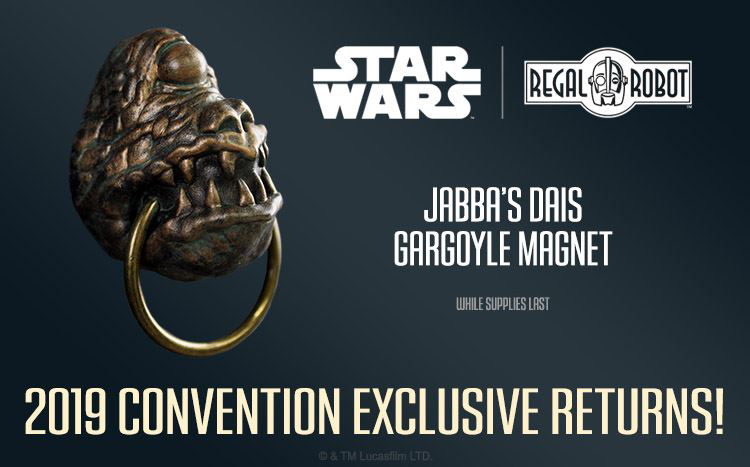 Its the return of our convention exclusive for 2019  a hand painted magnet based on the gargoyles in Jabbas Palace!

San Diego Comic Con will also mark the return of our 2019 convention exclusive Jabbas Dias Gargoyle magnet! Inspired by the gargoyles seen on Jabba the Hutts dais in Star Wars: Return of the Jedi, we make each one of these in our New York studio  casting, painting and finishing each by hand. First offered at Star Wars Celebration, we sold through our stock extremely quickly. We will have limited quantities for each day at booth 2913-E, and theyll be offered at a show-special price.

For fans who cant attend the show, were doing something very special! For a limited time, we will also be offering these popular sculpted magnets on our website! Thats right, during the days of the convention, July 17th  July 21st, fans unable to attend can order a magnet online from our website. We dont have plans for any other conventions for the remainder of 2019 and this may be your last chance to grab one. Join our newsletter list to be alerted to when you can order yours and be sure to check back on July 17th!

Well also have a lot of other cool stuff at the show. Folks can check out one of our now sold-out Life-Sized Chewbacca Busts, see and order our Tauntaun Maquette Replica: Phil Tippett Signature Edition, pick up a Space Slug Desk Organizer or find out how comfy the dark side can be when they sit in our Emperor Throne inspired executive desk chair!

Well have our cafe tables and director chairs on site, and for our Fett fans, well have a supply of our various Mandalorian Skulls! Han Solo fans can purchase our Carbonite Wall Plaques and for items we dont have at the show, or if something is too big for you to carry home, well also be taking orders on certain items for home delivery.

Our company founder, Tom Spina, will once again be speaking at panels during the show. Look for him at the Star Wars Collectibles Update panel with Lucasfilms Brian Merten on Friday, July 19th at 12pm in Room 7AB where hell be talking about some of the other exciting projects we have going for 2019 and beyond.

So if youre going to be at the show, please stop by our booth (#2319-E) or one of Toms panels and say hello! We cant wait to catch up with old friends and new, and look forward to seeing many of you there!