One of the coolest booths at this year's New York Comic Con was courtesy of our good friends at Lucasfilm who brought along a life-size version of the "Fireball" starship from their new show Star Wars Resistance.

Resistance, the new animated show from the mind of Dave Filoni, premieres tomorrow online and Monday night on the Disney Channel, follows Resistance spy Kazuda "Kaz" Xiono on the installation known as Colossus. One of the things the pilots do to kill time, earn credits and respect, is compete in very dangerous, heavily sponsored races which is where the Fireball comes into play. Masquerading as one of these racing pilots, Kaz is given the Fireball to use while he tries to gather intel on the First Order. 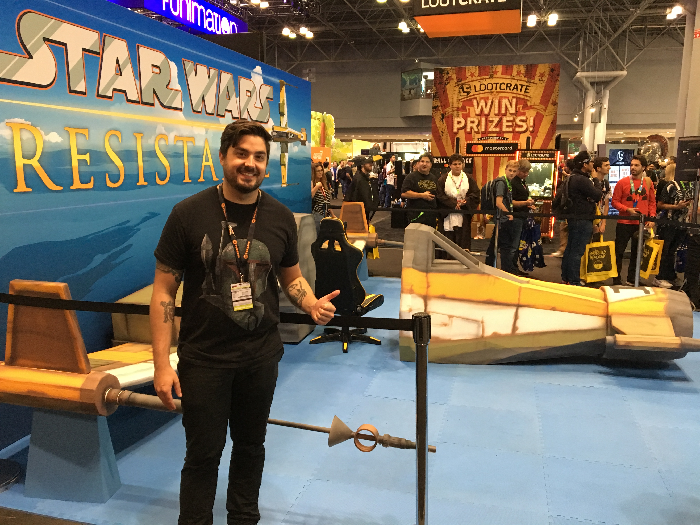 Lucasfilm's travelling events coordinator and all around good dude, Daniel Kennedy, was of course on hand to have everyone see this amazing recreation of the ship. Fans were lined up to "sit" in the cockpit or pose alongside for a once-in-a-lifetime photo opportunity. Kennedy who just brought the Fireball back from the Miramar Air Show in California, which drew 400,000, people was very happy to be indoors with air-conditioning. They of course can't be at every show so this time they had to choose between NYCC and AnimeFest and in the end Kennedy appreciates being at the conventions that give fans from all spectrums of pop culture get a change to experience Star Wars

"NYCC was nice enough to give us this amazing spot right here the main aisle. So, we were either going to be here or AnimeFest, but I prefer to be here, in amongst the big exhibits and experiential booths"

The Fireball, which is essentially a reverse World War 2 Spitfire ships in two large crates, is surprisingly light and only takes Daniel and his team one-hour to assemble. Made almost entirely out of foam, it is hand painted and remarkably detailed up close, which took the team three weeks to do. The best part is that it was designed to accommodate all types of fans including those who need assistance getting around.

I always love photo-ops and Ive been doing events for seven years, so I always think of people who perhaps use a wheelchair. Ive talked to people at shows who have special needs and they expressed to me how much they love doing experiences but physically cant. So, the best thing about this set-up is that it is able to accommodate anybody.

Stars Bobby Moynihan and Donald Faison were on hand, along with BB-8, to check out the Fireball for themselves and say hi to fans! 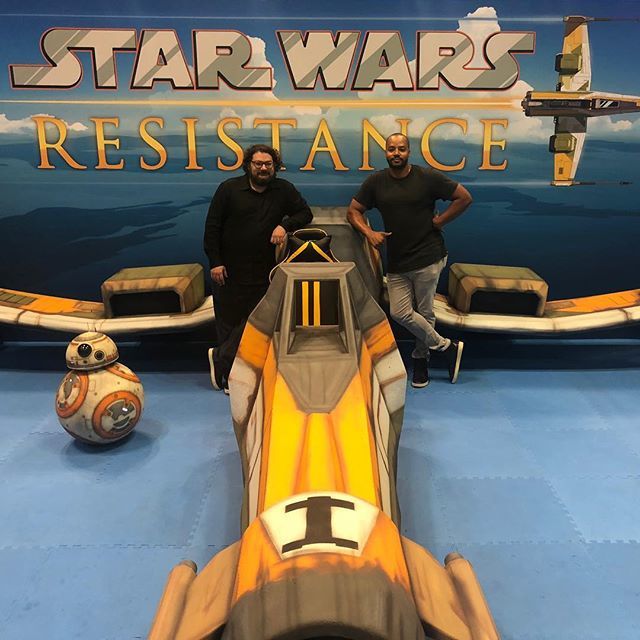 With NYCC still going today and tomorrow, head on over to the Lucasfilm booth (#436) and say hi to Daniel and take advantage of this great opportunity to sit in the cockpit of the "Fireball"! Who knows, maybe BB-8 will be there as well!