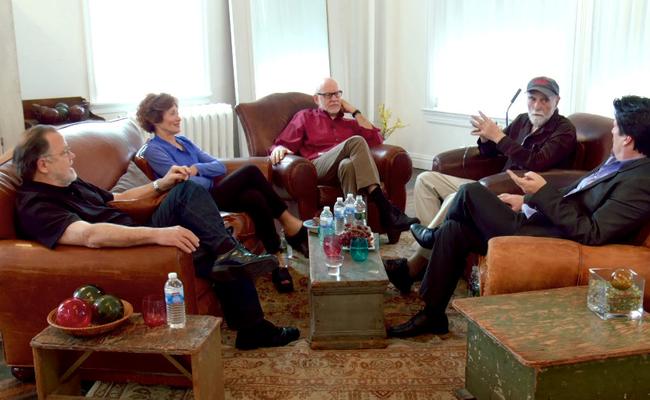 Frank Oz is known by Star Wars fans all over the world for his work as Yoda in the films. That little green puppet has captivated audiences of all ages for almost 40 years now.

But, there's more to Frank than just that Jedi master. For decades, he has been a talented writer, director, and performer on many films and television shows.

One of Frank's most famous endeavors is that of the Muppets with Jim Henson. He plays and voices many of the most famous characters from the series and the movies, and has helped shape the legacy of that franchise.

Mr. Oz has directed a new documentary, Muppet Guys Talking, which puts he and four other legendary Muppet performers in a room as they reminisce and tell stories from their days as Muppet performers.

We here at TFN had the chance to talk to Frank about the movie for our podcast, The ForceCast. Here is a portion of that interview:

TFN: One of the things that struck me about the documentary is that you dispelled the notion that the muppets were made for little kids. You even said that about Sesame Street. Do you think that mindset played into why the muppets were so successful?

Frank Oz: Yeah, thats the mindset we have all the time. I mean, come on now, when I was a kid I didnt know what I wanted. As an adult, how would I know what kids want? We dont know what kids want. All we can do is enjoy ourselves as adults. If the kids get it, they get it. Usually, the kids like to reach up--they dont like to reach down. When people make shows for kids, they usually think oh I gotta reach down and its patronizing. Its awful. So, I dont even consider kids, I just consider human beings, and we as adults have fun. Thats what we think about.

TFN: Its clear that the group in this movie has a lot of respect for Jim Henson. This movie almost felt like a love letter to his legacy. Did you make this movie in part because you wanted to honor Jims legacy and help younger audiences learn more about his genius?

Frank: No. No. Jim Henson is known around the world, and they know what an amazing human being he was and his genius. I think just by doing what we are doing, Jim permeates everything. So, theres no reason to narrow it down to just him.

The reason we did this is--matching my wife Victoria Lebalme who is the producer--she saw how us original guys would sit around and talk and egg each other on and annoy each other and care for each other and love each other and support each other and then annoy each other again. She said, this should be seen by a lot of people. Because shes worked in other companies, and shed never seen a work culture like this--which comes right from Jim. Only from Jim. Which is, all we want to do is the very best work we can do. Theres no ego, theres no backstabbing, there are no politics, theres no jealousy. There is only caring about each other, and having fun. And, thats all it is in order to get to the quality.

TFN: It seems in recent years, it has been a little difficult to capture that essence that you guys all had together. Do you find that there's a chemistry there that's just hard to recreate nowadays?

Frank: Yeah, I mean we've been together for, I think the newest member the baby of the group is Bill--who's only been with us for 26 years. We know each other so well. What people don't really understand with The Muppets is, it's not The Muppets, it's the people underneath The Muppets who have known each other for so many years and have such depth of experience and play and caring for each other, and that comes through the Muppets. So it is difficult, as you say, for that kind of chemistry, it can't appear instantly. Instead of making the cake in an instant, you've got to actually go get all the materials--all the ingridients, rather.

-
There is much more on the podcast, which you can check out by clicking here. Frank gets into his return as Yoda in The Last Jedi, more about The Muppets, and some funny stories as well.

Muppet Guys Talking is out right NOW, exclusively through MuppetGuysTalking.com. We have seen the film and give it 5 out of 5 stars. It is an enthralling look at the process of making these characters come to life. There is awesome behind the scenes footage and stories which have never been told in this way before.

Muppets fans are in for a treat, and even those who aren't huge fans can appreciate listening to legends discuss some of the most important entertainment ever made.

Go check out the movie and be sure to listen to our full interview with Frank on The ForceCast.