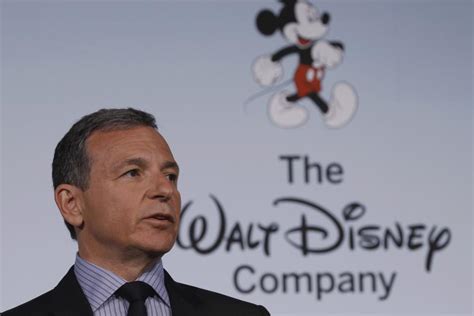 Bog Iger, the CEO of Disney Co., sat down with The Hollywood Reporter's Matt Belloni recently to discuss the current state of things. They discussed many things and when the topic of Star Wars came up, specifically the idea that perhaps the franchise needs to slow things down a bit in the wake of losses, Iger had this to say...

"I made the timing decision, and as I look back, I think the mistake that I made  I take the blame  was a little too much, too fast. You can expect some slowdown, but that doesn't mean we're not gonna make films. J.J. [Abrams] is busy making [Episode] IX. We have creative entities, including [Game of Thrones creators David] Benioff and [D.B.] Weiss, who are developing sagas of their own, which we haven't been specific about. And we are just at the point where we're gonna start making decisions about what comes next after J.J.'s. But I think we're gonna be a little bit more careful about volume and timing. And the buck stops here on that."

Interesting he used the word "mistake" when clearly referring to the release of Solo: A Star Wars Story and its proximity to Rian Johnson's The Last Jedi. The implication being Solo's losses are mostly to be blamed on the schedule and not the negative fan reaction to The Last Jedi and the quality of what's up on the screen.

He also says to expect a "slowdown" when it comes to Star Wars films but didn't say specifically what that meant. We of course know J.J. Abram's Episode IX is currently in production and due out next December but beyond that there are no other announced films on the schedule. Interestingly he mentions David Benioff and J.B. Weiss as having developed "sagas of their own" which is the first real indication they are working on more than one film although that was always the presumption. A glaring omission in all of this is Iger doesn't mention Rian Johnson's trilogy, which most of us expected to follow Abrams and begin in 2020.

Iger indicates they are at the point now where their making post-Abrams decisions and we have to assume shoring up Johnson's trilogy is a priority. It's been widely publicised that the company got a little tepid after Solo experienced losses at the box office and are rethinking their standalone strategy, but common thought is that the Johnson project was a go. There have been some rumors recently suggesting otherwise but that is just pure conjecture at this point. He indicated they are focusing on the "volume and timing" of releases so I wouldn't expect two Star Wars films per year anytime soon and look to Disney to lock up December slots only for the foreseeable future. And although it wasn't mentioned, we know Jon Favreau's live-action Star Wars series, set to debut with their streaming service, is a major focus for the company, spending roughly $10 million+ per episode.

Finally, on a lighter note, Iger was asked about the recent decision to service alcohol at Disneyland publicly for the first time when Galaxy's Edge opens its doors next year, and what Walt Disney himself would have thought about breaking the longstanding rule...

"We have to be careful we don't let people drink and then go on Autopia (laughs). Yeah, except I think Walt had a nip or two in his apartment at night. I am a big believer in tradition. This just seemed like one of those traditions that if we changed it the empire wasn't gonna crumble."

So, what does everybody think? Is Iger just choosing his words more carefully or do expect to see big changes with regards to possible future Star Wars films? Let us know!

To read the full article at The Hollywood Reporter, click HERE.