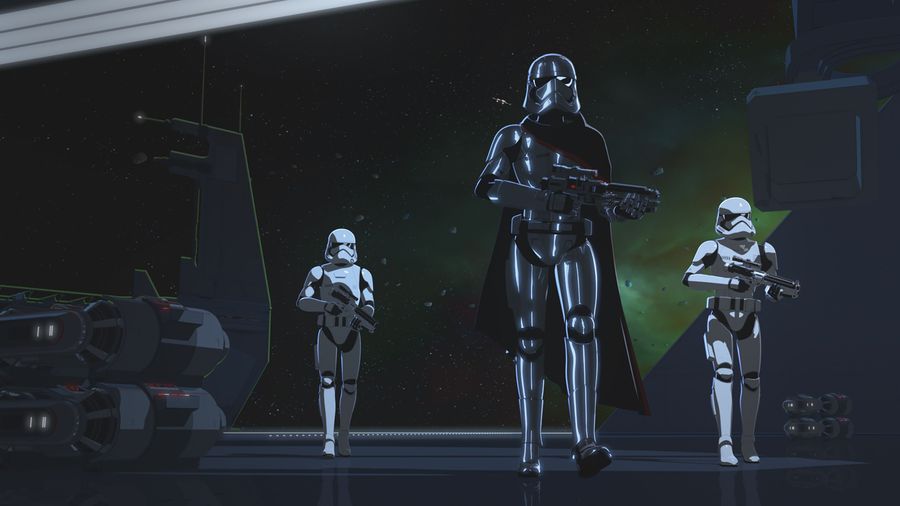 The final episode before the mid-season break starts off in the Fireball shop with Bucket questioning why Yeager would let Kaz take the Fireball out on a mission. Bucket is concerned because the Fireball isnt flight worthy and knows Tam will be furious. Tam joins the conversation and informs Jarek that the ship is missing some stabilizers, which is the reason she didnt want Kaz to fly it. Yeager mistook her anger for possessiveness.

Cut to Kaz and BB-8 who are rendezvousing with Poe Dameron and the rest of the Resistance somewhere in deep space. He is hand delivering the information he downloaded from Captain Dozas data pad last week. As expected, the Fireball runs into problems and everything starts to malfunction, Kaz is panicking.

Just before the Fireball explodes, Poe and the Resistance show up, lock onto Kaz with a tractor beam and guides him in safely to the hanger of their CR90 Corvette.

Relieved to be on board, Kazuda and BB-8 run into Poe and CB-23 and they all have a nice reunion, including a sweet little moment between love-droids BB and CB.

Kaz shows Poe the encrypted data-stick and Poe tells him hes doing a great job and that General Organa herself is on board and wants to see him personally. Kaz hands over the intel while Leia informs them both that his reporting on Colossus has led to the discovery of First Order flight paths in the Unknown Regions that may lead to a potential outpost. 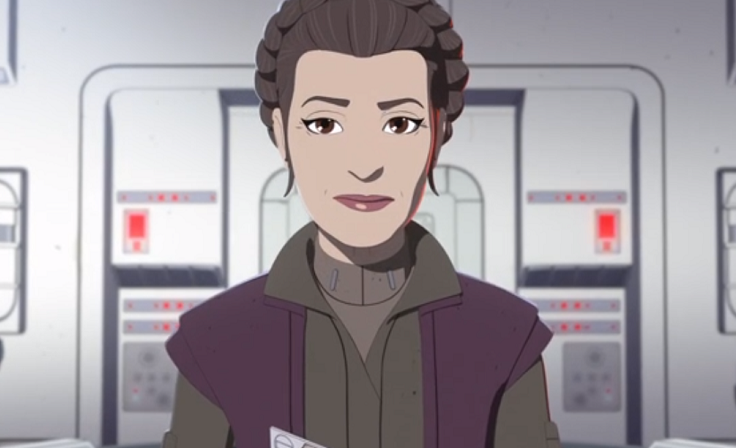 Their mission is to find this outpost and see whats going on there. Leia reinforces with Poe that this is a reconnaissance mission only, and under no circumstance are they to engage the enemy. Poe begrudgingly agrees with a hint of that Dameron sass.

They pass a series of buoys, marking a clear path, indicating theyve found something. Just as they pass through them, they start to get indications of something larger ahead. They find themselves in a middle of an asteroid field and just ahead see the outpost their after, embedded into one of the larger asteroids. They detect no lifeforms or active droids, so Poe makes the decision to land and check out the station. Kaz doesnt like the idea but goes along with it as ominous music plays.

Theres nobody around but fearing the First Order could come back, he orders CB-23 to take their X-Wings out to the asteroid field and wait for his pickup call. They begin to look around the huge, but empty station, trying to ascertain what its for. They come across a computer terminal and get BB to plug in and learn what he can. He tells them that the station isnt abandoned but that its being prepped for demolition. At the same time nearby droid activates and they are forced to fight it off and destroy it, setting off a silent alarm that went straight to Captain Phasma. We cut to Phasma who has summoned Major Vonreg and informs him theyll be going to the station personally to see whats going on and oversee the demolition.

Meanwhile, CB-23 is out in the asteroid field waiting and she spots the arrival of the First Order, who have arrived in record time, she immediately tells BB-8 who tells Poe and Kaz. Captain Phasma arrives with a lot of stormtroopers who are carrying a whole whack of explosives, intending on blowing up the station as planned. Vonreg and his squad remained outside, patrolling.

Despite the First Order arrival, Poe and Kaz eventually make their way to a control room and begin investigating what the station is used for. Kaz and BB-8 are very nervous and want to leave but Poe is determined, like always, to find out whats going on. They figure out that the station is a mining and processing facility and they are extracting the mineral Dedlanite from the asteroid its attached to, and lots of it. Poe tells Kaz that Dedlanite is used to power blasters, and in this case, a lot of blasters. Having gotten what they came for, Poe tells them its time to leave and calls CB-23 for a pick up.

As they are leaving, they run into some troopers who are looking to stage explosives. Before long, they are surrounded and Poe, staying relatively calm, warns the troopers it would be a mistake to fire upon them while getting Kaz ready

Poe backs them into a corridor and shoots the control panels on a couple of blast doors cutting them off. Before they run, he shoots the explosives setting them off, presumably killing a few troopers along with it.

A chase ensues though the hallways and Poe and Kaz get separated as they head for the hangar where CB-23 should be waiting for them. Poe runs into Captain Phasma, who is a terrible shot, and is forced to find another way to the hangar. Both parties end up overhead the hangar, running along parallel catwalks, and Kaz helps Poe by using some machinery to destroy the catwalk cutting of Phasma and the troopers. This is an excellent sequence with great camera work and really shows off the enormity of the station.

So, while still under fire, they make it to the hangar and board their X-Wings unaware Vonreg and some Ties are waiting for them. They get into a cool dogfight and if not for Poes skills, Kaz wouldve surely gotten destroyed. Just as things are looking bleak Vonreg has them in trouble, Phasma orders her Major to back off saying, If you dont break off now, youll die with them having ordered the detonation of the station.

The station explodes in a huge burst and the radius and aftershock catch up to Kaz who disappears into the plume. Poe doubles back to look for Kaz who isnt responding, and I fully expected the episode to end with Kazs whereabouts and fate unknown. However, Kaz was using a nearby asteroid as a shield from the blast and Poe is understandably both impressed and happy to see him. They head back to base. 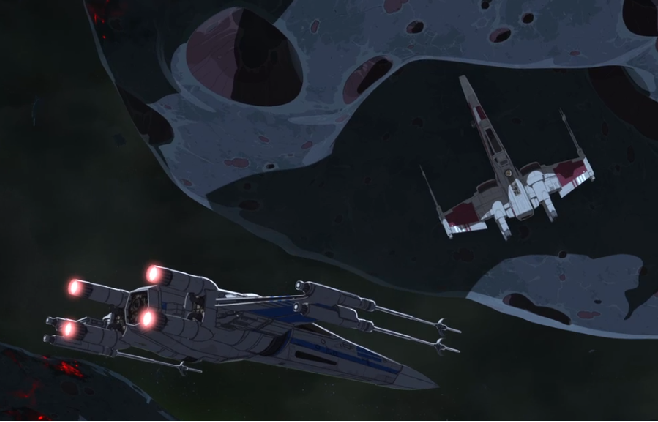 They tell General Organa about the First Orders mining operation and they fear even this information wont be enough to sway an already corrupted Senate. Leia of course has dealt with them before, being a former Senator herself, and knows many of them are profiting from this scheme, they cant be trusted. However, shes keenly aware of the threat the First Order imposes and is glad to know this information, nonetheless hoping it will convince others to join the fight. The end.

Pretty great and exciting way to enter the mid-season break. While light on exposition, we got to see Phasma, Vonreg, Leia and Poe all wrapped up in a real action filled episode that took us into the Unknown Regions. It seems that they are expanding their reach a little and its for the better as they cant center every episode on Colossus.

The Poe/Kaz combination seems to be a good one as the last time they were together was Signal from Sector Six and that was also an equally great episode. Also, the more CB-23 the better.

While Phasma turned out to be a bad shot, it was great seeing her in action as opposed to just images and holograms. And while not a huge reveal, the Dedlanite find is all part of the larger picture that we know the First Order to be. Thats a nice little angle this series employs, we the audience, are of course steps ahead of the characters on screen so its fun watching them find out things we already know.

Just how much the show will reveal to the characters is yet to be seen however and with the show getting perilously close to the events in The Force Awakens, somethings gotta give soon. Which makes me curious though that Kaz didnt discuss with Poe the biggest reveal of the season from last week, Captain Dozas direct connection to the Empire. Seems like an odd thing to keep from Poe unless Kaz wants to learn more before presenting it to Resistance.

So, theres no episode scheduled for the foreseeable future and as soon as we know something, well post it. All we know is that there are 11 more episodes to go in this first season and with so many things set into motion, it should be an exciting second half.