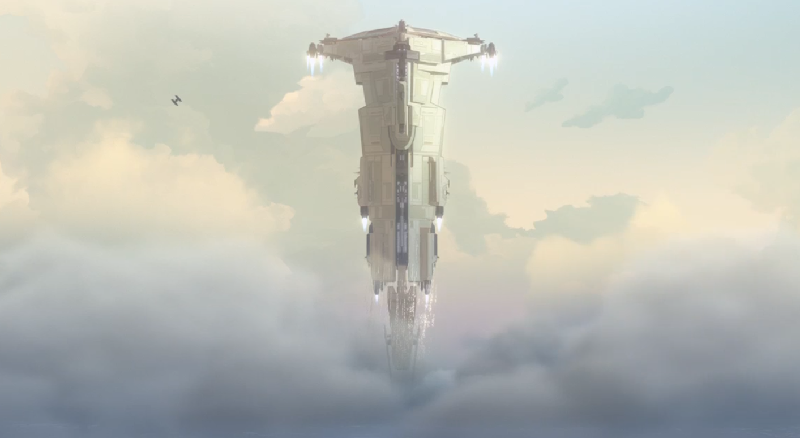 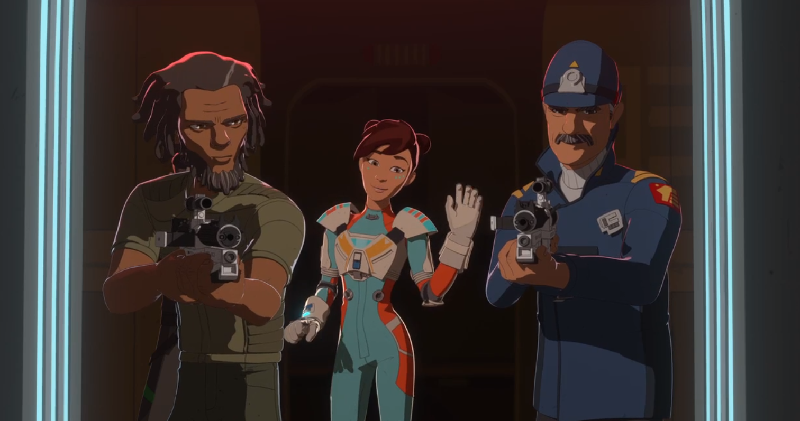 We have come to the end of Season One of Star Wars Resistance and even though its the first season, the veteran staff made sure it didnt feel like it. In fact, dont let anyone tell you that this season of Star Wars Resistance didnt end on a high note, because it absolutely did. And you can tell that everyone involved wanted to ensure we had lots to think about over the next few months while we wait for Season Two to start.

The framework and strategy of this 22-episode arc has all come to fruition and paid off big time in what can only be described as one of the best premiere seasons for a Star Wars show, ever. Every episode, certainly since the mid-season break, has been full of exquisite action sequences, tons of exposition, beautiful artwork and strong performances. I really enjoyed this last episode and might be premature in saying but in many ways, especially when you pair it with No Escape: Part 1, its the best episode of the season. But more on that in a bit, lets dive into the episode itself.

Since its a two-parter, we are immediately put right back where we left off last week with Kaz and Torra watching General Hux deliver his infamous speech while the Hosnian System is destroyed. Last week, we were all wondering how Kaz would respond to such atrocity? Well, with the help of a very sympathetic and strong Torra (who is a warrior by the way), he takes a firm hold of his grief and turns it into action. True courage is at work here folks and Kaz now more than ever, is his own man.

So, as was the plan from the get-go, they make their way to Yeager and Captain Doza who are still sharing a holding cell. There is a happy reunion for Torra and her father, but Yeager right away picks up that Kaz is suffering on the inside. Kaz tells them about Hosnian Prime and Yeager shares in his pain as he too has lost family, for different reasons, but loss can sometimes be a powerful and shared experience.

They tell Captain Doza about their plan to fly Colossus away from Castilon and hes scared of the risk to the station which he says hasnt been flown in twenty years. They are interrupted by a pair of patrolling troopers who walk by and notice the cell door is open. They surprise attack the troopers, take their weapons, and then stun them leaving them behind.

Back at the terminal room, Neeku, the Chelidae, the children and Bucket are determining how to flush the water out of the station, something the need to do to get the station airborne. They realize that by doing that they could also flush out the First Order troopers at the same time, so its up to Kaz and Torra to get the troopers into key positions.

With everyone in position the plan goes into action but thanks to some miscommunication, Neeku opens the doors too soon and Kaz almost gets caught underwater. Hes safe, thanks to CB-23 who continues her streak of saving everyone, and the plan works as we see Troopers getting jettisoned out into the ocean depths. Just then, Vilpac (Chelidae) tells Neeku about an incoming transmission from Aunt Z, but more on that in a bit.

Back in Captain Dozas old office, Agent Tierny is there telling Pyre he is losing control of the station and to call in reinforcements. She plans to take Tam off-world back to their base. As they leave, a hiding Yeager and Doza sneak in and Doza gets to work gaining control of the station again while Jarek plans to stop them from taking off with Tam. Remember, Yeager and Kaz still think they are holding her against her will, which, they sort of are but kinda not really?

Pyre, Tierny and Tam make their way to a landing platform where a First Order shuttle has just arrived to pick them up and take them back to base. Tam sees the shuttle and looks horribly afraid, confused and overwhelmed. The show does a great job of making Tam seem very small and afraid here, clearly she's in over her head but is so mixed up right now emotionally, she's relying on her instincts at the moment.

Kaz and Yeager show up, blasters pointed, and begin to try and convince Tam her to stay. She berates them again for lying and betraying her and is very hurt, especially by Jarek, who she says was like a father to her. More troopers show up and surround both Kaz/Torra and Yeager and are ordered by Pyre to drop their weapons as they have seemingly lost.

Finally putting their plan into action, Kaz orders Neeku to fire up the station and launch it into the air. The massive disruption causes many of the First Order ships to fly away and some of the Troopers fall off the platform as the entire station is shaking from the stress. The remainders begin to fire on Kaz, Torra and Yeager and CB-23 does her usual thing of saving them again.

The First Order shuttle returns to pick up Pyre, Tierny and Tam as Yeager makes one last desperate attempt to get her to stay with them. She doesnt. Tam takes one last look at Jarek then takes off with Agent Tierny and the First Order. Thats the last we see of them this episode. 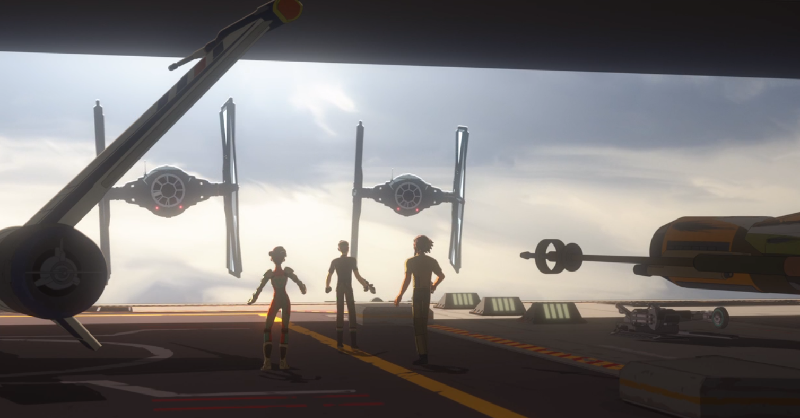 With work to do, the remaining Aces still locked up are freed by Captain Doza and launch to defend the station. Kaz, Torra, Yeager and the rest head to the hangars to unlock their ships that have grav locks attached but are interrupted by a pair of Tie Fighters, weapons armed and ready. Remember that transmission from Aunt Z earlier? Well her and Hype Fazon have returned to help after receiving Kazs distress call and take out the two Ties and engage the rest.

We finally get the aerial dog-fight weve been promised all season long and just in time as Captain Vonreg shows up with more fighters. Doza, from his office, activates the stations cannons to help but they are falling behind and getting a little overwhelmed by the First Order. But, theres more help on the way, this time in the form of Synara San, Kragan and the pirates! If you remember, they too intercepted Kazs distress call, and having no love for the First Order, it appears Synara has convinced them to help.

But, the First Order isnt done yet and they have one last play, a Star Destroyer. Sensing its time to go as they are severely outgunned and outmatched, Kaz knows its time to get aboard the station get off the planet immediately.
So, with Colossus heading towards the upper atmosphere, Kaz sends Neeku some coordinates to punch into the nav computer. The destination? DQar! Neeku comments that it is mostly uninhabitable but Kaz tells him that the Resistance have a secret base there. Remember, this takes place pre-The Last Jedi where Captain Canady destroys that particular base with the Dreadnought.

Meanwhile, Yeager is in deep trouble with Vonreg hot on his tail, but Kaz does some very fancy flying and blows up Vonregs red Tie Fighter! Is Vonreg dead? Tough to say but there is a Vonreg LEGO set coming if that hints at anything.
So, with the coast mostly clear, all the Aces and pirates land their ships on the platform and Neeku punches the hyperdrive! Michael Taveras score here is incredible as we see all the different players looking out into that familiar hyperspace tunnel celebrating.

Neeku, Torra, Jarek, CB-23, R23-X9 and Bucket all join Kaz in the hangar as they are watching the stars whiz by. They are understandably joyous at having escaped and all ask Kaz where they are headed. He is telling them about DQar when Neeku interrupts and tells him he didnt have time to enter all the coordinates he gave him, so they really have no idea where they are headed! Kaz says that as long as they all stay together, they will be all right in end and then eludes to a missing Tam.

The end of Season One. 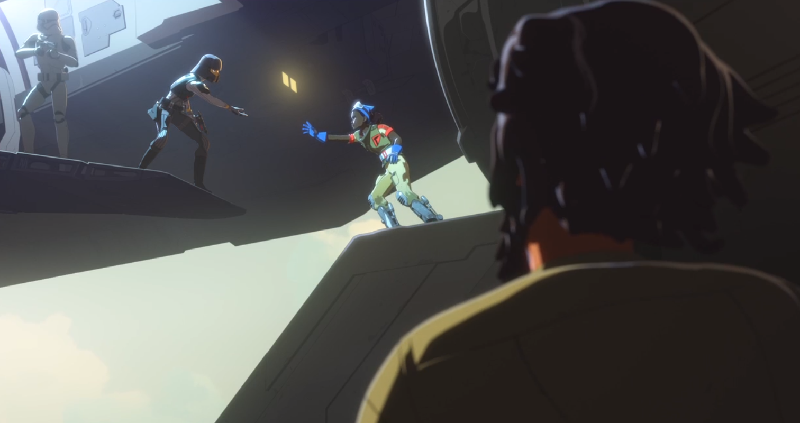 Wow. We have so many questions to mull over during this break. Is Captain Vonreg dead? Where will the Colossus come out of hyperspace? What does Tams future look like? Can the group and the pirates co-exist? Will the First Order even chase them, or do they have other things to worry about?

With the show returning before the release of Episode IX, dont expect too much crossover there at all. In fact, expect to see Season 2 parallel The Last Jedi the same way Season One did with The Force Awakens.

Itll be interesting to see if they make it to DQar at all before Captain Canady and the First Order destroy the Resistance base. Another unknown is whether the writers will have them travelling around from system to system or will they have the Colossus stationary again? What I found interesting was when Captain Doza said the station hadnt been flown in twenty years. Is it possible hes the one that few it to Castilon in the first place after the war? With so much to learn about Doza, the station, and all the rest, next season is full of opportunity to go back in time, now that we have a base understanding of who these characters are.

Tams decision to go with the First Order all but guarantees well get more of Agent Tierny and Commander Pyre in Season Two, at least in the beginning anyways. My guess is, the longer shes with them the more shell realize theyre not the peacekeepers they claim to be. My faith in Tam making the right decision eventually comes from the fact that I believe she is a good and decent person deep down who is just hurt right now, that will pass. But I maintain that we will see her wearing a First Order uniform, I hope Im wrong!

And finally, what about poor Flix and Orka who are still stowed away in their crate waiting to be shipped away? I think theyre in a for a surprise when they peek outside for the first time.

So, what did everyone think of the season? I thought it was a great start and a perfect ending. I love the Star Trek Voyager/Quantum Leap vibe Im getting from the ending and would love to see them explore different parts of the galaxy with this crew. Threads like the Pirates and Tam make travelling too far away a little complicated so theyll likely end up somewhere, but I wouldnt mind at least a few episodes of them being "lost in space"

Since theres no next week, Ill just say see you in the Fall Resistance fans!

Dont forget, many of the stars from the show will be attending Star Wars Celebration so check the schedule to find out all the details.