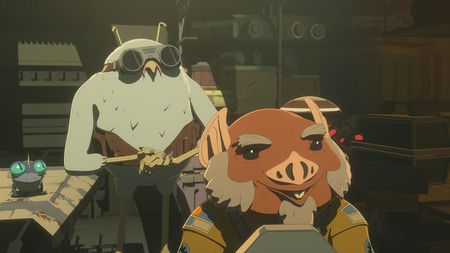 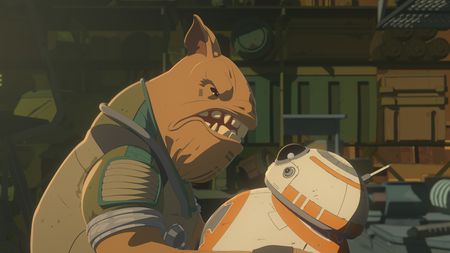 "In exchange for parts, Kaz minds acquisitions for Flix and Orka and comes into conflict with a shady alien customer in league with the First Order."

This episode is a fun one to be sure but as far as advancing the overall plot, its a little light on substance. As I discussed earlier in the season, the show employs a little audience participation because we know more than the characters do. We know what lies ahead for Kaz and the rest of them, what the First Order is up to, and what each little bit of intel means.

There are certainly some unknowns, especially with new characters, but the overall goal of getting this series deep into the events of The Force Awakens is something we are in on. So, when we spend 80% of an episode getting to the McGuffin of this particular frame, and that factoid ends up being underwhelming, the 80% better be great. Unfortunately for Dangerous Business, while there are some genuinely funny moments along the way, its not a great entry.

Now, Im not one of those fans who screams foul every time Im not thrilled with an episode. Im of the frame of mind even not great Star Wars is still good Star Wars. My specific issue with this show is that Im not in love with its lead character Kazuda yet, and this episode is all Kazuda. Im more in love with the shows supporting characters including Tam Ryvora, Synara San, Jarek Yeager and Captain Doza, who I find infinitely more interesting at this point.

This absence of appeal for Kaz may be a mechanism of the show, employing a slow burn approach for him. But its no coincidence his finest performances have been with Poe Dameron, a well established character, and when more serious stakes were on the line. And he is gaining confidence each week learning new skills along the way, which should shape him into the leader Colossus will most likely need very soon.

But, we did get more from Orka, Flix, and the breakout stars of this episode, Bitey the gorg and BB-8. And I enjoyed the sass from this weeks villain so theres definitely enough here to make it watchable. I just wish they would scale back on the gags and humor, which seem to be getting more frequent as the weeks move along. Are they softening us up for something infinitely more dangerous?

We start off in the shop with the gang finding Kaz working on the Fireball with a bunch of parts he acquired from Orka and Flix. He was able to get these parts by agreeing to mind the Office of Acquisitions counter while they are off world on a short trip. Seemingly never apart, the duo is going to visit Flixs mother and before leaving, give Kaz the shop rundown. Two of those particulars include not selling anyone anything from the back room, ever, and watching over their pet Gorg, Bitey. Well get back to Bitey in a bit.

The pair, along with GL-N, leaves and its not long before Kaz encounters a mysterious customer named Teroj Kee from the minding guild. Kee hands Kaz a very long list of parts hes after including an expensive and rare phase connector. Following the direction of Orka and Flix, Kaz refuses to sell it to him but makes a deal for the rest of the list.

Kee insists that Kaz deliver the parts personally to his loading area which turns out to be a trick. Kaz is trapped in a loading crate destined for incineration and Kee heads back to the shop to steal the phase connector. Good old BB-8 does his best to fend of the much larger thief, and even gets the upper hand at one point, but in the end Kee gets his way and the connector.

Kaz has plans to stop the deal from happening but goes form spoiler to stowaway as Kees freighter takes off. Kaz decides scuttling the ship is the best way to prevent the First Order from getting the phase connector, even though hes not sure what it does yet. 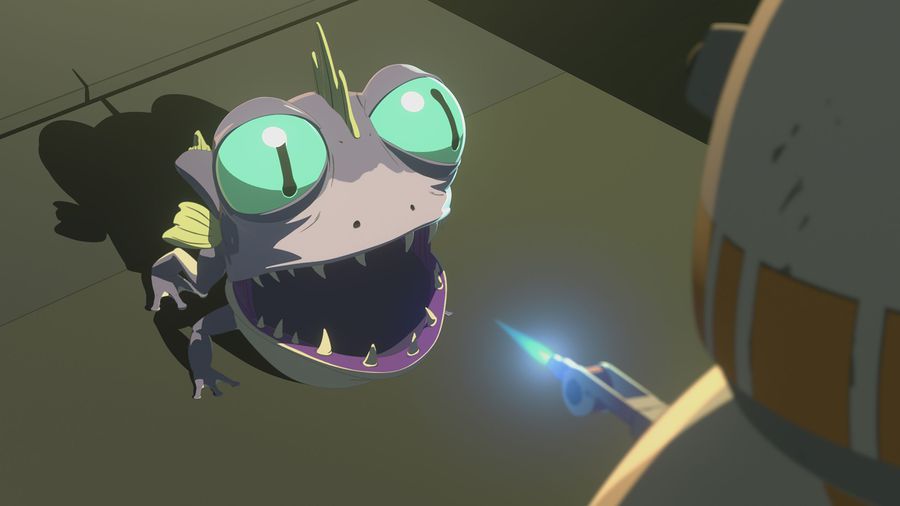 Remember Bitey? The troublesome pet gorg of Orka and Flix that was left behind for Kaz to watch over? Well, normally a nuisance, his persistent and painful habit of biting fingers and hands finally becomes an asset. Kaz finds an electrical panel that hes sure will sabotage the ship, so by waving his hand in front of it, he is able to bait Bitey into jumping at the wiring, teeth first. It has the desired effect and the ship goes down into the ocean.

Kaz climbs into an escape pod and takes off just in time to watch the large freighter sink into the water below. Teroj and the troopers also escape in some pods and he is contacted by Commander Pyre who tells him Captain Phasma wont be pleased.

Back at the shop, Kaz is frantically cleaning up the shop before Orka and Flix return. He tells them exactly what happened and that he destroyed an entire ship rather than let someone get away with their unpaid merchandise. Turns out Teroj has been a pain in the butt for Orka and Flix for some time, trying to steal form them for years.

Orka and Flix explain to Kaz what a Phase Connector is and what its used for. A Phase Connector is used to crack open asteroids or small planetoids for heavy mining, drilling and excavating. Kaz thinks they may need it for the mining of additional dedlanite, something we saw back in Station Theta Black, but we know it likely has to do with the Starkiller Base which is rich in Kyber crystals and other minerals.

Either way, Orka and Flix are very impressed by Kaz and he has earned their respect. Of course, to pay off the equipment he lost, hell have to spend some more time at the Office of Acquisitions.

So, like I said, not a ton to digest there but there were a couple of fun tidbits that came up. One being that according to Flix his father is half Gungan even though he is an avian type species. Orka is skeptical of this fact and I cant imagine how thats possible, but perhaps one day well find out.

This odd fact is simply a matter of timing. The way Kaz gets Bitey to bite into the panel is almost identical to a scene in Lou Anders Pirates Price In that book; Hondo Ohnaka uses a Porg in a similar fashion although instead of hands/fingers as bait, he uses blue puff balls to get the animal to do his bidding. I happen to be reading that book at the same time I viewed this episode, are the two related? Of course not, but it was a strange coincidence.

If I was feeling lacklustre after this episode, next week looks to turn that around with The Doza Dilemma

Synara settles into life on the platform, but her pirate compatriots have other plans for her.

Synara San and Imanuel Doza are two of my favorite characters on the show and I look forward to an episode which features both. I love seeing Synara struggle between maintaining her allegiance to her old life and the new one shes created for herself on the platform. It became clear already theres more to her than meets the eye, and given the opportunity to leave behind her life as a pirate, Im sure shell take it.

As for Doza, its not clear whether that is Torra or her father Imanuel, but Id put money on the later since the show doesnt typically reference Torra by her last name. The word dilemma is interesting as it brings to mind a couple of things, his on again/off again relationship with the First Order and matter of the Imperial uniform hanging in his closet. Either way, looks like hes got a decision to make.

Starting next week Ill be doing a weekly 10-minute Resistance Recap on the ForceCast podcast, so dont forget to check it out when it airs!